Telomerase (T) is a ribonucleoprotein complex that includes the telomerase RNA component (hTR), telomerase associated protein (TP1) and the telomerase catalytic subunit (hTERT). Telomerase has been shown in stem cells and found to be activated in tumor tissues and immortalized cells. We wanted to test whether the expression of the telomerase complex subunits correlate with the enzyme activity in human thyroid tissue. Hence, we determined the expression of hTERT, hTR and TP1 mRNA by RT-PCR and compared the results to telomerase activity as detected by the telomeric repeat amplification protocol (TRAP) assay. Fifteen benign goiters (G), 11 follicular carcinomas (FTC) including 2 oncocytic follicular carcinomas (also called Hurthle cell carcinoma, oFTC), 12 papillary carcinomas (PTC) including 3 microcarcinomas (mPTC), and 12 undifferentiated anaplastic thyroid carcinomas (UTC) were investigated. Experienced pathologists performed histological and pTNM classification in each specimen. RT-PCR analysis revealed that TP1 was ubiquitously expressed in all G and carcinomas. hTR was expressed in 4 out of 15 G, in 2 out of 3 mPTC, in 5 out of 9 PTC, in 5 out of 9 FTC, in all oFTC and in 9 out of 12 UTC samples. Regarding all carcinomas, no statistically significant correlation was observed between hTR-expression and tumor stage, lymph node or distant metastasis. hTERT-expression was associated with malignancy and tumor stage. All mPTC and 13 out of 15 G did not express hTERT, whereas all samples of pT3-4 tumor stage of FTC, PTC, UTC and all oFTC were positive for hTERT. No telomerase activity could be detected in G. Telomerase activity in carcinoma was only measurable in tissues that expressed the catalytic subunit hTERT. Our data indicate that telomerase activity is up-regulated in neoplastic cells. In contrast to TP1 and hTR, hTERT and telomerase activity may be of help in identifying invasive tumors and may be additional markers for classification of benign goiter and malignant thyroid carcinoma. 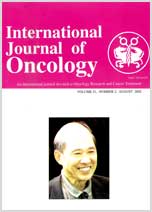