Severe Acute Respiratory Syndrome‑Coronavirus‑2 (SARS‑CoV‑2) has been shown to increase the risk of thrombotic events due to a hypercoagulable state caused by several factors. The case of a 59‑year‑old woman affected by hypertension and metabolic disorders, treated for a COVID‑19 infection who developed cardiac symptoms during the first days of hospitalization is reported. Electrocardiogram analysis and cardiac‑ultrasound confirmed ST‑segment elevation myocardial infarction (STEMI) diagnosis, thus the patient underwent percutaneous coronary intervention, which was successful. This case highlights a possible association between respiratory infection, particularly SARS‑CoV‑2 infection, and cardiovascular events, in particular Acute Coronary Syndrome. The association between these phenomena seems related to a range of factors, including a proinflammatory state and the hypoxemia. Moreover, the association amongst SARS‑CoV‑2 and cardiovascular diseases may be also linked to long‑term sequelae. Thus, further studies are required to better understand the multifaceted and severe complications of this disease.

Severe Acute Respiratory Syndrome-Coronavirus-2 (SARS-CoV-2) has been shown to increase the risk of thrombotic events due to induction of a hypercoagulable state (1). Moreover, the virus enters type II pneumocytes, vascular endothelial cells, and cortical neurons and glia due to its ability to bind to the Angiotensin-Converting Enzyme 2 (ACE-2) (2). ACE-2 is an outer membrane enzyme that hydrolyzes angiotensin-II to angiotensin, the latter of which has a vasodilatory effect (3). During SARS-CoV-2 infection, ACE-2 levels on the cell surface drop (2). Therefore, the vasodilatory effect of ACE-2 products is reduced (4,5).

In the present report, the case of a 59-year-old woman who was admitted to the emergency room (ER) of the ARNAS ‘Garibaldi’, in Catania, Italy, for dyspnea, was found to be positive for SARS-CoV2 following a nasopharyngeal-swab, exhibited COVID-19-induced pneumonia and developed a myocardial infarction following admission, which was successfully treated with percutaneous coronary intervention (PCI) is described (6,7).

A 59-year-old woman was referred to the ARNAS ‘Garibaldi’, in Catania, Italy, for dyspnea. The woman was affected by hypertension that was controlled with angiotensin-II receptor blockers and calcium channel blockers, as well as well-monitored insulin-dependent diabetes and dyslipidemia. She entered lockdown on March 10th, and never left her home since that day, but she was visited by her son and grandson.

At the ER, she was put on oxygen therapy administered through nasal cannula, for a PaO2/FiO2 of 270 as shown by the arterial blood gas (ABG) analysis. Her blood tests showed an increased white blood cell count [19,650 cells/µl; normal value (NV), <11,000 cells/µl], with a normal differential, increased C reactive protein levels (20.63 mg/dl; NV<0.05 mg/dl) and a slightly increased high-sensitivity (hs)-T troponin level (88.1 pg/ml, NV≤20.8 pg/ml), with normal creatine phosphokinase and creatine kinase MB levels. She was assessed by a specialistic cardiologic consultant, which reported no acute cardiac disorder. The chest X-ray showed right medio-basal lung consolidation with a serious perivascular interstitial thickening. Thorax CT scan was not performed, but a nasopharyngeal swab for SARS-CoV-2 was performed, which provided a positive result following a PCR test (Allplex 2019-nCoV assay). At the ER anti-SARS-CoV-2 treatment, which included the standard of care in Italy in that period (2020) (8), with azithromycin 500 mg once daily, hydroxychloroquine sulfate 200 mg b.i.d and enoxaparin 6,000 international units (IU) was started. Corticosteroids treatment were not administered at the beginning due to the patient's diabetes (9), and there were no other standardized therapeutic options at that time (10,11).

The patient was admitted to the COVID center. During the first night, the patient showed persistent dyspnea with oxygen desaturation (~90%) responding to oxygen therapy (Venturi Mask, FiO2 0.40). The ABG analysis performed on the second day of admission showed a PaO2/FiO2 of 196. An electrocardiogram (EKG) was performed due to a drop in her heart rate (from 87 bpm, as stated by the cardiologic consultant, to 58 bpm), and the EKG showed ST elevation (Fig. 1). Hs-T Troponin levels were found to be very high (2,577.5 pg/ml). Due to the difficulties linked to the COVID-19 patients being under isolation, continuous monitoring of her heart rhythm with cardiac telemetry and repeated blood hs-T troponin dosage assessment was performed. Azythromycin and hydroxychloroquine sulfate were stopped after only 3 administrations, and a treatment with acetylsalicylic acid 100 mg once daily was then started. After 1 day of monitoring, a specialistic cardiologic consultation with a cardiac ultrasound was required. At the time of the specialistic consultation, the EKG did not show an ST elevation anymore, but the cardiac US highlighted an hypokinesia of the lower wall of the left ventricle, and an ST-segment elevation myocardial infarction (STEMI) was diagnosed. She was then transferred to the COVID-19 cardiologic intensive care unit of the provincial COVID-net where she underwent a PCI. After one week she came back to the Infectious Diseases ward of the ARNAS ‘Garibaldi’, in Catania, where she was considered to have recovered from COVID-19 both clinically, as her chest XR showed an improvement of both the consolidation and interstitial thickening, and virologically, as two nasopharyngeal swabs taken 24 h apart showed negative results, according to the current European definition of recovery (10).

She was discharged on May 8th and is currently undergoing cardiac rehabilitation (Fig. 2).

The SARS-CoV-2 pandemic has proven to be more clinically varied and challenging than what was initially predicted. Dermatologic, neurologic and vascular manifestations were found to frequently accompany the more noteworthy respiratory syndrome.

Moreover, a hypercoagulable state and thrombotic disorders were highlighted in certain patients. Asymptomatic patients were considered fortuitous, and the only problem connected with their infection was the increased spread of the infection. However, there are now an increasing number of studies being reported on asymptomatic patients showing pulmonary lesions consistent with COVID-19-induced pneumonia (12,13).

Several studies have highlighted the cardio-pathogenic potential of SARS-CoV-2. Myocardial inflammatory involvement has been shown by Inciardi et al (7), whereas Loghin et al (14) reported on a 29-year-old patient with a pseudo acute myocardial infarction. In addition, Chapman et al (15) reviewed the use of high-sensitivity cardiac troponin as a marker of severity of COVID-19, highlighting how an increase in troponin is likely multifactorial in patients with COVID-19.

It is has been shown that respiratory infections are associated with cardiovascular events, particularly with coronary syndromes, due to two primary mechanisms: Hypoxemia and a proinflammatory state (16).

The former, caused by respiratory failure, contributes to activation of the sympathetic system increasing heart rate and cardiac contractility, and thus raising myocardial oxygen demand; the latter of which is caused by the interaction between the pathogen and the host immune system, and seems to increase the inflammatory activity within the atheromatic plaque contributing to its destabilization (17,18). Moreover, inflammation promotes a prothrombotic state via several molecular mechanisms (19,20).

Here, the case of a patient developing symptoms after a non-datable infection with SARS-CoV-2, who therefore did not undergo anticoagulant prophylaxis and developed ischemic heart damage is described. The patient came to the ER complaining of dyspnea and chest pain. She underwent a chest X-ray and ABG analysis, after excluding an acute cardiac disorder from differential diagnosis. She was therefore tested for SARS-CoV-2 and found to be positive, and thus admitted to the COVID-hospital, and after less than 24 h she showed signs of a myocardial infarction. A limitation of the reported case is the lack of a thorax CT scan, not performed by the ER, but this would have assisted in the dating and staging of the SARS-CoV2 infection.

Furthermore, the patient's cardiac conditions deteriorated considerably rapidly, thus there was insufficient time to perform other imaging examinations or to administer specific anti-inflammatory drugs, such as tocilizumab or anakinra, or antiviral therapy, such as remdesivir along with baricitinib. In addition, the patient's hyperglycemia limited the use of corticosteroids.

Literature findings suggested that although patients with SARS-CoV-2 infection may exhibit prolonged RNA shedding for up to 83 days in the upper respiratory tract, no live virus was isolated from culture beyond day 9 of symptoms, despite persistently high viral RNA loads (15,21-24). The patient cleared the virus within 2 weeks of admission. This relatively quick clearance may be a sign of an old infection and the STEMI represented a long COVID-19 vascular complication.

Currently, there are no quick and clinically relevant methods to date an infection. Serology is still not reliable if not for epidemiologic purposes (24) and PCR only highlights the presence of small segments of viral RNA, not distinguishing between viable and non-viable virus.

Stefanini et al (25) performed an observational study on a small number of cases of STEMI in patients affected by COVID-19, which, in 85.7% of their cases was the first manifestation of COVID-19. They commented on their data stating that STEMI may be a long-term sequela of COVID-19. The present case suggests that they may have been correct in suspecting that the incidence of STEMI may surge in the post-pandemic phase.

In conclusion, the present case highlights the association between respiratory infection and, in particular, SARS-CoV2 infection, with cardiovascular diseases, especially with Acute Coronary Syndrome, and the need for mass screening of SARS-CoV-2 infection not only for acute presentations, but also for long term complications to prevent potentially deadly consequences if left unrecognized. Moreover, it also highlights the need for novel diagnostic instruments able to distinguish between an old, non-transmissible infection and a new one (27). The long-term effects of SARS-CoV-2 will continue to be assessed, even when the pandemic slows down, due to its multifaceted complications, which are not completely understood.

MC and AM contributed to drafting of the manuscript. FC, VM and BMC performed the literature search. MG and RB collected the data and assisted in drafting the case report section. MC, EVR, GN and BSC critically revised the manuscript. All authors confirm the authenticity of all the raw data. All authors have read and approved the final manuscript.

Written informed consent was obtained from the patient for publication of this case report. 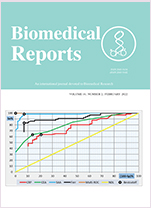