Hepatocellular carcinoma (HCC) is one of the most common malignancies worldwide. Recent advances in imaging technology and implementation of surveillance programs for high-risk patients have led to increased detection of early-stage HCC, making curative therapies possible in some patients (1,2). However, the long-term survival of HCC patients remains unsatisfactory, due to the high frequency of intra- and extrahepatic recurrence (3,4). In particular, the development of advanced HCC with extrahepatic metastasis hinders the use of curative therapies, such as surgical resection or radiofrequency ablation, therefore contributing to poor survival. Prior to the approval of sorafenib, several systemic chemotherapeutic regimens had been evaluated for patients with advanced HCC, although no effective therapeutic protocols were identified (5,6). Two randomized placebo-controlled trials demonstrated a survival benefit associated with sorafenib for patients with advanced HCC, including those with extra-hepatic metastasis (7,8). As a result, sorafenib is currently considered to be the standard treatment for advanced HCC in the United States, Europe, Japan and a number of other countries (9,10). However, although sorafenib appears to prolong survival, this benefit remains unsatisfactory. Therefore, the development of novel agents and/or combinations is required for patients with advanced HCC with extrahepatic metastasis. To design optimal therapies, it is crucial to understand the clinical characteristics and prognostic factors of these patients.

Between April, 1998 and April, 2012, a total of 419 patients who were diagnosed with advanced HCC with extrahepatic metastasis at the Kurume University School of Medicine, Kurume, Japan, were enrolled in this study. Hepatic functional reserve was determined using the Child-Pugh classification system. HCC tumor staging was performed using the 6th edition of the American Joint Committee on Cancer/Union for International Cancer Control TNM classification system (15). At diagnosis of HCC with extrahepatic metastasis, 338 patients (80.7%) had received previous treatment and 81 patients (19.3%) were untreated. Previous treatments for intrahepatic tumors included hepatic resection in 65 patients (19.2%), percutaneous ethanol injection in 82 patients (24.3%), radiofrequency ablation in 83 patients (24.6%), transcatheter chemoembolization (TACE) in 204 patients (60.4%) and hepatic arterial infusion chemotherapy (HAIC) in 197 patients (58.3%). The patients included 353 men (84.3%) and 66 women, with a median age of 66.0 years (range, 15–92 years). Overall, 291 patients (69.5%) were found to be positive for hepatitis C virus (HCV) and 75 patients (17.9%) were positive for hepatitis B virus (HBV) infection. A total of 208, 149 and 62 patients were classified as Child-Pugh class A, B and C, respectively, whereas 55, 186 and 175 patients had T0–2, T3 and T4 stage primary tumors, respectively. Extrahepatic metastases were detected in the lungs in 225 (53.7%), bones in 165 (39.4%), lymph nodes in 91 (21.7%) and adrenal glands in 44 patients (10.5%).

Diagnosis of HCC and evaluation of extrahepatic lesions

The diagnosis of HCC was radiologically confirmed by hyperintensity in the arterial phase and washout in the venous and delayed phase, using either contrast-enhanced computed tomography (CT) or magnetic resonance imaging (MRI) (9) and/or by elevated serum levels of α-fetoprotein (AFP) and des-γ-carboxy prothrombin (DCP). Tumor biopsy was performed in cases in which imaging findings were not consistent with the characteristic features of HCC, or when tumor marker levels were not elevated. To evaluate extrahepatic metastasis, pulmonary lesions were detected on chest X-ray or chest CT, which were routinely performed at the first visit or every 3–6 months during the follow-up period. Additional examinations, such as bone scintigraphy and brain CT or MRI, were indicated upon development of symptoms attributable to extrahepatic metastasis. These examinations were also conducted when AFP and/or DCP levels were elevated and the elevation(s) could not be attributed to the status of the intrahepatic lesion(s). Positron emission tomography/CT studies were performed as a supplemental examination.

Following HCC diagnosis, each patient was carefully followed up with respect to intrahepatic lesions and extrahepatic metastases. Serum biochemistries, AFP and DCP levels were measured and ultrasonography was performed every 1–2 months. Contrast CT or MRI was performed every 2–6 months. Other imaging modalities were used as necessary. The endpoint of this study was the date of death, or last follow-up visit; the closing date was August, 2012. The median duration of the follow-up was 5.8 months (range, 0.2-111.9 months).

The continuous variables are expressed as median values (range). A comparison analysis between patients who received and those who did not receive previous treatment was performed using the Chi-square test for discrete variables and the Mann-Whitney U test for continuous variables. Overall survival was determined by the Kaplan-Meier analysis and the differences between subgroups were compared with log-rank tests. A Cox proportional hazards stepwise model was used for univariate and multivariate analysis, in order to identify any independent variables associated with overall survival. Data from these models are expressed as hazard ratios (HRs) and 95% confidence intervals (CIs). All P values were two-tailed and P<0.05 was considered to indicate a statistically significant difference. The statistical analysis was performed using SPSS software, version 20 (SPSS, Inc., Chicago, IL, USA).

A comparison of the clinical characteristics of patients who received and those who did not receive previous treatment is shown in Table I. Previously treated patients were significantly more likely to have HCV infection, Child-Pugh class B+C and a low primary tumor stage, compared to previously untreated patients. Previously untreated patients exhibited a significantly lower neutrophil-lymphocyte ratio (NLR) and higher aspartate aminotransferase (AST) levels, white blood cell counts, platelet counts and DCP levels, compared to previously treated patients. The major metastatic sites, which were the lungs, bones, lymph nodes and adrenal glands were similar in the two groups.

Comparison of clinical characteristics between previously treated and untreated patients.

Survival and predictive factors in all the patients

Univariate and multivariate analysis of survival in all 419 patients with HCC and extrahepatic metastasis.

Univariate and multivariate analysis of survival in previously untreated patients with HCC and extrahepatic metastasis.

The major sites of HCC metastasis included the lungs, lymph nodes, bones and adrenal glands (13,14,19–21). Yoo et al (20) reported that the most frequent metastatic sites in 251 previously untreated HCC patients with extrahepatic metastasis were the lungs (67.3%), lymph nodes (37.5%), bones (18.3%) and adrenal glands (7.6%). Jun et al (14) indicated that in HCC patients with extrahepatic recurrence following hepatic resection, frequent metastatic sites included the lungs (41.9%), lymph nodes (19.9%) and bones (13.2%). In the present study, the most frequent site of extrahepatic metastasis was the lungs, followed by the bones, lymph nodes and adrenal glands, regardless of previous treatment of intrahepatic tumors. These results are similar to those previously reported and suggest that previous treatment does not affect the metastatic pattern of HCC.

Hepatic reserve is important for hepatic resection and metabolism of anticancer drugs, including sorafenib. Pinter et al (24) reported that the risk of high-grade toxicities associated with sorafenib may be increased in patients with advanced liver dysfunction. Our previous study of advanced HCC patients treated with HAIC demonstrated that liver dysfunction necessitating treatment suspension or discontinuation occurred more frequently in patients with Child-Pugh class B compared to patients with Child-Pugh class A disease (25). Such insufficient treatment may lead to further liver dysfunction, due to intrahepatic tumor progression, resulting in poor survival. Therefore, we considered liver function to be an important predictor of survival.

In this study, we also demonstrated that an elevated white blood cell count associated with a high NLR was a significant independent predictor of survival in HCC patients with extrahepatic metastasis. Recently, various markers of systemic inflammatory responses, including cytokines, C-reactive protein and absolute blood neutrophil or lymphocyte count, as well as their ratio (including NLR), have been investigated for their prognostic roles in cancer. Of these, NLR is one of the most simple and effective markers of inflammation and is linked with poor prognosis in various cancer types (26–28). Several studies demonstrated that an elevated NLR was associated with worse survival in patients with HCC who underwent radiofrequency ablation, TACE, resection and liver transplantation (29–32). However, the exact association between a high NLR and poor prognosis has not been fully elucidated. One possible explanation is that patients with an elevated NLR have relative lymphocytopenia, leading to a weaker lymphocyte-mediated immune response to the tumor due to a decreasing T4/T8 ratio (33). As a result, these patients may experience a more rapid tumor progression and, therefore, have a poor prognosis. Another explanation is that the increased neutrophil numbers may modify and provide an adequate environment for tumor progression and development. Neutrophils have been shown to promote tumor growth and metastasis by secreting chemokines, vascular endothelial growth factor and matrix metalloproteinase-9, which are involved in the angiogenesis that promotes tumor development (34–36). Thus, a high neutrophil level may offer a growth advantage for HCC through the increase of these pro-angiogenic factors, resulting in increased extrahepatic metastasis and worse survival in HCC patients.

In conclusion, we demonstrated that there are differences in the clinical characteristics and no significant differences in survival between patients with advanced HCC with extrahepatic metastasis who received and those who did not receive previous treatment. Moreover, we demonstrated that intrahepatic tumor status, Child-Pugh classification, white blood cell count and NLR are independent predictors of survival in HCC patients with extrahepatic metastasis, regardless of previous treatment of intrahepatic tumors. 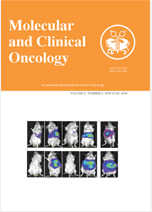