Malignant proliferation is the fundamental trait of tumor cells. The initiation of DNA replication represents a key process for cell proliferation, and has a marked impact on tumorigenesis and progression. Here we report that Sine oculis homeobox homolog 1 (SIX1) functions as a master regulator in DNA replication of cervical cancer cells. The expression of SIX1 was induced by the E7 oncoprotein of human papillomaviruses in cervical intraepithelial neoplasia and cervical cancer. The increase of SIX1 expression resulted in the upregulation of multiple genes related to the initiation of DNA replication, including the genes coding for the proteins in minichromosome maintenance complex (MCM2, MCM3, MCM6), DNA polymerase α-primase complex (POLA1, PRIM1, PRIM2), clamp loader (RFC3, RFC4, RFC5), DNA polymerase δ complex (POLD3) and DNA polymerase ε complex (POLE2). In line with this, the increase of SIX1 expression enhanced DNA synthesis, accelerated G1 to S phase progression, and promoted the proliferation of cervical cancer cells and the growth of cervical cancer. Consistently, knockdown of SIX1 could hamper DNA synthesis, slow down G1 to S phase progression, and suppress tumor cell proliferation and tumor growth. Importantly, SIX1 could more efficiently promote anchorage-independent cell growth. These results suggest that the increase of SIX1 expression could promote tumorigenesis, progression and invasive growth of cervical cancer by promoting DNA replication, and that targeting SIX1 may have significant therapeutic value in cervical cancer treatment.

Cervical cancer is ranked as the second cause of cancer deaths in women worldwide (1–3). Human papillomaviruses (HPV) are considered as the causative agents of most cervical cancers (1–3). The binding of HPV E6 and E7 oncoproteins to tumor-suppressor genes p53 and RB could result in impaired tumor-suppressor-gene function and eventual cell immortalization (2). Although recent studies have identified other equally important molecular events for malignant transformation of cervical epithelial cells, including the activation of certain tumor-promoting genes and pathways (1), E6 and E7 oncoproteins are widely recognized as the driving force in carcinogenesis of cervical epithelium. However, it is not clear whether and how E6 and E7 could promote the progression of cervical cancer after the tumor formation.

The immortalized cells resulting from transfection with HPV DNA have been found to express significantly higher levels of Sine oculis homeobox homolog 1 (SIX1), suggesting that HPV might be able to promote tumor cell proliferation by increasing SIX1 expression (4). SIX1 gene is one of homeobox genes which code for transcription factors functioning as master regulators in proliferation, apoptosis, migration and invasion (5). Similar to many cell cycle proteins, the expression of SIX1 is regulated in a cell cycle-specific manner, where it is transcriptionally upregulated at the G1/S boundary, highly expressed in S and G2/M phases, then degraded via the ubiquitin-proteasome pathway (6). SIX1 is necessary in early embryogenesis, but its expression is lost in most well differentiated tissues. However, SIX1 has been found to be overexpressed in a variety of malignancies, showing the ability to promote tumor growth and metastasis (7). Moreover, SIX1 was reported to abolish the G2 cell cycle checkpoint and upregulate cyclin A1 to promote cell proliferation in breast cancer (8,9). These results implied that SIX1 might play an important role in the proliferation of tumor cells and the development of tumor.

The ability of tumor cells to sustain the uncontrolled proliferation might be influenced by the factors that could modulate DNA replication, cell cycle, apoptosis-resistance, metabolic capacity, etc. In this study we investigated the mechanism underlying the effect of SIX1 on the proliferation of cervical cancer cells. The resultant data showed that SIX1 functioned as a master regulator in DNA replication. SIX1 upregulated multiple genes affecting the initiation of DNA replication, accelerated G1 to S phase progression, and promoted tumor cell proliferation. These results implied that SIX1 might play a crucial role in tumorigenesis and progression of cervical cancer, and also suggested that SIX1 might be a therapeutic target in cervical cancer treatment.

A tissue microarray (TMA) (CIN481) was purchased from Alenabio (Xi-an, China), containing cervical intraepithelial neoplasia (CIN) samples. Tumor samples were acquired by surgery from cancer patients without preoperative treatment, which was approved by the Ethics Committee of the Medical Faculty of Tongji Medical College. Informed consent was obtained from all subjects. The tumor samples were processed into TMA at Outdo Biotech Company (Shanghai, China). TMAs and tissue sections were subjected to immunohistochemical analysis as described previously (11), using the Avidin-Biotin Complex (ABC) Vectastain Kit (Zsgb-Bio, Beijing, China). Rabbit anti-human SIX1 antibody (Sigma-Aldrich) and rabbit anti-human Ki67 antibody (Santa Cruz Biotechnology) were used as primary antibodies. For semi-quantitative evaluation of SIX1 expression in tissue, staining intensity was graded (0, absence; 1, weak; 2, moderate; 3, strong), and assessed using an immunoreactivity-scoring system, HSCORE (12). The HSCORE was calculated using the following formula: HSCORE = ∑Pi(i + 1), where i is the staining intensity of tumor cells and Pi is the percentage of tumor cells at each level of intensity. The percentage of Ki67-positive tumor cells was measured as mean of five hot-spots on one slide from each tumor. Hot-spots were defined as areas with the highest Ki67 intensity. The slides were read by two pathologists and each data point represents the mean of the scores from two pathologists.

Total RNA was extracted from cells with TRIzol reagent (Invitrogen). The relative quantity of mRNA was determined by real-time RT-PCR. Gapdh and EEF1A1 were chosen as reference genes, which were reported as the most reliable combination in cervical cancer (13). The primer sequences are shown in Table I. The expression of genes was quantified using the comparative CT method. The expression level of each mRNA was normalized to that of GAPDH and EEF1A1 mRNAs, and expressed as n-fold difference relative to the control.

Western blot assay was performed as described previously (14). The antibodies were purchased from Sigma-Aldrich, Biorbyt and Santa Cruz Biotechnology.

The BrdU colorimetric ELISA kit (Roche) was used to detect 5′-bromo-2′-deoxyuridine (BrdU) incorporated into newly synthesized DNA, according to the manufacturer’s protocol. Briefly, tumor cells were incubated with BrdU solution for 2–16 h at 37°C, then fixed and denatured and incubated with a peroxidase-conjugated antibody against BrdU for 1 h at room temperature. The cells were then incubated with the tetramethyl-benzidine (TMB) substrate solution and absorbance was read at 450 nm using a multiskan spectrum microplate reader (μQuant Bio-Tek Instruments, USA).

Cells were harvested by trypsinization and fixed in 70% ice-cold ethanol overnight at −20°C, and then washed in PBS and incubated in RNase A (10 U/ml) and propidium iodide (20 mg/ml) for 30 min at room temperature. The cells in different phases were detected by flow cytometry on a FACS Calibur system (Becton-Dickinson) and analyzed using FlowJo software. Serum starvation was performed as described previously (19).

Cells were suspended in 0.35% agar in DMEM (20% FBS) and plated (1.5×103 per well) on a layer of 0.5% agar in culture medium in 6-well plates. After two-week culture, colonies were counted and photographed by phase-contrast microscopy (Nikon, Japan). The size of 20 randomly chosen colonies per well was measured. The average size of colony was calculated as (length + width) × 0.5. The colony formation rate was calculated as the number of colonies/1,500 ×100%.

Female NOD-SCID mice (4 weeks old) were purchased from Beijing HFK Bio-Technology Co. Ltd. (Beijing, China). The studies were approved by the Committee on Ethics of Animal Experiments of Tongji Medical College. The mice were maintained in the accredited animal facility of Tongji Medical College. Intramuscular tumors were initiated by injecting 1×106 tumor cells in 50 μl of media into the hind limb of NOD-SCID mice. The sizes of ectopic tumors were monitored by a caliper and calculated by the formula: volume = (width)2 × length/2. Orthotopic xenograft model of cervical cancer was performed as previously described (20). Briefly, intramuscular tumors were used as donor tumor fragments for orthotopic transplantation into the cervix of NOD-SCID mice. Tumor growth in cervix was dynamically monitored in living mice by optical imaging of luciferase activity using the IVIS Spectrum system (Caliper, Xenogen, USA). After anaesthetization with 3% pentobarbital sodium, mice were imaged 10 min after intraperitoneal injection of 100 mg/kg D-luciferin. Tumor size was measured by three-dimensional reconstruction of image using Living Image version 4.3.1 software.

Each experiment was repeated at least three times independently. SPSS (version 13.0) software package was used for statistical analysis. Results are expressed as mean value ± standard error of the mean (SEM), and interpreted by one-way ANOVA. Differences were considered to be statistically significant at P<0.05.

SIX1 expression is increased by HPV oncoprotein in cervical cancer

In accordance with the potential of SIX1 to promote DNA replication, overexpression of SIX1 in C33a cells resulted in a decrease of the percentage of cells in G0/G1 phase and a concomitant increase of the percentage of cells in S phase (Fig. 5A), indicating more active cell proliferation. After synchronization by serum starvation and following serum addition, C33a-SIX1 cells progressed into S phase faster than corresponding control cells (Fig. 5B), and knockdown of SIX1 in Caski cells resulted in the opposite effect (Fig. 5C and D). These results demonstrated that SIX1 modulated the cell cycle and promoted G1 to S phase progression.

Expression of the proliferation marker Ki-67, was significantly higher in SIX1 highly expressed cervical cancer specimens (Fig. 7A). Comparing with corresponding control groups, the percentage of Ki67-positive tumor cells was increased in C33a-SIX1 tumors and decreased in Caski-shSIX1 tumors (Fig. 7B), indicating more active cell proliferation in SIX1 highly expressed tumors. In line with this, in both ectopic (Fig. 7C) and orthotopic (Fig. 7D) xenograft models of cervical cancer, overexpression of SIX1 in C33a cells significantly promoted tumor growth, while knockdown of SIX1 in Caski cells decreased tumor growth. Taken together, these results demonstrated that SIX1 could promote not only tumor cell proliferation in vitro, but also tumor growth in vivo.

Malignant proliferation is the fundamental trait of tumor cells. The initiation of DNA replication represents a key process for cell proliferation, and has a marked impact on tumorigenesis and progression (19,21). The factors that promote DNA replication are organized in multiprotein complexes that coordinately help to recognize regions of origin, unwind DNA and promote replisome formation (21). The data in this study showed that SIX1 could modulate the expression of several genes related to DNA replication, thus accelerating G1 to S phase progression, promoting the proliferation of cervical cancer cells in vitro, and promoting the growth of cervical cancer in vivo.

MCM complex serves as the primary helicase for unwinding DNA during replication (21). Members of MCM family are proposed as diagnostic or prognostic markers in various cancers due to their increased proliferative potential (24). Studies have demonstrated that CDC6 is necessary for the loading of MCM complex at replication origins (25). Our data in this study showed that SIX1 upregulated the expression of MCM2, MCM3 and MCM6. Bioinformatic analysis also suggested that SIX1 could upregulate the expression of CDC6. Therefore, SIX1 might accelerate the initiation of DNA replication by upregulating the expression of these genes.

SIX1 could significantly promote tumor cell proliferation in vitro. Correspondingly, ectopic and orthotopic xenograft models of cervical cancer further demonstrated that SIX1 could promote tumor growth in vivo. Intriguingly, colony formation assays in soft agar showed that SIX1 remarkably promoted anchorage-independent cell growth, suggesting that the promoting effect of SIX1 on tumor cell proliferation might promote not only the development of primary tumor but also the proliferation of disseminated tumor at metastatic sites. 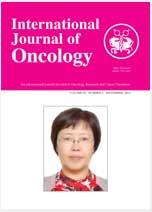