Chorioamnionitis is common in females with prematurely ruptured fetal membranes (PROM). The current diagnosis of PROM and preterm PROM (PPROM) is based on vaginal fluid analysis. The present study investigated the value of serum β‑human chorionic gonadotropin (β‑hCG) and interleukin‑1 (IL‑1) levels in diagnosing chorioamnionitis. In total, 150 term‑pregnancy patients were included in the prospective study. A total of 50 females had normal pregnancies (control group) and 100 had PROM. One hour before delivery, 3 ml venous blood was collected and analyzed. Fetal membrane and placental tissue underwent histopathological analyses. Of the 100 term‑pregnancy females, 56 had PROM and 44 had PROM combined with chorioamnionitis (PROM + C). The serum β‑hCG levels for the control, PROM and PROM + C groups were 7,557.86±2,922.06, 636.96±14,379.10 and 50,310.34±22,874.82 IU/l, respectively. The receiver operating characteristic (ROC) for PROM and PROM + C groups (β‑hCG ≥23,900.50 IU/l) had a sensitivity of 77.5% and a specificity of 78.6%. The level of IL‑1 in the PROM + C group was higher compared to the control and PROM groups (0.58±0.05, 0.12±0.04 and 0.13±0.03 ng/ml, respectively). In conclusion, ROC for the PROM and PROM + C groups (IL‑1 ≥0.38 ng/ml) had a sensitivity of 76.5% and a specificity of 72.6%. Therefore, serum β‑hCG and IL‑1 are potential biomarkers for diagnosing PROM and PROM + C, respectively.

Premature rupture of membranes (PROM) and preterm PROM (PPROM) are common obstetric complications. PPROM is the rupture of membranes in a pregnant female prior to the onset of labor, before 37 weeks gestation and PROM occurs after 37 weeks gestation. The incidence of PPROM is 2.0–3.5% and the incidence of PROM is 10% (1). In particular, PPROM can cause neonatal sepsis, pneumonia and neonatal pulmonary hyaline membrane disease. All these secondary factors can increase the risk of perinatal fetal mortality.

The current diagnosis of PPROM and PROM is based on vaginal fluid analysis. However, samples are easily contaminated, resulting in a high rate of false positives. In addition, there is too little amniotic fluid in PROM to provide an adequate sample and this can result in a high false-negative rate. When PROM is combined with chorioamnionitis (PROM + C), the diagnoses made according to the C-reactive protein (CRP) levels are not specific to intrauterine infections and may be influenced by other factors (1). Therefore, PPROM and PROM diagnostic procedures, particularly when combined with chorioamnionitis, are largely limited. The aim of the present study was to investigate the changes in serum β-human chorionic gonadotropin (β-hCG) and interleukin-1 (IL-1) levels in PROM females and compare these with the levels in females with normal pregnancies. The results indicate that measuring serum β-hCG and IL-1 levels may provide an alternative diagnostic tool for determining infection in parturient females.

A total of 3 ml venous blood was drawn from all the patients ~1 h before delivery. The blood samples were centrifuged for 15 min at 4,929 × g to separate the serum. A chemiluminescence assay (Roche Diagnostics, Madison, WI, USA) was used to determine the β-hCG levels. The reagent was used according to the manufacturer’s instructions (Randox Life Science, Crumlin, UK) and chemiluminescence was measured using a Cobas 6000 analyzer (Roche Diagnostics, Madison, WI, USA).

Following the delivery of the placenta, a membrane sample that was 5 cm from the membrane breach of each patient was obtained. Each sample size was ~5×5 cm. Two placenta tissue samples that were ~2×2 cm in size were also obtained from each patient. One sample was from the placental edge and the other was collected from the center of the placenta. All the samples were fixed with 10% formalin prior to pathological analyses.

PROM was diagnosed using standard procedures (2). Briefly, the patient was diagnosed with PROM if any of the following clinical criteria were observed upon pelvic examination with a sterile speculum: Amniotic fluid leaving or pooling behind the cervix, the fluid had a pH >6.5 and a vaginal posterior fornix smear exhibited a fern-like appearance under the microscope when dried.

Statistical analyses were performed for all the patient parameters between the control, PROM and PROM + C groups. There were no statistical differences between parity, gestational age and patient age for the three study groups (P>0.05). The patient characteristics are summarized in Table I.

Comparative blood analyses between the control and PROM groups.

Comparative blood analyses between the PROM and PROM + C groups.

The study aimed to determine if a combination of two blood analysis indices could be used to improve the sensitivity and specificity of diagnosing patients with PROM + C. The clinical value of combining serum β-hCG and IL-1 level measurements to diagnose PROM + C was evaluated. The results show that combining these two indices had no statistical significance (P>0.05; Table IV).

Evaluation of combined serum β-hCG and IL-1 ROC indices in the diagnosis of PROM + C.

In recent years, much progress has been made in elucidating the multiple factors that contribute to PROM. These include structural changes in the amniotic membrane, infection and immunology (4). Among them, infectious factors are a primary cause. Numerous pregnant females sustain infections prior and subsequent to amniotic membrane rupture and a number of these infections are asymptomatic. Therefore, it is important to diagnose PROM + C to improve maternal and fetal outcomes. The conventional diagnosis of PROM combines patient history, speculum examination, measuring vaginal fluid pH with nitrazine paper and the cervical smear fern test (5). However, these tests are often subjective and have high false-positive rates due to vaginal contamination with blood, urine or semen (6). Non-invasive diagnostic tests include the detection of α-fetoprotein, prolactin, insulin-like growth factor-binding protein-1 (IGFBP-1), placental α microglobulin-1 (PAMG-1) and β-hCG in vaginal fluids (7,8). Bedside strip tests for IGFBP-1 and PAMG-1 are the most commonly used and most accurate assays, but a gold standard non-invasive diagnostic test for PROM does not yet exist (9).

In the current study, an alternative diagnostic test is reported for PROM in the detection of serum β-hCG levels. The levels were significantly higher in patients with PROM and PROM + C, compared to females with normal pregnancies. When evaluated with an ROC curve, the data demonstrate that this application has clinical diagnostic value, as the sensitivity of diagnosing PROM is 71% and the specificity is 76%.

The serum β-hCG levels rise quickly from conception until 8–10 weeks gestation. At 4 months gestation, serum β-hCG levels progressively decline until delivery. As measuring serum β-hCG levels is relatively clear, this measurement alone or in combination with another diagnostic test, may be useful in diagnosing difficult cases of PROM. Conversely, the differences in serum CRP and IL-1 levels were not statistically significant in differentiating between patients with or without PROM. Therefore, these should not be considered as alternative diagnostic indices for PROM.

Early diagnosis of PROM + C is pivotal in improving prognoses. Currently, chorioamnionitis diagnoses are performed by measuring CRP levels and by histopathology. Also, IL-6 is the most studied candidate and several studies have reached different conclusions. A study by Kopyra et al (10) indicated that detecting IL-6 levels is more efficient than detecting CRP levels for diagnosing PROM + C and determining the severity of neonatal infection. However, Tita and Andrews (11) have shown that IL-6 plays a limited role in intrauterine infection and another study has shown that measuring serum IL-6 levels may be helpful in predicting subclinical chorioamnionitis (12).

The present study aimed to determine whether measuring serum β-hCG levels could be used as an alternative approach to differentiate between patients with PROM or PROM + C. The data show that the serum β-hCG levels were significantly higher in patients with PROM + C, when compared to patients that only had PROM. In addition, ROC curves indicated that this index has value as a clinical diagnostic tool (area under the curve >0.5). The sensitivity of diagnosing PROM + C with serum β-hCG levels was 77.5% and the specificity was 78.6%. Although the data indicate that this diagnostic index is no more efficient than measuring CRP levels, the serum β-hCG levels are pregnancy-specific, whereas the CRP levels are not. In addition, Smith et al (13) have concluded that the detection of CRP levels alone cannot predict chorioamnionitis with certainty.

The study performed by Li (14) supports our hypothesis that serum β-hCG levels have a higher value in predicting chorioamnionitis compared to CRP levels. However, the pathophysiological mechanism in which serum β-hCG levels increase during infection has not yet been elucidated. When patients with PROM become infected, villous interstitial inflammatory cell infiltration and placental tissue injury occurs. This can lead to intrauterine hypoxia and cause reactive trophoblastic cell hyperplasia. This may result in increased synthesis and release of β-hCG (14). Another possibility is that intrauterine infection induces inflammatory cells to release more cytokines, such as IL-6 (15). In turn, circulating cytokines may induce trophoblast cells to produce more β-hCG. The severity of chorioamnionitis, as determined by histopathological grading, may be associated with increased β-hCG levels.

IL-1 is a cytokine that is primarily produced by monocytes. Using radiation immunology technology, our previous study found that the IL-1 receptor is highly expressed in the nerve fibers of the rat hippocampus, brain cortex, bulbus olfactorius, cerebellum choroid plexus, hypothalamus, corpus striatum and medulla oblongata (1). IL-1 is produced earlier than other host defense proteins and has a higher sensitivity and specificity. In the present study, serum IL-1 levels were significantly higher in patients with PROM + C when compared to patients with PROM only. Notably, a previous study demonstrated that the IL-1 levels in amniotic fluid are higher during pregnancy and IL-1 levels may be linked to an increased risk of PROM (16). In addition, a study by Puchner et al (17) demonstrated that the IL-1β levels in amniotic fluid are positively associated with preterm delivery. For every unit increase in IL-1β, females are 7.2 times more likely to deliver preterm.

The present study demonstrates that the serum β-hCG and IL-1 levels are potential biomarkers for diagnosing PROM + C. The serum β-hCG levels may also be able to diagnose patients that only have PROM. β-hCG is a pregnancy-specific hormone, therefore it has an advantage in diagnosing PROM and PROM + C. In addition, blood samples are easy to obtain and analyses are cost effective. Using β-hCG, it may be possible to dynamically monitor PROM and detect chorioamnionitis at an early stage. The IL-1 response is rapid and inflammation-specific, adding to its value as a clinical diagnostic tool. Measuring the IL-1 levels is also cost effective. However, the use of these indices for diagnosing PROM + C resulted in a sensitivity and specificity <80%. Sensitivity and specificity must be improved prior to combining serum β-hCG and IL-1 levels for use as an effective diagnostic tool. However, serum β-hCG and IL-1 may be powerful diagnostic tools for PROM + C when evaluated in parallel with other factors. Therefore, further studies are required to investigate this possibility. 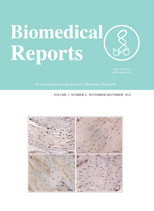