MicroRNAs (miRNAs) are a class of short (approximately 22 nucleotides), non-coding and endogenous RNA molecules that play pivotal roles in the occurrence and development of cancer. The present study aimed to investigate key miRNAs involved in papillary thyroid carcinoma (PTC). Two independent datasets (GSE73182 and GSE113629) were obtained from the GEO database. The differentially expressed miRNAs (DEmiRNAs) between PTC tissues and normal thyroid tissues were analyzed by GEO2R with the Limma R package. Key miRNAs in PTC were identified by the VennDiagram R package. The targets of the key miRNAs were predicted by miRWalk and were functionally enriched by clusterProfiler R package. Five miRNAs including hsa‑miR‑146b-5p, hsa-miR-15a-5p, hsa-miR-21-5p, hsa-miR‑221-3p and hsa-miR-222-3p were identified as key miRNAs in PTC. The expression levels of these key miRNAs were upregulated in PTC. This finding was also confirmed in the other dataset. Target prediction of miRNAs indicated that hsa-miR-146b-5p, hsa-miR-15a-5p, hsa-miR-21-5p, hsa‑miR-221-3p and hsa-miR-222-3p exhibited 2, 41, 3, 14 and 8 target genes, respectively. Enrichment analysis indicated that these key miRNAs were mainly involved in nine biological processes, such as regulation of MAP kinase activity, JNK cascade signaling and regulation of protein serine/threonine kinase activity) and in 28 pathways, including the mitogen associated protein kinase, the sphingolipid, ErbB, Ras and the C-type lectin receptor signaling pathways. In conclusion, the present study identified several key miRNAs in PTC, which serve as potential targets for PTC diagnosis and treatment.

Papillary thyroid carcinoma (PTC) is the main histological type of thyroid cancer, accounting for >80% of all thyroid malignancies (1). Although most patients with PTC have low recurrence rate and exhibit optimal prognosis as determined by long term follow-up, approximately 15% of patients demonstrate aggressive behavior and poor outcome (2,3). To date, the pathogenesis of PTC has not been fully identified. Therefore, detailed investigation of the biological processes involved in PTC can provide insight to the diagnosis and pathogenesis of this disease and to its potential treatment.

MicroRNAs (miRNAs) are a class of short (approximately 22 nucleotides), non-coding and endogenous RNA molecules that can suppress the expression of the corresponding protein coding genes by binding to the 3'-untranslated region (3'-UTR) of the target mRNAs (4,5). Previous studies have suggested that miRNAs can function as regulators of oncogenes or of tumor suppressor genes and are involved in the occurrence and development of cancer (6-10). However, due to the limitations of the traditional biomolecular detection methods, most of the previous studies focused only on the expression and function of single miRNAs in cancer. The application of high-throughput detection technologies used for miRNA expression, such as miRNA expression microarray and miRNA sequencing has enabled the generation of an increasing number of miRNA expression profiles and their deposition in the public databases, such as Gene Expression Omnibus (GEO) and The Cancer Genome Atlas (TCGA). By analyzing these miRNA expression profiles, a comprehensive understanding of the expression levels of specific miRNAs can be attained in a biological sample at a given moment.

In the present study, high-throughput miRNA expression profiles were obtained from the GEO database (corresponding to PTC patients) and key miRNAs in PTC were subsequently identified. Furthermore, the role of specific key miRNAs in the development of PTC was further revealed by investigating the potential function of their associated target genes.

The GEO2R tool (https://www.ncbi.nlm.nih.gov/geo/geo2r/) was used to identify the differentially expressed miRNAs (DEmiRNAs) between PTC and normal thyroid tissues. Multiple-testing corrections were performed based on the Benjamini & Hochberg method in order to correct for false-positive results. The miRNAs with the adjusted P<0.05 and with a |logFC|>1 were selected as DEmiRNAs.

Identification of key miRNAs in PTC

The miRWalk tool (http://mirwalk.umm.uni-heidelberg.de/) integrating three prediction tools (miRDB, TargetScan and miRTarBase) was used to predict the target genes of key miRNAs involved in PTC (15). The genes that were predicted simultaneously by the three tools were identified as miRNA target genes. The cytoscape software was used to construct the miRNA-target gene interaction networks (16).

To analyze the role of key miRNAs in PTC, Gene Ontology (GO) and Kyoto Encyclopedia of Genes and Genomes (KEGG) pathway enrichment analysis were performed using ClusterProfiler package for the miRNA target genes (17). The adjusted P<0.05 was considered to indicate statistically significant difference.

Potential function of of key miRNAs

Bioinformatic analysis for microarray and RNA-seq has been widely used recently to identify potential targets for the diagnosis and therapy of different cancer types (18-20). Xia et al (12) demonstrated that promoter DNA methylation caused silencing of miR-204 that could serve as a potential diagnostic biomarker of PTC based on miRNA expression profiling (GSE113629). Minna et al (11) highlighted that miR-451a expression was downregulated and that it targeted the protein kinase B/mammalian target of rapamycin pathway in PTC based on miRNA expression profiling (GSE73182). In the present study, the two sets of data were analyzed by bioinformatic methods and five key miRNAs (hsa-miR-146b-5p, hsa-miR-15a-5p, hsa-miR-21-5p, hsa-miR-221-3p and hsa-miR-222-3p) were identified in PTC. The expression levels of these key miRNAs were increased in PTC compared with those noted in normal tissues, which was also confirmed by an RNA-seq dataset. By reviewing the relevant literature, the data demonstrated the carcinogenic or cancer-promoting effects of hsa-miR-146b-5p and hsa-miR-222-3p in PTC. For instance, hsa-miR-146b-5p expression was associated with advanced PTC stage and promoted the development of this disease by targeting CCDC6 in vitro and in vivo, which may serve as a promising target for PTC treatment (21). The enhanced expression of miR-222-3p promoted the proliferation of PTC cells, while miR-222-3p knockdown inhibited it (22). Although no direct functional study has been conducted to date on hsa-miR-15a-5p or hsa-miR-21-5p in PTC, the findings by Jiang et al (23) and Zhang et al (24) indicated that these two miRNAs may exert tumor-suppressive effects in PTC. These results are contradictory to the present findings possibly due to tumor heterogeneity or due to the opposing function of these two miRNAs in the development of PTC. The upregulated expression of hsa-miR-221-3p in PTC has also been reported in a previous study (25). However, no relevant functional experiment was performed previously to the best of our knowledge. Therefore, further studies are required to explore the function of these key miRNAs in PTC, notably of hsa-miR-15a-5p, hsa-miR-21-5p and hsa-miR-221-3p. Chen et al (26) explored several types of RNAs involved in the development of PTC based on TCGA and identified 30 differentially expressed miRNAs between PTC and normal samples. However, hsa-miR-15a-5p, hsa-miR-21-5p, hsa-miR-221-3p and hsa-miR-222-3p were not reported in that study (26).

Although the present study identified key miRNAs in PTC based on data mining and bioinformatic methods, the following limitation must be highlighted: Functional experiments are required in future studies to elucidate the mechanism of action of the key miRNAs identified in PTC.

In conclusion, findings of the present study have revealed a group of miRNAs associated with PTC. Therefore, hsa-miR-146b-5p, hsa-miR-15a-5p, hsa-miR-21-5p, hsa-miR-221-3p as well as hsa-miR-222-3p may be regarded as promising diagnostic biomarkers and therapeutic targets for PTC.

The present study was supported by Public Projects of Zhejiang Province (grant no. GF18H040021).

The datasets analyzed in the present study are all available on NCBI GEO (https://www.ncbi.nlm.nih.gov/geo/query/acc.cgi).

JW, SL and XL designed the study. JW and LW wrote the manuscript. JW, LW and YJ performed the bioinformatics analysis. All authors read and approved the final manuscript. 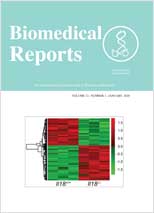