Diagnosis of a case of homozygous constitutional MMR‑deficiency by the use of a gene‑panel in a non-consanguineous family: A case report

Constitutional MMR‑deficiency syndrome (CMMRD) is a rare but severe hereditary syndrome of pediatric cancer caused by bi‑allelic pathogenic variants in one of the mismatch DNA repair genes (MMR): MLH1, MSH2, MSH6, and PMS2. This syndrome occurs when patients inherit altered alleles from both of their heterozygote parents affected by Lynch syndrome. In total, ~150 patients have been identified at present, the majority of which were Caucasian. The present case report described the diagnosis of CMMRD in a Chinese boy with atypical clinical features caused by a homozygous pathogenic variant in MSH6 gene, identified by the use of a gene‑panel. This is the first case diagnosed in a Chinese (Asian) population. These data indicated that CMMRD affects patients of any ethnic origin, implying a potentially high prevalence. Notably, the homozygous bi‑allelic inactivation was caused by a random event in an apparently closed population, as opposed to a consanguineous marriage, additionally suggesting a high risk of CMMRD for individuals living in relatively closed populations.

Lynch syndrome (LS) (OMIM #120435) is one of the most common hereditary cancer syndromes with an autosomal dominant mode of inheritance, caused by monoallelic pathogenic variants of one of the DNA mismatch repair (MMR) genes: MLH1 (MutL homolog 1), MSH2 (MutS homolog 2), MSH6 (MutS homolog 6) and PMS2 (PMS1 homolog 2, mismatch repair system component), or genomic deletion of 3' region of the EPCAM gene by inducing hypermethylation of the MSH2 promoter. Germline heterozygous pathogenic variant carriers have an increased risk of developing LS-associated cancer in their adult life, primarily colorectal and endometrial cancer and less frequently, ovary, gastrointestinal and biliary tract cancer (1). In 1999, bi-allelic inactivation of MMR genes was identified in LS families (2,3). The carriers were diagnosed in their childhood with specific types of cancer distinct from those traditionally associated with LS. In particular, the clinical features mimicked those of neurofibromatosis type 1 (NF1), with café-au-lait macules as the most common manifestation. It was later termed Constitutional MMR deficiency (CMMRD) syndrome (OMIM #276300). Overall, patients were diagnosed with hematological malignancies, brain tumors and LS-associated tumors in their first or second decade of life. Homozygous or compound heterozygous bi-allelic pathogenic variants were identified involving all four MMR genes, although the PMS2 gene appeared to be predominantly implicated, accounting for >50% of the cases. The remaining cases were attributed nearly equally to MSH6 and MLH1/MSH2 genes, respectively (4). An increasing number of CMMRD cases are being recorded. In 2014, the European Consortium of Care for CMMRD reported 147 patients with CMMRD described in the literature (4) and additional cases have been continued (5-8). However, almost all cases were Caucasian, with only a few patients from Pakistani families (9). The present study describes the diagnosis of CMMRD in a young Chinese male.

The patient was admitted to the Lanzhou General Hospital of the Chinese People's Liberation Army in June 2018 for clinical diagnosis and treatment. Blood samples from the patient and his family members (parents and sister) were collected following provision of informed consent.

The patient was a 12-year-old male who was admitted to Lanzhou General Hospital of the Chinese People's Liberation Army because of an anal neoplasm in combination with rectal bleeding. Colonoscopy examination revealed 5 polyps located at sigmoid colon and rectum, the largest of which measured 4x4 cm in diameter (Fig. 1). They were removed by laparoscopic sigmoid colectomy and were identified to be tubular adenomas, with hyperplasia/low-degree dysplasia observed in the largest polyp. As they were not malignant tumors, neither chemotherapy nor radiotherapy was performed. These observations led to the diagnosis of suspected familial polyposis syndrome, in particular the attenuated form, although the young age of the patient did not support this diagnosis. Therefore, genetic testing was requested, after obtaining informed consent from his parents. An NGS approach was applied to screen an 18-gene panel including the principal genes involved in hereditary colorectal cancer syndromes such as APC, MUTYH, STK11, SMAD4, BMPR1R and MMR genes MLH1, MSH2, MSH6 and PMS2. No pathogenic variant was identified in the APC or MUTYH genes, which are major genes implicated in inherited colorectal polyposis (10). Instead, a pathogenic homozygous alteration was identified in the MSH6 gene (NM_0001792): c.3261del, p.(Phe1088Serfs*2), characterized by the deletion of a cytosine residue in exon 5. This deleterious frame-shift variant, leading to the interruption of protein synthesis, has been previously identified in patients with LS, resulting in MSH6 inactivation (insight-database.org/). The underlying homozygous bi-allelic genotype was subsequently confirmed through the genotype analysis of the parents, which indicated that they were both heterozygous carriers (Fig. 2). Therefore, the diagnosis of CMMRD was clearly established at a molecular level.

Subsequent medical examinations of the patient revealed skin pigmentations on his back and arms, with at least one typical ʻcafé-au-laitʼ spot in the left arm, which had appeared at an early age. The results of an upper endoscopy did not show gastric abnormalities. A small bowel examination was not performed, and a magnetic resonance imaging scan of the brain indicated no abnormalities. A bone marrow examination did not identify any malignancy. Regarding the family (Fig. 3), the parents confirmed that there was no consanguinity in the family. His parents, aged 44 and 40 years, respectively, and a sister aged 18 years who was also a heterozygous carrier, were all asymptomatic. They had all undergone recent colonoscopy examinations, the results of which were normal. The mother had also undergone a gynecological examination, the results of which were normal. In the extended family, 2 members were diagnosed with cancer: His paternal grandfather succumbed to lung cancer at the age of 60 and his maternal grandmother succumbed to a brain tumor in her fifties (Fig. 3). Therefore, the origin of the homozygosity of the patient was intriguing. The first hypothesis was that both unrelated parents carried the same pathogenic variant by chance. However, as the variant c.3261del is either absent or very rare and never detected in Asian population (minor allele frequency: 0 out of 50360 alleles = 0% in East and South Asia) (gnomadbroadinstitute.org/), the probability for a marriage occurring between 2 unrelated carriers is quite low. Conversely, by analyzing the NGS sequencing data, it was identified that the patient was homozygous for all SNPs in the MSH6 locus (data not shown), despite the fact that a large number of SNPs exists in the MSH6 locus, with high frequency of heterozygosity in the general population. This result strongly suggested that both parental alleles shared an identical haplotype for this locus. This hypothesis was additionally supported by the fact that the family had been living, for several generations, in a mountain village with limited population. Taken together, it appeared most likely that the frequency of the mutant allele was highly concentrated in this village, which was the cause of the homozygosity for the pathogenic variant without an acknowledged consanguineous relationship.

To the best of our knowledge, this is the first clearly diagnosed case of CMMRD in the Chinese, or even in the general Asian, population, indicating that CMMRD occurs regardless of ethnic origin. The results of the present study demonstrated the benefit of the use of a gene panel for the detection of a causative genetic defect. Non-cancerous colorectal adenomatous polyps as the first clinical sign has been previously reported in a number of patients with CMMRD (9,11-14). Notably, among 19 distinct MSH6 pathogenic variants previously described in CMMRD (15,16), the same pathogenic variant was identified in a case who had a similar clinical presentation; a number of adenomatous polyps at the age of 9(13). However, the existence of a probable genotype/phenotype correlation requires further investigation. A previous study suggested that MSH6 is associated with impaired antibody maturation (17); however, whether this was the case in the patient of the present study is unknown. No immunology testing was performed, but there was no clinical manifestation suggesting immunodeficiency. It is well-known that LS is associated with variable penetrance depending upon the genes involved. In small families, it is likely that the typical phenotype may not be exhibited. Indeed, in the family of the patient of the present study, no clinical manifestations suggestive of LS were observed. Therefore, we hypothesize that a number of new CMMRC cases remain undiagnosed among pediatric patients, due to asymptomatic parents affected by LS. In addition, the results of the present study suggest that the risk of CMMRD may be particularly increased in geographically isolated regions where consanguineous relationships may occur more frequently. Genetic screening should be recommended more systematically to young patients with hematological malignancies, brain cancer and specific types of cancer within the group of LS-associated malignancies, especially those who present with café-au-lait spots, which are common features of CMMRD. Identification of patients with CMMRD is of clinical importance for several reasons. Firstly, for genetic counseling of the family; for example, the parents and the sister of the family in the present study, although asymptomatic at present, are all affected by LS as they are heterozygous pathogenic variant carriers. Therefore, appropriate clinical surveillance should be applied regarding the high risk of LS-associated cancer and options for prenatal/preimplantation diagnostics could be discussed (18). Secondly, for the clinical care of the patient with CMMRD; it is well known that the management of the patients diagnosed with CMMRD is challenging. Guidelines for clinical surveillance would be helpful (4). It is worth noting that recently developed immunotherapy (PD1 inhibition) demonstrated encouraging responses in patients with CMMRD, further emphasizing the importance of identifying patients with CMMRD.

The present study was partially supported by The National Key Research and Development Program of China (grant no. 2016YFC1302601).

MX identified the patient, collected clinical and biological data and initiated the molecular analysis. ZY was responsible for the patient through diagnosis and treatment. HH and PL designed the molecular analysis approach, and conducted the pathogenic variant screening and biological interpretation. QW conducted the data analysis. FG coordinated and supervised the study, was responsible for the clinical diagnosis and treatment of the patient and the evaluation of all data. MX, ZY and QW were involved in the writing and revision of the manuscript. HH, PL and FG reviewed and revised the manuscript. All authors read and approved the final mauscript.

Informed consent was obtained from the patients or the legal representatives of the young patient.

Written informed consent for publication was obtained from the parents of the patient. 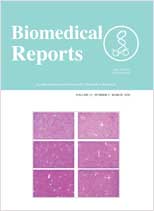