Lung cancer, the leading cause of cancer-associated death worldwide, is the most common type of cancer in both sexes (1). According to the latest Cancer Statistics Report published by the Turkey Ministry of Health in 2015, annual lung cancer rates for the Turkish population are 52.5 cases per 100,000 individuals in males, and 9.0 per 100,000 individuals in females (2).

Exposure to various environmental pollutants, such as smoking, radon, asbestos and air pollution, as well as family history and genetic background exert significant effects on the progression of lung cancer (3,4). Non-small cell lung cancer (NSCLC) is the most common type of lung cancer, accounting for 85% of all lung cancer cases, and chemotherapy is the primary means of NSCLC treatment (5). In the past decade, the treatment protocols for patients with NSCLC have received important updates and additions (6). An increased understanding of the signaling pathways involved in NSCLC have shown that epidermal growth factor receptor (EGFR) mutations are potential markers driving carcinogenesis, advanced survival and response to definite EGFR tyrosine kinase inhibitors (7,8). EGFR is a transmembrane glycoprotein, and one of four members of the ERBB family of tyrosine kinase receptors. Auto-phosphorylation of receptor tyrosine kinase by EGFR initiates signaling pathways that regulate differentiation, metastasis, survival, angiogenesis and proliferation (8,9). There are several mechanisms for aberrant activation of EGFR such as mutations, overexpression, ligand-dependent receptor dimerization and/or independent activation (10). EGFR mutations, primarily located in exons 18, 19, 20 and 21, are widely present in patients with NSCLC, particularly in the adenocarcinoma subtype. The frequency of EGFR mutations in NSCLC differs based on sex, tobacco exposure and ethnicity. The frequency of EGFR mutations in the Asian population is 40-60%, which is higher than the 10-30% reported for non-Asian (Caucasian) populations (11). There are extensive amounts of data regarding the frequency of EGFR mutations in Asian and Western patients with NSCLC; however, the data available from patients of other ethnicities is not sufficient to evaluate the frequency of EGFR mutations based on the ethnicity in patients with NSCLC (7,8,11,12).

Turkey has a multiethnic population due to its geographic location between Europe and Asia continents and its proximity to the Middle-East. The aim of the present study was to determine the frequency of EGFR mutation types in Turkish patients with NSCLC to highlight the importance of regional differences and their correlation with patient characteristics.

A total of 409 formalin-fixed and paraffin-embedded (FFPE) tumor tissue samples of NSCLC adenocarcinoma patients between November 2012 and November 2017, were included in this retrospective study. All patients were diagnosed, followed-up and EGFR mutation testing was performed in the Dokuz Eylul University Hospital. Tumor specimens were evaluated by an experienced pathologist to confirm the NSCLC histology and tumor cell content. The inclusion criteria of the present study were as follows: i) Newly diagnosed and pathologically confirmed non-small cell adenocarcinoma; ii) FFPE tissue section contained ≥75% tumor tissue; iii) there was sufficient tumor tissue sample for molecular testing; iv) the anti-tumor treatment did not begin before sample collection; and v) informed written consent was obtained from patients. Exclusion criteria were as follows: i) Tissue section contained <75% tumor tissue; ii) insufficient tumor tissue samples were excluded; iii) patients were receiving anti-tumor treatment at the time of sample collection; iv) cases with no informed consent. Based on these inclusion and exclusion criteria, 409 patients met the all criteria for inclusion. Tumor sections (10 µm) were sectioned from each FFPE tissue block containing at least 75% tumor tissue for genotyping. Patient demographic data were obtained from the hospital records. This data included the age, sex, smoking status, primary tumor location and metastatic status. The present study was based on pathological archived material and was approved by Dokuz Eylul University, Non-invasive Researches Ethics Committee (Izmir, Turkey) (approval no. 300-GOA, 2011/28-03). Written informed consent was obtained from all patients. The present study also conformed to the principles outlined in the Declaration of Helsinki (13).

Based on the Open Source Epidemiologic Statistics for Public Health analysis results, a total of 409 NSCLC adenocarcinoma patients were included in the present study, and the clinicopathological characteristics of these patients are described in Table I. Of these patients, 73.1% (n=299) were male, 26.9% (n=110) of the female. The median age of all the patients was 60 years (range, 23-89 year) and 58.9% of patients had a metastasis at the time of diagnosis. There were marginally more smokers among the patients (60.1%) and 60.6% of patients had tumors localized to the right lung.

Genomic DNA was extracted from 10-µm thick tumor tissue sections using the QIAamp DNA FFPE Tissue kit (Qiagen, Inc.) according to the manufacturer's protocol. A total of 3-5 sections were used depending on the size of the tumor tissue in the section. Tissues were deparaffinized in xylene, washed with absolute ethanol and air-dried. The lysis process was performed using proteinase K at 56˚C for 1 h. Genomic DNA with a concentration of at least 15 ng/µl was required for genotyping; the quality and quantity of the extracted DNA was determined using a NanoDrop 2000 UV-Vis Spectrophotometer (Thermo Fisher Scientific, Inc.) (14).

The INFINITI EGFR assay (AutoGenomics, Inc.) was used to detect the most common EGFR mutations in exons 18, 19, 20 and 21 (Table II). The INFINITI method is a BioFilmChip-based microarray assay, and the system is designed to detect fluorescence signals of labeled DNA targets hybridized to the chip. This assay includes several processes: i) DNA extraction from tumor tissue, ii) PCR amplification, iii) specific primer extension with fluorescent labels, iv) hybridization to BioFilmChip, and iv) signal detection using the built-in microscope and results presentation. The ‘Zip-code’ bound to allele-specific primers can only be extended with fluorescent labels if the specific primer matches with the wild-type or mutated DNA strand. After elongation of the mutated sequences for EGFR exons 18, 19, 20 and 21, and also the wild-type DNA strand, all Zip codes were hybridized to the designated area (15,16). Briefly, genomic DNA (15-60 ng) was amplified by using PCR master mix (AutoGenomics, Inc.) in a total volume of 20 µl and purified by using shrimp alkaline phosphatase and exonuclease I treatment SAP/Exo (Affymetrix/USB Products Inc.) on a thermal cycler (BioRad Laboratories, Inc.). The thermocycling conditions used were: 94˚C for 2 min; 10 cycles of 94˚C for 15 sec and 67-57˚C for 15 sec (the temperature was decreased by 1˚C each cycle); followed by 30 cycles of 94˚C for 15 sec and 57˚C for 15 sec. The SAP/Exo procedure was performed as three steps: i) at 37˚C for 60 min; ii) at 94˚C for 20 min; and iii) holding at 4˚C. The samples were analyzed using INFINITI Analyzer (Autogenomics Inc.) according to the manufacturer's protocol. Fluorescently labeled nucleotides were incorporated into the targets via allele-specific primer elongation on the INFINITI® analyzer (Autogenomics Inc.) then samples were hybridized to BioFilm chip microarrays (AutoGenomics Inc.). Scanning, signal detection and analysis were performed using INFINITI Qmatic 6.6 software (Autogenomics Inc.). One microarray chip was used for each case.

The framework of Cancer Statistics Report of Turkey Ministry of Health, ‘Open Source Epidemiologic Statistics for Public Health’ (Available from, openepi.com/SampleSize/SSPropor.htm) was used to determine the required case numbers to include in the present study (17).

Characteristics of patients with EGFR mutations.

Frequency of detected EGFR mutations in each exon.

[i] a Most common mutation. EGFR, epidermal growth factor.

NSCLC is one of the most common types of cancer in the world, including in Turkey, and is the leading cause of cancer-associated deaths in both men and women worldwide (1). The incidence of NSCLC is higher amongst males and smokers (19,20), a pattern which was also observed in the present study. Male patients accounted for 73.1% of all NSCLC patients and smokers accounted for 60.1% of all patients.

EGFR is an important marker driving carcinogenesis and the response to definite EGFR tyrosine kinase inhibitors. EGFR mutations are used as predictive biomarkers to understand the clinical response to EGFR tyrosine kinase inhibitors, and 70-80% of patients have benefited from tyrosine kinase inhibitors based therapies. This reveals the clinical importance of EGFR mutational status for therapeutic decision-making (7,8). To the best of our knowledge, the present study represents the largest molecular epidemiological dataset of EGFR mutation status in a Turkish population. Previous studies have reported that EGFR mutation frequency shows variability according to regional differences and ethnicity, and Turkey has a multiethnic population, due to its geographic location between Europe and Asia and its proximity to Middle-East region (21). Therefore, determining the genetic distribution of EGFR mutations, may have clinical relevance for therapeutic decision making.

In the present study, EGFR mutations were detected in 16.6% of patients, consistent with the frequency of European based studies, such as in Greek, Spain and Poland (22-25), but not consistent with previously published studies from Turkey and the Middle-East (Table VII) (26-30). Previous studies from Turkey, showed higher frequencies (44 and 42.6%, respectively) in terms of overall mutation rates, and the primary reason underlying the difference may be due to the small cohorts used in the previous studies (29,30). The overall EGFR mutation frequency was 47.9% in Asian patients and 19.2% in Western patients (8). Asian and Caucasian patients also have different molecular epidemiological data in terms of EGFR status (31).

The most common mutations were detected in exon 19 and 21 (6.4 and 7.3%, respectively), consistent with previous studies; however, it has been shown that mutation frequencies can differ in EGFR exons (32,33). The variations in EGFR mutation frequencies between countries are likely the result of differences in case selection for testing and case number of tested groups, smoking habits and ethnicity (34).

We would like to thank Mrs. Nurcin Kayacik (Dokuz Eylul University Hospital, Molecular Oncology Laboratory) for her technical support during the tumor tissue collection process and preparation of DNA isolation.

This study was supported by Dokuz Eylul University-Scientific Research Projects (grant no. 2018.KB.SAG.097).

The study was based on pathological archived material and was approved by Dokuz Eylul University, Non-invasive Researches Ethics Committee (Izmir, Turkey) (approval no. 300-GOA, 2011/28-03). Written informed consent was obtained from all patients. 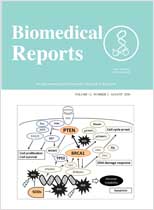