Colorectal cancer (CRC) is one of the most lethal cancers in the world. In Japan, cancer-related death from CRC was estimated to be the most frequent cause of female cancer-related death, and the third most frequent cause of male cancer-related death in 2008 (1). Recent advances in chemotherapy have been improving the overall survival of patients with metastatic CRC, however, the prognosis of patients with metastatic CRC remains relatively low. Therefore, identification of prognostic factors that could select CRC patients at a high risk of recurrence would be helpful for planning better treatment strategies.

Cancer cells generally are hyper-proliferative, have a high rate of glycolysis and exert anti-apoptotic effects compared to surrounding normal cells. Glycolysis is a key step for the acquisition of ATP in all mammalian cells, including cancer tissues. Metabolism of glucose via glycolysis results in the production of high concentrations of lactate, which must be transported out of cells (2). This transport of lactate across the plasma membrane is mediated by a family of protone-coupled monocarboxylate transporters (MCTs) (3).

The MCT family has 14 members (3). Of these members, only MCT1-MCT4 catalyze the proton-coupled transport of lactate (4–8). The distribution of MCTs is different by cell type. While MCT1 is expressed in most cells (3,4), the highest expression of MCT2 is observed in the testis (9), and MCT3 expression is largely restricted to the retinal pigment epithelium (3,4). On the other hand, MCT4 is strongly expressed in highly glycolytic cells, such as white muscle (10), white blood cells (4,7) and tumors (11–13). Recently, we reported that MCT4 expression of lung cancer cell lines are strongly correlated with invasion activity in Matrigel (14).

Cancer cells produce a large amount of lactic acid (2), which is generated through glucose metabolism and inefficient vascular clearing, resulting in an acidic microenvironment within many solid tumors (15). The partial pressure of oxygen within human cancer is frequently much lower than that of the surrounding normal tissue, and intratumoral hypoxia is associated with an increased risk of local spread, metastasis and patient mortality (16).

In order to prevent apoptosis due to cellular acidosis, tumor cells increase their proton efflux through pH regulators, such as proton pumps, sodium-proton exchangers, bicarbonate transporters and MCTs, which have been described as being up-regulated in tumor cells (17). However, only few studies have evaluated the immunohistochemical expression of MCT4 in cancer specimens (11–13). The significance of MCT4 expression in CRC has not been fully evaluated, especially with regard to its relationship to prognosis. Therefore, the present study investigated the relationship between clinicopathological factors and the immunohistochemical MCT4 expression on the plasma membrane of the primary CRC cells, and prognostic factors of primary CRC patients.

A total of 105 patients with primary CRC who underwent surgery at the Department of Surgery 1 of the University Hospital of Occupational and Environmental Health, Japan, from 1997 to 2000, were recruited for this study. The clinical data of these patients are summarized in Table I. Informed consent was obtained from all patients prior to the study. No patients had received chemotherapy or radiotherapy before surgery. The clinicopathological findings were determined according to UICC tumor-node-metastasis (TNM) classifications (18).

The immunohistochemical staining (IHC) of MCT4 was performed on formalin-fixed 2-μm sections of tissues embedded in paraffin. The 2-μm sections were deparaffinized in xylene and then rehydrated. Endogenous peroxidase was blocked with 3% hydrogen peroxidase in methanol for 10 min. After washing with phosphate-buffered saline (PBS), the sections were pre-incubated with 10% rabbit serum albumin in PBS for 10 min at room temperature. The slides were then incubated with the MCT4 antibody for 1 h at room temperature (dilution 1:100). Antibody binding was visualized using the EnVision+ Dual link system and diaminobenzidine as chromogen (Dako Cytomation, Kyoto, Japan). The slides were counterstained with methyl green and mounted.

The tumors were staged by two pathologists, who had no prior knowledge of the results of the assays, according to UICC TNM classifications 7th edition (18). Clinicopathological factors, such as age, gender, tumor size, histological type, depth of invasion, lymph node metastasis, distant metastasis and TNM staging, were analyzed for an association with MCT4 expression.

The relationships between the parameters were also statistically assessed using the Chi-square test with the Stat View-J statistical package (version 5.0; SAS Institute, Inc., Cary, NC, USA). The Kaplan-Meier method was applied to determine survival, and statistical significance was calculated using the log-rank test. Both univariate and multivariate analyses of survival were conducted using the Cox proportional hazards model. Since the number of patients with TNM stage IV was the same as the number of patients with distant metastasis, distant metastasis was excluded as a variable from the multivariate analysis. Statistical significance was established at p≤0.05.

Table I shows the profiles of the 105 patients diagnosed with primary CRC recruited for the present study.

Association between the expression of MCT4 and clinicopathological factors of all patients with colorectal cancer.

Univariate analysis of the clinicopathological factors and the expression of MCT4 in patients with colorectal cancer.

Multivariate analysis of the clinicopathological factors and the expression of MCT4 in patients with colorectal cancer.

Our study indicated that positive MCT4 expression on the plasma membrane significantly correlated with tumor size, depth of invasion, lymph node metastasis, distant metastasis and TNM staging. However, positive MCT4 expression did not correlate with age, gender, lymphatic invasion, venous invasion or the histopathological type (Table II). These data indicate that positive MCT4 expression on the plasma membrane may reflect the tumor progression in CRC. Several studies have indicated that the behavior of cancer cells which express MCT4 is different from cells not expressing MCT4. According to an experimental study using lung cancer cell lines, the invasion of the lung cancer cells was reduced by knockdown of MCT4 using MCT4 siRNA (14). Gallagher et al indicated that the silencing of MCT4 in MDA-MB-231 cells impaired their migration (19). Since lactate is co-transported out of the cells with a proton, silencing MCT would be expected to decrease the intracellular pH and increase the extracellular pH. Integrin-mediated cell migration is pH-sensitive, and is inhibited by alkalization of the extracellular environment (20,21). Therefore, these studies indicated that a high expression of MCT4 may induce tumor progression.

The accumulation of lactate within tumors has been reported to be associated with a poor clinical outcome (22,23). It is well established that increased rates of glycolysis in hypoxia are associated with greater expression of glycolytic enzymes, including the glucose transporter, Glut-1, due to a transcriptional mechanism involving a hypoxia inducible factor (HIF-1α) (24). Ullah et al indicated that MCT4, like other glycolytic enzymes, is up-regulated by hypoxia through a HIF-1α-mediated mechanism (25). Chronic hypobaric hypoxia has been reported to up-regulate MCT4, but not MCT1, in rat skeletal muscle (26), zebra fish gills (27) and certain tumor cells (28), at least in part, through a transcriptional mechanism. These studies suggest that the accumulation of lactate within tumors up-regulates MCT4 through a HIF-1α-mediated mechanism and that this correlates with a poor clinical outcome.

Many inhibitors of the MCT family have been reported (31). DDS is an anion transporter inhibitor and suppresses the function of all proteins in the MCT family. Quercetin and simvastatin inhibit human MCT1 and human MCT4, respectively. Simvastatin has been studied for the treatment of several malignancies, such as colon cancer, prostate cancer and chronic lymphocytic leukemia (32–35). In fact, a phase II study of simvastatin plus irinotecan, 5-fluoruracil and leucovorin as first-line chemotherapy has been carried out (33).

The authors thank Ms. Yuko Ueda, Hitomi Arimasu and Miyuki Warashina for the technical assistance. This study was supported in part by a Grant-in-Aid for Scientific Research from the Ministry of Education, Science and Culture of Japan. 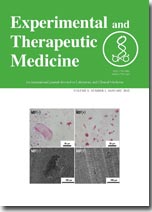