Giant bladder stones are rare in younger patients. Herein, we report a case of acute renal failure in a 31‑year‑old male with a giant bladder stone. The patient presented with lower urinary tract symptoms and urinary retention with milky‑white urine. An emergency suprapubic cystotomy was performed and an 11‑cm oval, solid stone was removed. Post‑operative creatinine levels progressively decreased to normal and the patient exhibited smooth urination and good recovery at follow‑up. A comprehensive physical examination and thorough investigation of the patient's medical history are required during clinical evaluation, diagnosis and treatment, thus preventing misdiagnoses and ensuring prompt treatment.

Bladder stones are a common type of urinary tract stone (1). With the development of medicine and the improvement of living standards, the incidence of bladder stones has progressively decreased. Patients with bladder stones experience a sudden interruption of urination, as well as laborious urination and urinary retention (1). Secondary stone formation occurs in most elderly males due to benign prostatic hyperplasia. The incidence of bladder stones among younger patients is low and that of large stones is rare. The formation of a large stone occurs over a long period of time and it may be complicated by concurrent serious infections, requiring open surgery for stone removal (2). Although rare in Europe and the US, giant bladder stones are frequently reported in developing countries and tropical regions (3). The present study reported the case of a young male with a giant bladder stone that led to acute renal failure. This report may serve as a reference for clinicians.

The patient was administered imipenem antibiotic treatment and a retropubic cystotomy was performed under general anesthesia to remove the stone. During the operation, pyuria in the bladder (milky white urine accompanied by a foul odor) was encountered. A large amount (at least 300 ml) of milky pus with foul odor leaked out. Bacterial culture results revealed E. coli infection. The stone was huge and its bottom surface closely adhered to the bladder wall, thereby complicating its removal. The adhesion was carefully separated and the stone was removed; the bottom surface of the stone was irregular (Fig. 2). It was planned to place a double ureteral stent, but as the urine in the bladder was cloudy, the mucosa in the triangular and ureteral orifice area was rough and the visual field was poor, it was not possible to accurately locate the ureteral opening. After discussion, it was decided to close the bladder and terminate the surgery. A catheter and drainage tube were inserted and it was observed that the color of the patient's urine was still milky white on the second day, but it gradually turned clear later. This was the urine stored in the kidney that entered the bladder through the ureter, as the bladder had been removed from the place where the ureter was compressed. It was originally planned to keep a ureteral stent to drain the huge hydronephrosis. However, the bladder mucosa was widely damaged, with severe infection and edema; hence, it was not possible to locate the ureteral orifice. It was not possible to insert the ureteral stent, and hence, the urine continued to drain and bladder irrigation was performed. The color of the patient's urine gradually turned normal, the renal function improved and the drainage became smooth; no further nephrostomy was performed.

Following the surgery, the patient's body temperature dropped. Milky-white urine continued to drain from the catheter on the day after the operation; however, with continuous bladder irrigation, the color of the urine turned clear. After the operation, imipenem administration was continued as an antibiotic for 3 days. The antibiotic was subsequently changed to ceftizoxime for 4 days, according to the drug susceptibility test results. The double hydronephrosis significantly improved when re-examined via ultrasound and the patient's white blood cell count, serum creatinine, procalcitonin, C-reactive protein and neutrophil ratio also improved significantly (Fig. 3). The patient was discharged 2 weeks after surgery.

Giant bladder stones >100 g in weight are rare in modern urology, particularly in developed countries in Europe and the US (4,5). Cases of bladder stones remain common in developing countries and poorer areas. Numerous patients are unable to afford medical treatment and thus delay seeking treatment for urinary symptoms, leading to bladder stones. Bladder stones are frequently misdiagnosed as urinary tract infections. The symptoms improve after oral antibiotic treatment, but the stones are not eradicated. With the improvement of the economic situation in China, the annual incidence of bladder stones has been progressively decreasing (6). Secondary bladder stones are more common in older males with benign prostatic hyperplasia (7). The present study reported the case of a young patient with no previous history of prostatic hyperplasia, who, at the age of 31 years, presented with a giant bladder stone that led to severe bilateral hydronephrosis, ureteral dilatation and renal failure. Renal failure is rare in patients with giant bladder stone, whose most common complaints are repeated and long-term lower urinary tract symptoms, frequent urination, urgency and severe urinary tract infections (8,9). The present patient reported that he had experienced frequent urination for 5 years but had not sought medical attention. When the symptoms worsened, the patient visited his doctor but was not comprehensively examined, and the patient was misdiagnosed with prostatitis. The treatment the patient received was ineffective. After remote consultation, a giant bladder stone was diagnosed via urinary CT evaluation and the patient was referred to our department for surgical treatment. Although the patient had urinary retention, it was not possible to insert a catheter because the stone was incarcerated in the triangular area and blocked the internal opening of the urethra. During the operation, the giant stone was found to be closely adherent to the bladder mucosa and to compress the double ureteral orifice, thereby resulting in ureteral dilatation, hydronephrosis and renal failure. Surgery was the only curative procedure available. Several researchers argue that cystoscopy should be the preferred method for diagnosing bladder stones (10). However, cystoscopy was not appropriate in the present case, given the presence of severe urinary tract infection, which is a contraindication to cystoscopy. Furthermore, it was not possible to insert a catheter, as the giant stone blocked the internal opening of the urethra. This was an additional reason why it was not possible to successfully perform cystoscopy on this patient, and it would have only resulted in increased pain and discomfort for the patient. Abdominal radiography, pelvic ultrasound and CT examination may diagnose most cases of giant bladder stone (11,12). Considering that the giant bladder stone was also associated with lower back pain in the present case, a CT scan of the urinary system was performed to evaluate the state of the entire urinary system. CT scans are more accurate than other imaging modalities and inspection methods for detecting giant bladder stones, evaluating the state of double hydronephrosis and determining whether these are combined with double ureteral stones (11,13). The surgical method for removing bladder stones is either transurethral lithotripsy or open surgery, although almost all giant bladder stones reported in the literature are treated with open cystotomy (14-16). Since the bladder stones are large and most patients have concomitant severe urinary tract infections, the efficiency of transurethral lithotripsy is low. Furthermore, transurethral lithotripsy increases the risk of infection and has a long operation time, increasing the incidence of post-operative complications. However, open surgery for removing complete stones has shorter operation times (2,17). In the present case, immediate relief of the obstruction caused by the giant stone was of paramount importance and the operation time for removing the stone was ~40 min. A large amount of turbid, milky-white urine was removed from the bladder during the operation. The patient's condition was further complicated by renal failure, which required the operation time to be minimized to avoid continuous kidney damage caused by the anesthetic drugs. Visibility within the bladder during endoscopic exploration was poor. The adhesion of the intravesical mucosa and the calculus had caused extensive damage to the mucosa, leading to mucosal hemorrhage and edema, thereby making the localization of the double ureteral orifice difficult. Therefore, no double ureteral stent was placed during the operation. After the operation, the patient's creatinine level continued to decrease from 744 µmol/l on admission to 80 µmol/l at discharge. The white blood cell count, C-reactive protein level and procalcitonin level also continued to decrease; renal function improved, the urine color gradually cleared and the infection was controlled. The patient was successfully treated and was satisfied with the treatment outcome. In this patient, a stone composition analysis should have been performed to determine the reason for the occurrence of such a huge stone; however, the patient's family had discarded the stone and hence, it was not possible to perform the stone composition analysis. Such an analysis is warranted in future cases.

We consider the present case to be of great interest. This was a young patient with no lower urinary tract obstruction, such as prostatic hyperplasia or urethral stricture that causes secondary bladder stones similar to those to occur in elderly patients. Furthermore, this case demonstrates that acute renal failure may be a rare complication of giant bladder stone; timely treatment prevented obvious hyperkalemia in this patient. Finally, the present report highlights the requirement for conducting a comprehensive physical examination and thorough investigation of the patient's medical history during clinical evaluation, diagnosis and treatment. The present case should not have been misdiagnosed as prostatitis or a common urinary tract infection, highlighting the requirement to conduct the necessary examinations and tests to obtain a definite diagnosis. The range of symptoms of the present case was caused by a giant bladder stone that required timely open surgery. Any further delay in the patient's diagnosis may have had catastrophic consequences, highlighting the requirement for clinicians to be vigilant and take the necessary precautions.

All data generated in the present study are included in the article and figures.

The study was conducted according to the guidelines of the Declaration of Helsinki and approved by the Ethics Committee of Hexi University affiliated Zhangye People's Hospital (Zhangye, China).

Consent was obtained from the patient for the publication of the patient's data/images included in this case report. 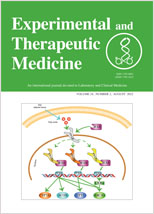