Effects and relationship of ERK1 and ERK2 in interleukin-1β-induced alterations in MMP3, MMP13, type II collagen and aggrecan expression in human chondrocytes

Interleukin (IL)-1β plays an important role in the pathogenesis of osteoarthritis and catabolic processes in articular cartilage. Growing evidence suggests that ERK1/2 activation is involved in IL-1β-mediated matrix metalloproteinase (MMP) 3, MMP13, type II collagen and aggrecan expression in chondrocytes. To investigate the respective effects and the relationship of ERK1 and ERK2, knockdown of ERK1 and/or ERK2 was performed in human chondrocytes using specific small interfering RNAs (siRNAs), and the cells were treated with IL-1β (10 ng/ml) for 24 h. Uninfected chondrocytes treated with IL-1β (10 ng/ml) were used as a positive control. Other cells cultured without IL-1β or siRNA treatment were used as a negative control. The mRNA levels of MMP3, MMP13, type II collagen and aggrecan were evaluated by quantitative real-time PCR. The protein levels of MMP3 and MMP13 in the culture medium were examined by ELISA. The protein levels of type II collagen, aggrecan, ERK1/2 and phospho-ERK1/2 were evaluated by western blotting. The results indicate that IL-1β enhances MMP3 and MMP13 expression and inhibits type II collagen and aggrecan expression. Activation of the MAPK/ERK pathway was observed. Knockdown of ERK1 or ERK2 significantly reversed these effects to similar degree. Combined knockdown of ERK1 and ERK2 displayed synergistic effects. ERK1 and phospho-ERK1 or ERK2 and phospho-ERK2 were inhibited by knockdown of ERK1 or ERK2, respectively. No compensatory effect by up-regulation of the opposite isoform was observed. The combined knockdown suppressed ERK1/2 and phospho-ERK1/2. The data suggest that although inhibition of both ERK1 and ERK2 is more effective, inhibition of either ERK isoform may be sufficient and could be used for novel therapies or as drug targets for pharmacological intervention in cartilage breakdown in osteoarthritis. 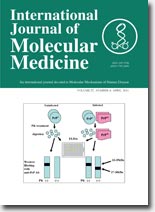