ORAOV1 is a probable target within the 11q13.3 amplicon in lymph node metastases from gastric adenocarcinoma

The lymph node metastatic (LNM) spread of tumor cells is a frequent event in the initial process of cancer dissemination and is a powerful independent prognostic indicator in gastric adenocarcinoma (GAC). High density genomic arrays were conducted to identify molecular markers associated with lymph node metastasis in GAC. In the genome-wide profile, large copy number gains involving chromosomes 1p, 3q, 8q, 9q, 11q, 16p, 19p, and 20q (log2 ratio >0.25) (>40% of patients) were more prevalent than copy number losses. The most notable finding was copy number gains at the long arm of chromosome 11, which occurred in 75.0% of lymphatic metastasis GAC cases, and the delineated minimal common region was 11q24.2-q12.1. More specifically, 2 amplified (>1 log2 ratio) loci on the 11q13.3 region were detected in 12.5% of the cases. The first locus, covers a region of ~7.7 Mbp, and comprises the representative oncogene of cyclin D1 (CCNDI). This finding occurred in 12.5% of the cases. Additionally, an oral cancer overexpressed 1 (ORAOV1) gene was identified as a probable target within the 11q13 amplicon, which previously was not assumed to play a pathogenic role in GACs (12.5%). A second locus spanning 7.8 Mbp on 11q13.3 without associated genes also showed high-level amplifications in 12.5% of the GACs. This study indicates that the long arm of chromosome 11 harbors protooncogenes that are associated with lymphatic metastasis formation and the ORAOV1 gene at the 11q13.3 region could be a potential target and serve as an indicator for the presence of occult metastases in GAC. 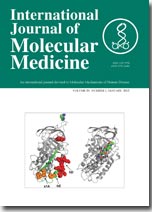