Genotype analysis of the NRF2 gene mutation in lung cancer

Lung cancer is the leading cause of cancer-related death worldwide, causing an estimated 1.4 million deaths in 2010 (1). The discovery of mutations in the epidermal growth factor receptor (EGFR) kinase, and fusions involving anaplastic lymphoma kinase (ALK), has improved the treatment of patients with lung adenocarcinoma, the most common type of lung cancer (2–4). The discovery of gene fusions involving ROS1 and RET may also facilitate the treatment of adenocarcinomas (5–7); however, targeted agents developed for lung adenocarcinoma are largely ineffective against the second most common type of lung cancer, lung squamous cell carcinoma (SqCC).

The comprehensive genomic characterization study of SqCC has identified several somatic mutations of nuclear factor (erythroid derived 2)-like 2 (NFE2L2) (8). NRF2 (gene name NFE2L2) is a master transcriptional activator of genes encoding numerous cytoprotective enzymes that are induced in response to environmental and endogenously derived oxidative/electrophilic agents (9–11). In normal cells, NRF2 is a cap ‘n’ collar basic leucine zipper transcription factor. NFE2L2-deficient mice are highly susceptible to chemically induced carcinogenesis of multiple organs (12,13). A previous study showed that RNAi-mediated silencing of NRF2 gene expression in non-small cell lung cancer inhibited tumor growth (14). NRF2 gene promoter polymorphism has been identified and may be correlated with carcinogenesis (15). More recently, an NRF2 gene mutation was identified in lung cancer cell lines and carcinoma (16). Somatic mutations occurring in the coding region of the NRF2 gene were more common among patients with a history of smoking or suffering from SqCC and were correlated with poor prognosis (16,17).

The standard for experimental detection of mutations is direct sequencing of DNA samples from tissues. For known mutations, real-time polymerase chain reaction followed by melting curve analysis, using hybridization probes, is highly sensitive, rapid, and an efficient alternative approach to mutation detection (18–20). To determine the NRF2 gene status in Japanese lung carcinoma patients for screening and diagnostic purpose, we investigated the NRF2 gene mutation status, an N-terminal domain, using real-time reverse transcription-PCR assay using LightCycler (20). With this method, 32 samples were genotyped within 1 h without the need of any post-PCR sample manipulation. The findings were compared to the clinico-pathologic features of the lung cancers.

The study group included 262 lung cancer patients who had undergone surgery at the Department of Surgery, Nagoya City University Hospital between 2005 and 2012. The lung tumors were classified according to the General Rule for Clinical and Pathological Record of Lung Cancer (7th edition) in Japan. All tumor samples were immediately frozen and stored at −80°C until assayed.

PCR analysis of the NRF2 gene

Total RNA was extracted from lung cancer tissues using the Isogen kit (Nippon Gene, Tokyo, Japan) according to the manufacturer’s instructions. The RNA concentration was determined by a spectrophotometer and adjusted to a concentration of 200 ng/ml. Approximately 10 cases were excluded for each assay since tumor cells were too few to sufficiently extract tumor RNA. RNA (1 μg) was reverse transcribed by SuperScript II enzyme (Gibco-BRL, Gaithersburg, MD, USA) with 0.5 μg oligo(dT)12–16 (Amersham Pharmacia Biotech Inc., Piscataway, NJ, USA). The reaction mixture was incubated at 42°C for 50 min and then at 72°C for 15 min. We then used 1 μl of each DNA for PCR analyses. Initially, 281 (between 1997–2006) samples were sequenced as reported in our previous study (16). These sets of RNA were used as a positive and negative control for genotyping.

Statistical analyses were performed using the Mann-Whitney U-test for unpaired samples and Wilcoxon’s signed rank test for paired samples. Linear relationships between variables were determined by means of simple linear regression. Correlation coefficients were determined by rank correlation using Spearman’s test and χ2 test. The overall survival of lung cancer patients was examined by the Kaplan-Meier methods, and differences were examined by the log-rank test. All analysies were conducted using the StatView software package (Abacus Concepts Inc., Berkeley, CA, USA), and a P-value <0.05 was considered to indicate a statistically significant result.

Our findings revealed that the NRF2 gene mutation status was correlated with squamous histology and smoking status. This was in agreement with previous studies (17,24). Previous studies have documented that genetic alterations in lung cancer are frequent in smokers, such as mutations of the TP53 and Kras genes (25). The cause of these somatic mutations in cancer cells is shaped by multiple factors, such as exposure to mutagens, selective pressures in the tissue microenvironment and genomic stability (26), while tobacco smoking results in deposits of many hundreds of chemicals in the airways and lung.

Continuous chronic exposure of tissues of the respiratory tract to cigarette smoke generally activates cellular defense systems and the deposits trigger a pleiotropic adaptive response, aimed at restoring tissue homeostasis. A previous study suggests that a hallmark of this defense system is the activation of the transcription factor NRF2, consequent to its established role as master regulator of the cellular antioxidant response (27). NRF2 regulates the expression of several genes encoding antioxidant and detoxification proteins (9). In addition, constitutive expression in a tumorigenic situation could provide a survival advantage to invasive and metastatic cancer cells. A previous study found that the RNAi-mediated silencing of NRF2 gene expression in lung cancer inhibited tumor growth (14). NRF2 gene promoter polymorphism was identified and was suggested to correlate with carcinogenesis (15). The adaptation to the microenvironment and the development of chemoresistance in cancer cells are also known to occur in tumors under hypoxia (28,29). These influence a worse prognosis in NRF2 mutant patients. The expression of multidrug resistance-associated proteins (MRPs), drug efflux proteins, was also found to be significantly reduced in NRF2 gene-silenced A549 cells (30). A recent report showed that MRP3 gene expression was correlated with NRF2 gene mutations in lung SqCC (31). Oxidative stress-regulated lentiviral gene therapy may overcome the resistance of lung cancer to treatment (32).

Real-time PCR assay allows for easy identification of new mutations and provides the best means for pre-therapeutic genotyping in a clinical setting at present. Therefore, we developed two different PCRs to detect NRF2 gene mutations. The rapid PCR method and elimination of additional steps to analyze PCR products saves time. Handling is facilitated and potentially toxic reagents, such as ethidium bromide stain, are avoided. Using the LightCycler reverse transcription-PCR assay described here, determination of the NRF2 gene mutation status may be of clinical importance in predicting the prognosis or determining additional therapy for lung cancer patients. Using this method, 32 samples were genotyped within 1 h without the need of any post-PCR sample manipulation.

The authors would like to thank Mrs. Yuka Toda for her excellent technical assistances. This study was supported by Grants-in-Aid for Scientific Research, Japan Society for the Promotion of Science (JSPS) (nos. 24692097, 23659674 and 21591820). 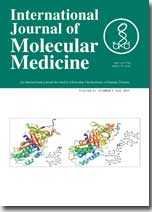