Previous studies have reported that long non‑coding (lnc) RNA FGD5‑antisense 1 (FGD5‑AS1) promotes tumor proliferation, migration and invasion. Therefore, the present study aimed to elucidate the biological role and underlying molecular mechanisms of FGD5‑AS1 in cisplatin (DDP) resistance of lung adenocarcinoma (LAD) cells. The results demonstrated that FGD5‑AS1 was highly expressed in DDP‑resistant LAD tissues and cells. Knockdown of FGD5‑AS1 decreased the proliferative, migratory and invasive abilities of DDP‑resistant LAD cells. Moreover, it was identified that FGD5‑AS1 acted as a molecular sponge for microRNA (miR)‑142, and FGD5‑AS1 enhanced the resistance of A549/DDP cells to DDP by directly interacting with miR‑142. Programmed cell death 1 ligand 1 (PD‑L1) was also found to be a key effector of the FGD5‑AS1/miR‑142 axis to regulate the chemoresistance of DDP‑resistant LAD cells. In conclusion, the present study demonstrated that FGD5‑AS1 increased DDP resistance of LAD via the miR‑142/PD‑L1 axis, which may offer a novel treatment strategy for patients with DDP‑resistant LAD.

Lung cancer is one of the most common malignant tumor types worldwide, and non-small cell lung cancer (NSCLC) accounts for ~80% of all lung cancer types (1). NSCLC includes adenocarcinoma and squamous cell carcinoma, among which lung adenocarcinoma (LAD) is the most common pathological type (2). In addition to surgical treatment, chemotherapy is an effective method to improve the survival rate of patients with LAD (3). However, chemotherapeutic resistance is a major barrier to chemotherapy failure. For instance, drug-resistant tumor cells continue to metastasize to the distal end, can proliferate quickly and have a strong invasive ability. Therefore, it is important to understand the molecular mechanism of cisplatin (DDP) resistance in LAD and to identify novel targets to prevent the occurrence of DDP resistance.

Previous studies have reported that long non-coding RNA (lncRNA) could be involved in the development of tumors. For instance, Yang et al (4) revealed that lncRNA MIR4435-2HG was upregulated and promoted the tumorigenesis of NSCLC, while Zhao et al (5) observed that GMDS-AS1 inhibited the proliferation of LAD cells and enhanced cell apoptosis. Moreover, the underlying mechanism of lncRNAs in multiple tumor chemoresistance is a hot topic of research. It has been demonstrated that some lncRNAs promote DDP-resistance in multiple cancer types. For example, Hu et al (6) discovered that colon cancer associated transcript 1 (CCAT1) enhanced DDP resistance in esophageal cancer via the microRNA (miRNA/miR)-142/PLK1/BUBR axis. Furthermore, Yan et al (7) reported that nuclear enriched abundant transcription 1 decreased the sensitivity of anaplastic thyroid carcinoma cells to DDP via the miR-9/c-Jun-amino-terminal kinase-inter-acting protein 4 axis. Therefore, understanding the molecular mechanism of lncRNA in DDP-resistant LAD could help identify novel therapeutic targets. lncRNA FGD5-antisense 1 (FGD5-AS1) is considered as a potential target in the treatment of various types of cancer, including colorectal cancer, periodontitis and kidney carcinoma (8-10). However, the role of FGD5-AS1 in DDP-resistant LAD remains unknown.

miRNAs have biological characteristics and targeted specificity, and have the potential to be a marker for tumor treatment and prognosis (11,12). Liang et al (13) revealed that miR-485-5p suppressed papillary thyroid cancer development by modulating Raf1. Moreover, Fan et al (14) suggested that miR-1281 expression was significantly downregulated in breast cancer tissues, which was associated with the pathological stage and poor prognosis of patients with breast cancer. These characteristics of miRNA provide novel strategies for the treatment of various malignant tumors.

The present study aimed to elucidate the biological role and underlying molecular mechanisms of FGD5-AS1 in DDP-resistant LAD cells. It was demonstrated that FGD5-AS1 enhanced the resistance of LAD cells to DDP via the miR-142/programmed cell death 1 ligand 1 (PD-L1) axis, and thus may provide potential therapeutic strategies for LAD treatment.

A total of 46 LAD tissues, including 25 DDP-resistant LAD tissues and 21 DDP-sensitive LAD tissues, were obtained from 46 patients with LAD with a mean age of 47 years (age range, 33-64 years; 31 male patients and 15 female patients) between April 2015 and August 2017 at The Third Affiliated Hospital of Soochow University (Changzhou, China). All patients agreed to cooperate with the present research and provided signed informed consent. The research was approved by the Ethics Committee of The Third Affiliated Hospital of Soochow University. Fresh tissues were immediately frozen in liquid nitrogen and stored at -80°C.

Human LAD cell lines (A549 and HCC827) were purchased from the American Type Culture Collection. All cell lines were cultured in RPMI0-1640 medium (Gibco; Thermo Fisher Scientific, Inc.) and supplemented with 10% FBS (Thermo Fisher Scientific, Inc.), 100 U/ml penicillin and 100 U/ml streptomycin at 37°C in a humidified chamber with 5% CO2. To establish DDP-resistant LAD cells (A549/DDP and HCC827/DDP), A549 and HCC827 cells were incubated at room temperature with increasing concentrations of DDP (0.5-10 µg/ml; Sigma Aldrich; Merck KGaA) for >6 months.

To determine the IC50 value, the cells (1×104 cells/well) were seeded into 96-well plates at 37°C and 5% CO2. The cells were treated with (0, 2, 4, 6, 8 and 10 µg/ml) DDP for 48 h in the medium with 10% FBS. For the detection of cell viability, the transfected A549/DDP and HCC827/DDP cells were treated with 4 µg/ml DDP for 48 h. Then, cells were incubated with 10 µl CCK-8 reagent (Beyotime Institute of Biotechnology) for another 2 h. The absorbance at 450 nm wavelength was observed on a micro-plate reader (Thermo Fisher Scientific, Inc.). The IC50 value was calculated using the relative survival curve.

The migratory and invasive abilities were assessed using Transwell chambers (8.0 µm pore size; EMD Millipore) and Matrigel (Corning, Inc.). For the migration assay, transfected cells (1×105) were placed in the upper chamber containing 200 µl RPMI-1640 medium, and 600 µl RPMI-1640 medium containing 10% FBS was added in the lower chamber. The cells were cultured for 48 h, and the cells in the lower chamber were fixed with methanol and stained with crystal violet (Sigma-Aldrich; Merck KGaA) both for 20 min at room temperature. For the invasion assay, the insert membranes were coated with Matrigel for 1 h at room temperature and then cultured under the same conditions as aforementioned. Migrated and invaded cells were counted under a light microscope (magnification, ×200) and imaged.

StarBase version 2.0 (http://star-base.sysu.edu.cn) was used to predict the binding sites between FGD5-AS1 and miR-142, and TargetScan 7.2 (http://www.targetscan.org) was used to predict the binding sites between miR-142 and 3′-untranslated region (UTR) of PD-L1. A luciferase reporter assay was performed to verify the binding ability between RNAs. The wild-type (WT) and mutant-type (Mut) of the FGD5-AS1 sequences (or PD-L1 3′-UTR) were cloned into firefly luciferase gene reporter vectors pmirGLO (Promega Corporation). These constructed vectors were co-transfected with NC mimics or miR-142 mimics into LAD cells using Lipofectamine® 2000 (Invitrogen; Thermo Fisher Scientific, Inc.). After 48 h, the relative luciferase activity was determined using the Dual-Luciferase® Reporter Assay System (Promega Corporation) according to the manufacturer's instructions. Firefly luciferase activity was normalized to Renilla luciferase (Promega Corporation) gene activity.

SPSS 22.0 (IBM Corp.) was used for statistical analysis and each experiment was repeated ≥3 times. Comparisons of parameters between two groups were analyzed using a paired Student's t-test. Comparisons among multiple groups were performed using one-way ANOVA followed by Tukey's test. Pearson's correlation analysis was used for analyzing the correlation between FGD5-AS1 and miR-142. P<0.05 was considered to indicate a statistically significant difference.

lncRNAs have been reported to promote cancer progression by acting as competing endogenous RNA (ceRNA). Using StarBase, miR-142 was predicted as a candidate target of FGD5-AS1 (Fig. 3A). RT-qPCR showed that miR-142 expression was significantly increased in A549 and HCC827 cells transfected with miR-142 mimics (Fig. 3B). Subsequently, the luciferase reporter assay results identified that overexpression of miR-142 significantly weakened the luciferase activity of the FGD5-AS1-WT group, while it had no effect on the FGD5-AS1-Mut reporter group (Fig. 3C). The RIP assay revealed that miR-142 and FGD5-AS1 were significantly enriched with the anti-ago2 antibody compared with anti-IgG, which further indicated that FGD5-AS1 may be associated with miR-142 (Fig. 3D).

PD-L1 is directly targeted by miR-142

TargetScan analysis was performed and it was found that miR-142 possessed a binding site for PD-L1 (Fig. 5A). miR-142 mimics significantly suppressed the relative luciferase activity of the PD-L1-WT group, but had no effect on the PD-L1-Mut group (Fig. 5B). In addition, RT-qPCR results identified that PD-L1 expression was significantly increased in DDP-resistant LAD tissues (Fig. 5C). RT-qPCR and western blot assays also revealed that the mRNA and protein expression levels of PD-L1 were significantly increased in A549/DDP and HCC827/DDP cells (Fig. 5D and E). It was found that miR-142 mimics decreased PD-L1 expression, whereas transfection with the miR-142 inhibitor increased PD-L1 expression (Fig. 5F and G). Thus, miR-142 may exert its biological function via PD-L1.

LAD is a malignant tumor type that is a threat to human health worldwide (16). In addition to surgical treatment, DDP-based chemotherapy is the primary therapeutic strategy for LAD cancer therapy. As a result of DDP resistance in tumor cells, chemotherapy suffers from the bottleneck phenomenon, whereby tumor cell populations decrease for a brief period of time but then quickly repopulate. It was previously reported that lncRNA serves a vital regulatory role in the chemo-resistance of various cancer types (17). The present study demonstrated that lncRNA FGD5-AS1 was highly expressed in DDP-resistant LAD cells compared with parental cells, and FGD5-AS1 knockdown decreased the DDP resistance of A549/DDP and HCC827/DDP cells.

miR-142 has been identified to exert an inhibitory effect in several cancer types, including squamous cell carcinoma, gastric cancer and ovarian cancer (23-25). In addition, it has been demonstrated that miR-142 inhibits chemoresistance of various tumors, such as ovarian cancer and osteosarcoma (26,27). The present results suggested that miR-142 was downregulated in LAD, and the overexpression of miR-142 contributed to chemosensitivity in DDP-resistant LAD cells.

PD-L1 may promote tumor cell proliferation and differentiation by creating an imbalance between immune cells and the cellular environment (28,29). PD-L1 is also reported to be involved in the regulation of tumor development. For example, PD-L1 is upregulated in human osteosarcoma tissues and increases cell invasion (30). Moreover, high expression of PD-L1 affects the survival and prognosis of patients with ovarian cancer (31). Zuo et al (32) reported that PD-L1 silencing suppressed chemoresistance of DDP-resistant ovarian cancer cells to DDP, as evidenced by inhibited proliferation, G1-phase cell cycle arrest and promotion of apoptosis. To the best of our knowledge, the present study provided the first evidence that PD-L1 could directly interact with miR-142 via a specific binding site, and that PD-L1 knockdown suppressed tumor progression and enhanced chemosensitivity of DDP-resistant LAD cells.

However, some limitations remain to be addressed in future studies. Other miRNAs or downstream effectors that are crucial to FGD5-AS1-regulated DDP resistance of LAD cells need to be identified in the future. In addition, the expression of FGD5-AS1 was detected using limited sample sizes. Therefore, further studies are required to confirm the expression of FGD5-AS1 in a large sample size and to further assess the clinical significance.

In conclusion, the present results suggested that the FGD5-AS1/miR-142/PD-L1 axis contributed to DDP resistance in LAD. These findings provided a novel insight into the issue of DDP resistance.

This study was funded by the Scientific Research Project of Wuxi Municipal Health Commission (grant no. M202009).

The research was approved by the Ethics Committee of The Third Affiliated Hospital of Soochow University (Changzhou, China) and all patients provided signed informed consent. 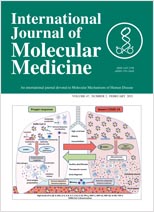