Subsequently to the publication of the above article, and a Corrigendum that was published with the intention of rectifying the issue of overlapping data panels showing cell migration and invasion assay data in Fig. 8 (DOI: 10.3892/mmr.2018.9415; published online on September 24, 2017), it was drawn to the Editors' attention by a concerned reader that certain of the data shown for the epithelial‑mesenchymal transition experiments in Fig. 2B, western blotting data in Fig. 6 and scratch‑wound assay data shown in Fig. 7A were strikingly similar to data appearing in different form in other articles by different authors at different research institutes, which had already been published elsewhere prior to this paper's submission to International Journal of Molecular Medicine. In addition, several other instances of overlapping data panels were identified in Fig. 8.
Owing to the fact that a substantial number of contentious data included in this paper had already been published elsewhere prior to its submission to International Journal of Molecular Medicine, the Editor has decided that this paper should be retracted from the Journal. The authors were asked for an explanation to account for these concerns, but the Editorial Office did not receive a reply. The Editor apologizes to the readership for any inconvenience caused. [International Journal of Molecular Medicine 40: 1114‑1124, 2017; DOI: 10.3892/ijmm.2017.3118] 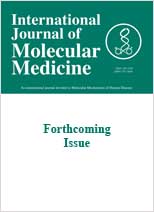