The appearance of DNA strand breaks during apoptosis was detected in individual cells, in relation to the cell cycle phase, by a novel assay based on labeling 3'-OH termini with biotinylated dUTP using exogenous terminal transferase or DNA polymerase. Apoptosis was induced in HL-60 cells by the DNA topoisomerase I and II inhibitors, and in rat thymocytes by prednisolone. Formation of strand breaks was prevented by the serine protease irreversible inhibitors diisopropyl fluorophosphate (DFP), L-1-tosylamido-2-phenylethyl chloromethyl ketone (TPCK), N-p-tosyl-L-lysine chloromethyl ketone (TLCK) and by the substrates N-alpha-tosyl-L-arginine methyl ester (TAME) and N-benzoyl-L-tyrosine ethyl ester (BTEE). The data indicate that initiation of DNA degradation during apoptosis is preceded by a proteolytic step and suggest that apoptosis starts with activation (e.g. by DNA lesions) of a serine protease which hydrolyses protein(s) associated with the internucleosomal linker DNA sections, thus increasing accessibility of linker DNA to the apoptosis-associated endonuclease. 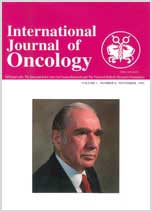