In the preceding report we demonstrated that MCF-7-AdrR cells (adriamycin resistant) were insensitive to ceramide, whereas MCF-7 wild-type cells were sensitive. It was also shown that the drug resistant cells had an increased capacity to convert ceramide to glucosylceramide. Here we demonstrate that blocking the conversion of ceramide to glucosylceramide increases MCF-7-AdrR cell sensitivity to ceramide as well as to antitumor agents. Treatment of MCF-7 cells with adriamycin elicited a 5-fold increase in ceramide, and caused oligonucleosomal fragmentation, characteristic to apoptosis. Under similar treatment conditions, ceramide was not generated in MCF-7-AdrR cells. In MCF-7-AdrR cells neither C6-ceramide nor tamoxifen was cytotoxic; however, the addition of tamoxifen to the C6-ceramide treatment regimen reduced cell viability to 42% and elicited apoptosis. Treatment of MCF-7-AdrR cells with Adriamycin promoted an increase in ceramide only if tamoxifen was present, in which case ceramide increased 7-fold, and cell viability decreased to 50%. The employment of another agent, RU486 (Mifepristone), which blocks ceramide glycosylation, increased MCF-7-AdrR cell sensitivity to adriamycin in a dose-dependent manner. Our data show that agents that block ceramide glycosylation potentiate cellular sensitivity to ceramide and to chemotherapeutic drugs, and suggest that the ceramide metabolic pathway is an important target for anticancer drug development. 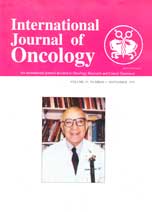