Lack of defective expression of the ATM gene in sporadic breast cancer tissues and cell lines.

Homozygous mutations of the gene mutated in ataxia telangiectasia (ATM) causes the AT syndrome, a pleiotropic phenotype that includes an increased risk of cancer. Most of the known mutations at the ATM gene lead to truncations which are usually associated with instability of mRNA and protein. A decrease or loss of ATM protein expression is associated with specific lymphoid malignancies in AT and non-AT patients. ATM is located within a region in chromosome 11q22-23 that is frequently undergoing loss of heterozygosity in sporadic breast cancer. Epidemiological studies estimated a 4-fold increase in breast cancer risk in heterozygous women. However, direct mutational analysis failed to clearly support a role for mutant ATM alleles in breast carcinogenesis. If ATM does have a suppressor role in this tissue, one would expect deficient ATM expression. We therefore tested the hypothesis that the expression of the ATM gene is reduced in sporadic breast cancer. We determined ATM transcript levels using competitive RT-PCR on 89 randomly selected sporadic breast cancer samples and 29 normal breast tissues. Of these, 11 were matched normal/cancer pairs. We also evaluated 7 breast cancer cell lines. Deficiency in ATM expression was not observed. Of the 11 matched pairs, 7 tumors expressed mildly higher levels, 3 tumors expressed the same amount and only 1 tumor expressed <50% of the normal match. In addition, 3 cancers with tumor-associated LOH of the ATM gene expressed higher mRNA levels in the tumors than in their normal tissue matches, suggesting that no correlation exists between tumors with LOH and decreased ATM expression. In summary, our results do not support a suppressor role for ATM in the development of sporadic breast cancer. 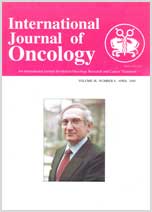