We examined the possibility that the localization of phosphorylated ERK1 and ERK2 (pERK1/2) can serve as a marker for the development of benign and borderline tumors as well as carcinoma of the ovary by an immunohistochemical method on ovarian paraffin sections, obtained from women aged 41-83 years. In normal tissue, 28.3% of nuclei were labeled, mainly confined to the epithelial cells at the surface of the ovary. In benign serous tumors, the label rose to 55.0%, while the intensity of the staining was weak. In contrast, in borderline serous tumors and in ovarian serous carcinoma (stage II) 52.1% and 70.3% of nuclei, respectively, were labeled with a high intensity. In mucinous benign tumors, the number of labeled nuclei was as in the control, but in addition, 49.4% of the cells demonstrated high concentration of pERK1/2 in aggregated form that was evident in the cytoplasm of the cells. In the mucinous and endometrioid ovarian carcinomas (stage II) very intensive labeling was found in 60% and 77.3% of cells, respectively. It is, therefore, suggested that since nuclear pERK1/2 can be mitogenic, it can serve as a reliable marker for the progression of ovarian cancer. Interestingly, the intense labeling of pERK1/2 was mainly confined to the peripheral areas of ovarian endometrioid carcinoma (stage II). In addition, all tumor cells in this class of cancer were positively stained with mutated p53. It seems, therefore, that immunohistochemical staining of normal and ovarian tumor cells with anti-pERK1/2 is a reliable marker for early detection of the cancer, which may assist in the early diagnosis and prognosis of this lethal disease. 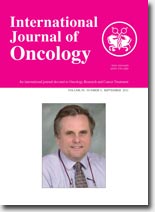