Carnosol, an active constituent of rosemary, has been reported to possess anti-inflammatory and anticancer activities. However, the molecular mechanisms underlying the anticancer effects of carnosol remain poorly understood. In the present study, we found that carnosol significantly reduced the viability of human colon cancer (HCT116) cells in a concentration- and time-dependent manner. Treatment of cells with carnosol induced apoptosis, which was associated with activation of caspase-9 and -3 and the cleavage of poly-(ADP-ribose) polymerase (PARP). Incubation with carnosol elevated the expression of Bax and inhibited the levels of Bcl-2 and Bcl-xl. Carnosol induced expression of p53 and inhibited that of murine-double minute-2 (Mdm2). Moreover, carnosol generated reactive oxygen species (ROS), and pretreatment with N-acetyl cysteine abrogated carnosol-induced cleavage of caspase-3 and PARP. The constitutive phosphorylation, the DNA binding and reporter gene activity of signal transducer and activator of transcription-3 (STAT3) was diminished by treatment with carnosol. To further elucidate the molecular mechanisms of STAT3 inactivation, we found that carnosol attenuated the phosphorylation of Janus-activated kinase-2 (Jak2) and Src kinase. Pharmacological inhibition of Jak2 and Src inhibited STAT3 phosphorylation. Furthermore, carnosol attenuated the expression of STAT3 target gene products, such as survivin, cyclin-D1, -D2, and -D3. Taken together, our study provides the first report that carnosol induced apoptosis in HCT116 cells via generation of ROS, induction of p53, activation of caspases and inhibition of STAT3 signaling pathway.

Despite a declining trend worldwide, colorectal cancer still remains as the third most common cancer among men and the second in women (1,2). More than one million new cases of colorectal cancer are diagnosed every year (3). A wide variety of natural compounds derived from edible plants have been shown to prevent colon carcinogenesis (4). Carnosol, a diterpene present in rosemary (Rosmarinus officinalis), has been reported to prevent the development of intestinal tumors in APC (adenomatous polyposis coli)min+/+ mice (5) and to induce apoptosis in human colon cancer (COLO 205) cells (6). However, the molecular mechanisms underlying the chemopreventive and/or chemotherapeutic effects of carnosol in colon cancer are yet to be fully elucidated. We, therefore, attempted to investigate the effects of carnosol on human colon cancer (HCT116) cells and to elucidate its underlying mechanisms.

One of the hallmarks of cancer is the evasion of tumor cells from apoptosis (7). Numerous naturally occurring polyphenols inhibit proliferation and induce apoptosis in various cancer cells (8). Apoptosis is induced by two cellular mechanisms: intrinsic (mitochondria-dependent) and extrinsic (death receptor-mediated) signaling (9). The intrinsic pathway of apoptosis involves the depolarization of mitochondrial membrane, release of cytochrome c, sequential activation of caspase-9, -7 and -3, and the cleavage of poly-(ADP-ribose) polymerase (PARP). The extrinsic pathway, on the other hand, is mediated through the activation of cell membrane-bound death receptors, followed by the activation of pro-caspase-8, which then execute cell death by triggering the activity of caspase-3 (9,10).

Cancer cells are characterized by constitutively elevated expression of a variety of anti-apoptotic proteins and the diminished expression of pro-apoptotic proteins (11). The balance between the expression of pro- versus anti-apoptotic proteins determines the cell fate. Signal transducer and activator of transcription-3 (STAT3) is a transcription factor that transactivates the genes encoding various cell survival proteins, such as cyclins, survivin, Bcl-2 and Bcl-xl (12,13). STAT3 is consitutively active in cancer cells, and the aberrant activation of STAT3-mediated signaling have been implicated in colon carcinogenesis (14–16). In response to diverse growth stimulatory signals, STAT3 gets activated through phosphorylation by upstream kinases, such as janus-activated kinase-2 (Jak2) (16) and Src tyrosine kinase (17) followed by STAT3 dimerization and nuclear localization. The blockade of STAT3 activation inhibits cell proliferation and induces apoptosis. Thus, STAT3 is a prime target of many anticancer agents (12). Herein we report, for the first time, that carnosol induces apoptosis in HCT116 cells through inactivation of STAT3 signaling pathway.

HCT116 cells were obtained from American Type Culture Collections and maintained in Dulbecco’s modified Eagle’s medium (DMEM) supplemented with 10% fetal bovine serum and antibiotics (100 U/ml penicillin G and 100 μg/ml streptomycin) at 37°C in a humidified incubator containing 5% CO2 and 95% air. In all the experiments, cells were seeded at 2×105 cells/ml and incubated with carnosol at 50–60% confluence. All chemicals were dissolved in ethanol and the final ethanol concentration was <1%.

The anti-proliferative effect of carnosol against HCT116 cells was measured by using a solution of tetrazolium compound [3-(4,5-dimethylthiazol-2-yl)-5-(3-carboxymethoxyphenyl)-2-(4-sulfophenyl)-2H-tetrazolium, inner salt (MTS) (Promega, WI, USA). Briefly, cells (2×103) were incubated in triplicate in a 96-well plate in presence or absence of carnosol in a final volume of 0.1 ml for different time intervals at 37°C. Thereafter, 20 μl of MTS solution was added to each well and incubated for 60 min. The number of viable cells was measured in a 96-well plate at an optical density of 492 nm on a microplate reader (Tecan Trading AG, Männedorf, Switzerland). Cell viability is described as the relative percentage of control.

Cells were seeded into 12-well plates at a density of 5×104 cells per well prior to transfection. Cells were transfected with p-STAT3-TA-luc (Clontech, CA, USA) or control vector using Genefectin transfection reagent (Genetrone Biotech, Korea). After 24 h of trans fection, cells were treated with carnosol for additional 24 h and cell lysis was carried out with 1X reporter lysis buffer. After mixing the cell lysates with luciferase substrate (Promega), the luciferase activity was measured by a luminometer. The β-galactosidase assay was performed according to the supplier’s instructions (Promega Enzyme Assay System) for normalizing the luciferase activity and the results are expressed as fold transactivation.

Preparation of cytosolic and nuclear extracts

The cytosolic and nuclear extracts were prepared by using NE-PER Nuclear and Cytoplasmic Extraction Reagent kit (Thermo Scientific). Cells were washed with ice cold PBS, collected and centrifuged at 1,600 × g for 15 min at 4°C. Pellets were suspended in 50 μl of Cytoplasmic Extraction Reagent (CER)-I for 15 min, then CERII was added for 2 min. The mixture was centrifuged for 10 min at 16,000 × g. Supernatant was collected as cytosolic extract. The pellets were washed with Nuclear Extraction Reagent and incubated on ice for 1 h and centrifuged at 16,000 × g for 15 min. The supernatant containing nuclear proteins was collected and stored at −70°C after determination of protein concentration by using Bradford Reagent (Bio-Rad Laboratories, Hercules, CA, USA).

The EMSA for STAT3 DNA binding was performed using a DNA-protein binding detection kit, according to the manufacturer’s protocol (Gibco BRL, Grand Island, NY, USA). The nuclear extract was prepared from cells incubated with or without carnosol. The STAT3 oligonucleotide probe 5′-AGC TTC ATT TCC CGT AAA TCC CTA-3′ (Bioneer, Korea) was labeled with [γ-32P]-ATP and the EMSA was performed according to the protocol described earlier (19).

Measurement of the accumulation of reactive oxygen species (ROS)

Cells were treated with carnosol in the presence or absence of NAC for 24 h and then loaded with 25 μM of DCF-DA. After incubation for 30 min at 37°C in a 5% CO2 incubator, cells were washed twice with HBSS solution, suspended in the complete media and were examined under a fluorescence microscope to detect the intracellular accumulation of ROS.

When necessary, data were expressed as mean ± SD of at least three independent experiments, and statistical analysis for single comparison was performed using the Student’s t-test and a p-value <0.05 was considered as statistically significant.

We initially examined the effect of carnosol on the viability of HCT116 cells. Incubation of cells with carnosol (5, 20, 50 or 100 μM) reduced the cell viability in a time- and concentration-dependent manner (Fig. 1B). Analysis of cell morphology showed that carnosol treatment induced apoptotic cell death (Fig. 1C), which was further verified by Annexin V and P.I. staining of cells treated with indicated concentrations of carnosol. As shown in Fig. 1D, carnosol induced apoptosis in a concentration-dependent manner.

Carnosol-induced apoptosis is mediated through caspase activation, p53 induction and the modulation of Bcl-2/Bax expression

Involvement of ROS in carnosol-induced apoptosis in HCT116 cells

Carnosol, a diterpene present in the culinary herb rosemary, has been reported to exert anticancer activities (20). However, the biochemical basis of anticancer effects of carnosol remains elusive. In the present study, we found that carnosol induced apoptosis in HCT116 cells in a time- and concentration-dependent manner. This effect of carnosol is in good agreement with the apoptosis induction by this compound in other cancer cells (21,22), including that in COLO 205 colon cancer cells (6). Then we attempted to delineate the molecular mechanisms of anticancer effects of carnosol. The cleavage of pro-caspase-9 by carnosol resulted in the activation of effector caspase-3 and the cleavage of PARP. Since caspase-9 is an initiator caspase in mitochondria-mediated death signaling (9), these findings suggest that carnosol may induce apoptosis through the intrinsic pathway.

Cells are equipped with a series of anti-apoptotic (e.g., Bcl-2, Bcl-xl) and apoptosis-inducing proteins (e.g., Bax, p53). Overexpression of Bcl-2 or Bcl-xl inhibits apoptosis and promotes survival of cells (23). According to Zhu et al, the induction of Bax is essential for death receptor-mediated apoptosis in human colon cancer cells (24). On the other hand, the pro-survival protein Bcl-2 is overexpressed in colon cancer (25) and the Bcl-2-mediated inhibition of apoptosis restores the tumorigenecity of spontaneously regressed colon tumors in vivo (26). The inhibition of Bcl-2 and Bcl-xl expression and the increase in Bax protein level, thus, provide a mechanistic basis of apoptosis induction by carnosol.

p53, an apoptosis-inducing protein (27), undergoes proteasomal degradation by its cytosolic repressor Mdm2 (28). Pharmacological inhibition of Mdm2 activates p53 and induces growth arrest in mouse colon tumor and human colon cancer cells (29). The inhibition of Mdm2 expression and concomitant increase in p53 expression by carnosol, thus, suggest that carnosol may induce apoptosis by inducing p53 expression. While the pro-apoptotic Bax gene is a direct target of p53 (30), the overexpression of p53 in p53-null cells diminish Bcl-2 expression (31). Thus, carnosol-induced p53 activation may result in cell death through downregulation of Bcl-2 and upregulation of Bax. Since the induction of p53 occurs in response to oxidative stress (32), we examined if carnosol generates ROS in HCT116 cells. We found that carnosol induced ROS generation, which was diminished by ROS scavenger NAC. Moreover, pretreatment of cells with NAC attenuated carnosol-induced cleavage of caspase-3 and PARP. Thus, carnosol-induced ROS generation may activate p53, resulting in the downregulation of Bcl-2 and induction of Bax expression, thereby leading to the activation of caspases and induction of apoptosis.

Apart from the regulation by p53, the expression of anti-apoptotic proteins Bcl-2 and Bcl-xl is also regulated by STAT3 (13), which is overexpressed in colon cancer (12). Persistent STAT3 activation increases the proliferation of colon cancer cells in culture and enhances the growth of colon cancer cell xenograft tumors in nude mice (33). Moreover, the inhibition of STAT3 signaling induces apoptosis and cell cycle arrest in colon carcinoma cells (34). Therefore, we examined the effect of carnosol on STAT3 signaling in HCT116 cells. STAT3 activation mechanism involves the phosphorylation of its tyrosine 705 residue followed by the formation of STAT3 dimer, which translocates to the nucleus and interacts with the promoter region of target genes (12). Several upstream kinases including Jak2 (16) and Src (17) have been reported to phosphorylate STAT3 at tyrosine705 residue. The decreased phosphorylation of STAT3, Jak2 and Src kinase by carnosol suggests that the apoptosis induction by this compound is mediated through inhibition of STAT3 signaling. This was further supported by the findings that carnosol diminished STAT3 DNA binding and STAT3-reporter gene activity, thereby reducing the expression of D-series cyclins and survivin, which are STAT3 target gene products (13,35). While, survivin inhibits Fas-mediated apoptosis in cancer cells (36), cyclins promote cell proliferation (15). Thus, the reduced expression of survivin and D-series cyclins by carnosol is associated with the induction of apoptosis by this compound.

In conclusion, our study demonstrates for the first time that carnosol-induced generation of ROS, activation of caspases, induction of p53 and the inhibition of STAT3 signaling lead to the induction of apoptosis in HCT116 cells, which may provide a mechanistic basis of the anticancer activity of the compound.

This study was supported by the College of Pharmacy-specialized Research Fund (the Institute for New Drug Development) of Keimyung University in 2013. 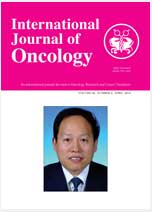