The bone is the most common metastatic site of breast cancer. Bone metastasis causes pain, pathologic fractures, and severely reduces the quality of life. Breast cancer causes osteolytic bone metastasis, which is dependent on osteoclast-mediated bone resorption. While current treatments rely on palliative anti-resorptive agents, there is a need to develop a drug based on potential alternative therapies. This study is the first to determine that wedelolactone (WDL), a natural coumarin isolated from plants, can inhibit breast cancer-mediated osteoclastogenesis. Osteoclasts were generated from human CD14+ monocytes cultured with M-CSF/RANKL and WDL suppressed human osteoclast differentiation and activity in vitro in a dose-dependent manner. Moreover, WDL inhibited the upregulation of osteoclasts stimulated by MDA‑MB‑231 breast cancer cells. The activity of WDL on osteoclasts and breast cancer-mediated osteoclastogenesis was associated with the inhibition of Akt/mammalian target of the rapamycin signaling pathway (mTOR). Blocking Akt and mTOR by specific inhibitors significantly decreased osteoclast differentiation and bone resorption. Furthermore, WDL regulated breast cancer-enhanced interaction of osteoblasts and osteoclasts by decreasing M-CSF expression in MDA‑MB‑231-stimulated osteoblasts. Thus, this study suggests that WDL may be a potential natural agent for preventing and treating bone destruction in patients with bone metastasis due to breast cancer.

Breast cancer is the most common female cancer in the world and bone metastasis occurs in up to 70–80% of patients with advanced breast cancer (1,2). Bone metastasis of breast cancer typically leads to osteolysis and results in bone destruction and skeletal-related events, including severe bone pain, pathologic fractures, spinal cord and nerve compression syndromes, and life-threatening hypercalcemia, which are a common cause of morbidity and mortality (3). Current treatments for bone metastasis have limited efficacy and are only palliative (4). Side-effects like renal toxicity and osteonecrosis of the jaw are considered clinically significant, potentially painful, and debilitating enough to decrease life quality of breast cancer patients (2,5,6). Thus, it is important that therapeutic strategies are developed for the prevention and treatment of bone metastasis in breast cancer.

The spread of breast cancer to the bone begins with the initiation of bone demolition, the entry of malignant cells in the bone marrow, and subsequently, an increase in osteolysis (7). Bone metastasis is characterized by the complicated interaction between cancer cells and bone micro-environment (i.e., osteoclasts, osteoblasts and stroma cells) (7). Osteolytic bone metastasis is driven by the ‘vicious cycle’ of cancer-mediated upregulation of osteoclasts and bone stroma-induced cancer progression (8). Osteoclasts are large, multi-nucleated cells derived from hematopoietic precursor cells of the monocyte/ macrophage lineage (9). Their differentiation is mediated by two cytokines, including macrophage colony stimulating factor (M-CSF) and receptor activator of nuclear factor κB ligand (RANKL) (10). RANKL is crucial for osteoclast function by binding to its receptor RANK, while M-CSF maintains the proliferation and survival of osteoclasts, and upregulates RANK receptor expression in osteoclast precursor cells (11).

Wedelolactone (7-methoxy-5,11,12-trihydroxy-coumestan, Fig. 1A) (Sigma-Aldrich, St. Louis, MO, USA) is a natural coumarin isolated from Wedelia chinensis and Eclipta prostrata, which are traditionally used for hair and skin health and for preventing liver damage due to alcohol overdose (16–19). Previous studies show that WDL has diverse pharmacologic effects such as anti-hepatotoxic, anti-androgenic, and anti-human immunodeficiency activities (19–21). Recent research has highlighted the antitumor effects of WDL. Combinations of active compounds in W. chinensis, including WDL, apigenin, and luteloin, have been found to suppress the growth of prostate cancer cells in vitro and in vivo (20,22). Treatment with WDL inhibits the growth of pituitary adenoma cells and mammary carcinosarcomas in vitro (23,24). Moreover, WDL can induce caspase-dependent apoptosis in prostate cancer cells via downregulation of PKCɛ (25).

Human peripheral blood, obtained from healthy adult volunteers, was collected in syringes containing 1000 U/ml of preservative-free heparin. The PBMCs were isolated by density centrifugation using Ficoll-Hypaque and were re-suspended in RPMI supplemented with 10% heat-inactivated fetal bovine serum. The PBMCs were then plated and incubated overnight at 37°C. CD14+ monocytes were isolated using CD14+ mAb-conjugated magnetic beads (MACS MicroBeads; Miltenyi Biotec), according to the manufacturer’s protocol. Monocytes were grown in culture medium containing vehicle or 200 ng/ml human M-CSF and 100 ng/ml human RANKL for 14–21 days. The medium was replaced every five days. The Institutional Review Board of the Kaohsiung Medical University Chung-Ho Memorial Hospital approved the study protocol and all patients provided written informed consent in accordance with the Declaration of Helsinki.

Osteoclast formation was measured by quantifying cells positively stained by tartrate-resistant acid phosphatase (TRAP) (Sigma-Aldrich). Briefly, cells were fixed by formaldehyde for 30 min and then stained with naphthol AS-BI phosphate and a tartrate solution for 1 h at 37°C, followed by counter-staining with a hematoxylin solution. Osteoclasts were determined to be TRAP-positive staining multi-nuclear (>3 nuclei) cells by light microscopy. The total number of TRAP-positive cells and number of nuclei per TRAP-positive cell in each well were counted.

CD14+ monocytes were plated into a calcium phosphate apatite-coated 48-well plate bone resorption assay (Cosmo Bio Co., Ltd., Tokyo, Japan) in the same culture conditions as described above. After a 14-day culture, each well was washed with saline. A solution of 5% sodium hypochlorite was left in the well for 5 min to detach the cells. The number of pits in each well was counted under a microscope.

Cells were lysed on ice for 15 min by M-PER lysis reagent (Thermo Fisher Scientific, Rockford, IL, USA). Cell lysate was centrifuged at 14,000 × g for 15 min and the supernatant fraction was collected for immunoblotting. Equivalent amounts of protein were resolved by SDS-PAGE (6–8%) and transferred to polyvinylidene difluoride membranes. After blocking for 1 h in 5% non-fat dry milk in TBS, the membrane was incubated with the desired primary Ab for 1–16 h. The membrane was then treated with appropriate peroxidase-conjugated secondary Ab and the immuno-reactive proteins were detected using an ECL kit (Millipore), according to the manufacturer’s instructions.

Data were expressed as means ± SD. Statistical comparisons were made using analysis of variance. Significant differences (p<0.05) between two test groups were analyzed by Student’s t-test.

To investigate if novel agents can inhibit osteoclasts, the effects of various phytoestrogens, including calycosin, formononetin, neobavaisoflavone, ononin, pinoresinol, and wedelolactone (WDL), on osteoclast differentiation were assessed. The addition of RANKL and M-CSF caused the formation of numerous TRAP-positive multi-nucleated osteoclasts (Fig. 1B). The differentiation of osteoclasts was significantly inhibited by WDL but other agents failed to affect osteoclastogenesis. Treatment of WDL decreased osteoclastogenesis in a dose-dependent manner (Fig. 1C). Moreover, WDL treatment substantially reduced osteoclastic bone resorption in a dose-dependent manner (Fig. 1D). These findings suggested that WDL inhibited osteoclast differentiation and bone resorption activity in vitro.

The molecular mechanism of WDL on osteoclastogenesis was investigated. The addition of M-CSF/RANKL increased the phosphorylation of Akt, mTOR, ERK1/2 and p38. The targets of mTOR, p70S6K, and 4EBP4 were also activated by M-CSF/RANKL, showing that Akt/mTOR signaling cascade was triggered in osteoclastogenesis. The activation of osteoclast inducers (M-CSF and RANKL) on Akt/mTOR signaling was inhibited by WDL (Fig. 3A).

Bone metastasis is a devastating development in patients with breast cancer because once this occurs, morbidity and mortality rates are markedly increased (2,4). Drugs that target osteoclastogenesis, such as bisphosphonates or anti-RANKL antibody (denosumab), decrease the incidence of skeletal complications and have been prescribed for the inhibition of cancer-mediated bone destruction (6). However, 30–50% of patients on such therapies still develop new bone metastasis, skeletal complications, and disease progression, emphasizing the need for new therapies (2,4,6). The present study is the first to demonstrate that WDL can inhibit breast cancer-induced osteolytic bone metastasis by decreasing the stimulatory effect of breast cancer on osteoclasts and breast cancer-mediated interaction of osteoblasts and osteoclasts.

Evaluation of osteoclast differentiation is characterized in breast cancer bone metastasis (4,12). An increase in osteoclastic bone resorption leads to the release of bone-derived growth factors that promote the growth and progression of breast cancer cells (4,12). Inhibiting osteoclast function provides a potential approach to preventing bone metastasis. Isolated from Eclipta prostrata and Wedelia chinensis, WDL belongs to the coumarin category of phytoestrogens. This is the first study that investigated and determined that WDL exhibits a direct inhibitory effect on osteoclast differentiation and bone resorption activity.

In addition, WDL also inhibits breast cancer MDA-MB-231-mediated osteoclastogenesis and bone degradation. This finding suggests that WDL possesses therapeutic potential in the treatment of breast cancer bone metastasis. The impact of metastasized cancer cells on the bone interrupts the interaction between the activities of osteoclasts and osteoblasts (26). Osteoblasts perform vital roles in the regulation of skeleton physiology because they not only act as precursors of osteocytes but are also dual regulators of osteoclast differentiation (27,28). Osteoblasts stimulate osteoclast formation from osteoclast precursors by producing M-CSF and RANKL (29). In contrast, osteoblasts inhibit osteoclastogenesis via secreting OPG, a decoy receptor for RANKL to block the binding of RANKL to its receptors on pre-osteoclasts, RANK (13).

Cancer can alter the expressions of M-CSF, RANKL, and OPG in osteoblasts, facilitating cancer-associated osteolytic bone metastasis (14,30). In this study, breast cancer MDA-MB-231 cells increased the expressions of M-CSF and RANKL but decreased OPG expression, thereby increasing osteoclastogenesis and the bone resorption activity. This upregulation of M-CSF by MDA-MB-231 is prevented by WDL, resulting in a decrease in breast cancer-associated osteocleogenesis and bone resorption. This study revealed that WDL can mend the imbalanced interaction of osteoblasts and osteoclasts in breast cancer-mediated skeletal micro-environment.

Akt is a critical mediator of cell proliferation, survival and differentiation in a variety of cell types (31). Akt has been identified as being involved in the regulation of osteoclast survival and differentiation, whereas its deficiency in osteoclasts results in impaired bone resorption (32,33). mTOR, a downstream molecule of Akt, has also been shown to be involved in the regulation of osteoclast survival (34). Inhibition of the mTOR pathway by rapamycin, an mTOR inhibitor, decreases the number of TRAP-positive multi-nucleated osteoclasts in the chondro-osseous junction in rats (35). 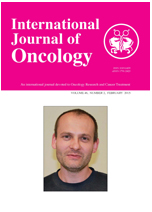