Recent clinicopathological studies identified a unique subgroup of diffuse large B-cell lymphoma (DLBCL) that expresses CD5 on the cell surface. This ‘de novo CD5+ DLBCL’ comprises 10% of all DLBCL and has a poorer prognosis than CD5− DLBCL. Comparison of gene expression profiles between de novo CD5+ DLBCLs and CD5− DLBCLs shows that de novo CD5+ DLBCL expresses high levels of integrin β1 in tumor cells and CD36 in the vascular cells. On the other hand, comparison between mantle cell lymphomas (MCLs) and DLBCLs expectedly identified cyclin D1 as a top feature gene. To gain insight into the molecular pathway differences among the three types of lymphoma, we evaluated the functional categories of groups of genes important for the discrimination among the three groups. We first selected 280 (from 2,142) genes, according to their individual discriminatory power. We then used the gene-shaving clustering algorithm and identified 22 clusters of genes. Of the 22 clusters, six were highly correlated with the class labels of the patients and the top three clusters accounted for the major difference among the three lymphoma subtypes. A multidimensional scaling (MDS) analysis using the average genes from the top three clusters separated the three lymphoma subtypes quite well. The functions of the genes in the top three gene clusters showed a significant enrichment of metabolism and signal transduction. To further examine whether genes of particular functions reflect more faithfully the difference between the subtypes of lymphomas, we separated the 280 informative genes into six different functional groups and performed MDS analysis using each of the gene groups. Four of the gene-function groups (metabolism, signal transduction pathway, transcriptional factors, cell adhesion and migration), separated the three lymphoma subtypes well, whereas apoptosis genes and cell cycle genes did not result in good separation. 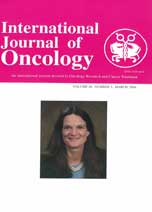