The cytostatic and cytotoxic effects of oridonin (Rubescenin), a diterpenoid from Rabdosia rubescens, on tumor cells of different lineage

Rabdosia rubescens is a herbal medicine used to treat esophageal cancer in China. In this study, the sesquiterpene oridonin, an isoprenoid, was isolated from Rabdosia rubescens. Mass spectroscopy and carbon 13 NMR spectroscopy were used to identify the structure of the purified compound. It was then evaluated for biological activity against human cell lines derived from prostate (DU-145, LNCaP), breast (MCF-7), and ovarian (A2780 and PTX10) cancers. Oridonin exhibited anti-proliferative activity toward all cancer cell lines tested, with an IC50 estimated by the MTT cell viability assay ranging from 5.8±2.3 to 11.72±4.8 µM. Flow cytometric analysis demonstrated that oridonin induced a G1 phase arrest in androgen receptor-positive LNCaP cells containing wt p53, while it blocked the cell cycle at G2 and M phases in androgen receptor-negative DU-145 cells with mutated p53; the arrest in M was verified by examination of cell morphology and by the increased frequency of cells with Ser-10 phosphorylated histone H3. The increased incidence of apoptosis, identified by characteristic changes in cell morphology, was seen in tumor lines treated with oridonin. Notably, at concentrations that induced apoptosis among tumor cells, oridonin failed to induce apoptosis in cultures of normal human fibroblasts. Western blot analysis was used to determine the protein expression of cancer suppressor genes, p53 (wt) and Bax, and the proto-oncogene, Bcl-2 in LNCaP cells following treatment with oridonin. Oridonin up-regulated p53 and Bax and down-regulated Bcl-2 expression in a dose-dependent manner. To further explore the possible interaction between oridonin and DNA, its absorption spectrum was measured in the presence and absence of double stranded (ds) DNA. Spectral shifts and an increase in absorption band intensity were observed indicating interaction of oridonin with DNA bases. The nature of the binding is not clear at present though no evidence of histone H2AX phosphorylation on Ser-139 was apparent in DU-145 cells treated with oridonin that would indicate the induction of ds DNA breaks. In conclusion, oridonin inhibits cancer cell growth in a cell cycle specific manner and shifts the balance between pro- and anti-apoptotic proteins in favor of apoptosis. The present data suggest that further studies are warranted to assess the potential of oridonin in cancer prevention and/or treatment. 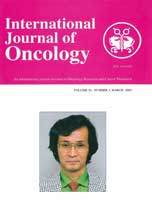