We investigated the effects of finasteride, a 5α-reductase inhibitor, on cell death machinery through the induction of apoptosis in an in vitro model for prostate cancer. Finasteride treatment of the LNCaP hormone-dependent human prostate cancer cell line caused the loss of cell viability and accelerated apoptosis in a concentration-dependent manner. The contents of immunoreactive procaspase-3 were examined by immunoblot analysis and the results suggest that the apoptosis induced by finasteride involves the increase of caspase-3 activity. Early cell changes that occur during apoptosis are associated with mitochondrial changes mediated by members of the Bcl-2 family of proteins. Therefore, Bcl-2, Bcl-xL and Bax were evaluated by the Western blot analysis. The immunoreactivity for pro-apoptotic Bax was markedly increased whereas antiapoptotic Bcl-2 and Bcl-xL expression was significantly reduced after incubation of cells with finasteride. These findings suggest that finasteride induces apoptosis in LNCaP cells via proteins of the Bcl-2 and caspase family. 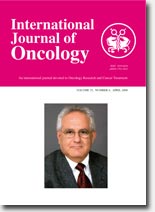