Receptor tyrosine kinases play important roles in the control of normal cell growth and differentiation. Molecular alterations such as point mutations and rearrangements result in activation of these genes as oncogenes. The ret proto-oncogene (proto-ret) encodes a receptor tyrosine kinase that contains a cadherin-related sequence in the extracellular domain. Transcription of the proto-ret gene has been frequently detected in human tumors such as neuroblastoma, pheochromocytoma and thyroid medullary carcinoma, all of which originate from neural crest cells. When expression of the proto-Ret protein was examined immunohistochemically in normal rat tissues, it was observed in some of peripheral ganglion cells. These findings strongly support the view that the proto-ret gene might be involved in the differentiation and proliferation of neural crest cells. The proto-ret gene was assigned to chromosome 10q11.2. Genes for multiple endocrine neoplasia type 2A and type 2B (MEN2A and MEN2B) and Hirschsprung disease have also been mapped to the proximal long arm of chromosome 10 and closely linked to the locus of the proto-ret gene. MEN2A and MEN2B are characterized by the development of pheochromocytoma and thyroid medullary carcinoma and Hirschsprung disease represents a congenital disorder associated with intestinal aganglionosis. Recently, germ line mutations were found to be present in the extracellular domain of the proto-ret gene in most of MEN2A families. These findings suggested the proto-ret gene as a candidate for MEN and Hirschsprung genes. In addition, rearrangement of the proto-ret gene have frequently been detected in thyroid papillary carcinomas. 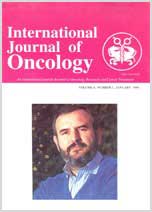