Proteomics of rat prostate lobes treated with 2-N-hydroxylamino-1-methyl-6-phenylimidazo[4,5-b]pyridine, 5α-dihydrotestosterone, individually and in combination

Epidemiological and preclinical studies suggest that environmental factors, hormonal responses and lifestyle, including diet and physical inactivity, are likely contributors to the initiation and progression of prostate cancer in humans. Although the effects of the food derived carcinogen 2-amino-1-methyl-6-phenylimidazo[4,5-b]pyridine (PhIP) and/or testosterone (T) in the development of prostate cancer in the rat have been reported, the extent to which such compounds impact cancer related proteins is not clear. Knowledge of cancer-related proteins impacted by PhIP and/or T is prerequisite to developing novel strategies to early-detect prostate cancer. Male F344 rats were sacrificed, the prostate tissue isolated and separated into dorsolateral, ventral, and anterior lobes. The lobes were cultured and treated with 10−3 M NHPhIP and/or 10−7 M DT for 24 h. NHPhIP is the genotoxic form of PhIP and DT is the more proliferative form of T. We used 2D-DIGE and LC/MS/MS technologies to study the proteome of the prostate lobes to determine if the compounds will trigger detectable changes in expression of cancer-related proteins. Analysis of the signals from 2D-DIGE revealed that about 10% of proteins were differentially expressed in the NHPhIP and/or DT treatments compared to controls. Eight candidate protein spots detected by 2D-DIGE in at least two out of three lobes showed ≥2-fold difference between treated and control samples. Five out of the eight spots contained single proteins; including, phospholipase Cα (PLP-Cα), Rab7, SAR1a, ribosomal protein S7 (RPS7), and nucleoside diphosphate kinase (NDPK). A survey of the literature shows that NDPK expression is altered in human cancers, including prostate cancer. Thus, we validated the altered expression of NDPK by Western blot analysis. The concordance between 2D-DIGE and Western blot analysis was 80%. The results of this study demonstrate, for the first time, that the combination of 2D-DIGE and LC/MS/MS is a powerful tool for identification of proteins in the prostate tissue that are altered by environmental carcinogens and/or hormones. 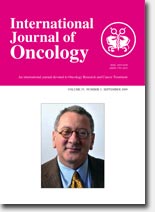