Resistance to platinum is a major limitation for the treatment of ovarian cancer. In an effort to overcome the platinum resistance problem in ovarian cancer treatment, we explored the correlation between cisplatin resistance and the human AP endonuclease (APE1 or Ref-1). APE1/Ref-1 is a multifunctional protein that is not only an essential enzyme in base excision repair pathway, but also acts as a major redox-signaling factor that has a wide variety of important cellular functions including transcription factor regulation, oxidative signaling and cell cycle control. In this study, we examined APE1/Ref-1 expression by immunohistochemistry in sections of ovarian cancers from 78 patients who were administered standard adjuvant chemotherapy based on platinum post-operatively. Altered levels and subcellular APE1/Ref-1 expression was found in patients not responding to platinum-based chemotherapy comparing with those who responded to platinum-based chemotherapy. Meanwhile, we detected the APE1/Ref-1 expression in A2780 and CP70 cell lines which have different sensitivity to cisplatin. We found similar altered APE1/Ref-1 expression in them. We hypothesized that the APE1/Ref-1 expression is responsible in part for the cisplatin resistance. To answer this hypothesis, we decreased the APE1/Ref-1 level by silencing RNA targeting technology in A2780 and CP70 cell lines. The A2780 cells treated with APE1-siRNA had IC50 values ranging from 6.70 to 1.74 µM cisplatin compared with 15.81 µM for control A2780 cells. The CP70 cells treated with APE1-siRNA had 1.62-4.63-fold enhancement in cisplatin sensitivity. The apoptosis assays using TUNEL analysis showed that decreased APE1/Ref-1 level resulted in increased apoptosis levels in A2780 and CP70 cell lines compared with the control-treated cells. These data suggest that APE1/Ref-1 levels play an important role in the sensitization of ovarian cancer cells to apoptosis. In vitro studies revealed that it is possible to substantially enhance the cisplatin cytotoxicity by decreasing APE1/Ref-1 level in cisplatin-resistant cell lines. 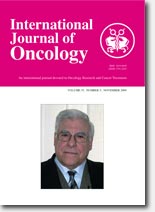