Green tea catechins have been reported to have antitumor activity. The objective of this study was to examine the effect of catechins on the antitumor efficacy of doxorubicin (DOX) in a murine model for chemoresistant hepatocellular carcinoma (HCC). Epicatechin gallate (ECG) and epigallocatechin gallate (EGCG) are the most abundant polyphenolic compounds in green tea. Here, we show that ECG or EGCG at higher doses had a slight inhibitory effect on cell proliferation in the resistant human HCC cell line BEL-7404/DOX in vitro and in vivo, whereas the administration of DOX with these compounds at lower doses significantly inhibited HCC cell proliferation in vitro and hepatoma growth in a xenograft mouse model, compared with treatment with either agent alone at the same dose. Furthermore, the administration of DOX in combination with ECG or EGCG markedly enhanced intracellular DOX accumulation, which implies that the catechins inhibited P-glycoprotein (P-gp) efflux pump activity. Consistent with these results, the intracellular retention of rhodamine 123, a P-gp substrate, was increased and the level of P-gp was decreased in cells concurrently treated with DOX and ECG or EGCG. EGCG increased topo II expression, but did not alter GST protein levels in tumor xenografts. The expression of MDR1 and HIF-1α mRNA was obviously reduced, whereas MRP1 and LRP expression was not changed significantly. These data suggest that tea catechins at non-toxic doses can augment DOX-induced cell killing and sensitize chemoresistant HCC cells to DOX. The chemosensitizing effect of catechins may occur directly or indirectly by reversal of multidrug resistance, involving the suppression of MDR1 expression, or by enhancement of intracellular DOX accumulation, involving inhibition of P-gp function. 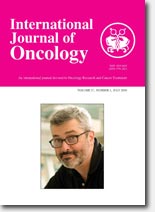