Serum iron levels have been reported to increase following the administration of various anticancer drugs. an increase in serum iron levels during therapy with leucovorin and fluorouracil plus oxaliplatin (FOLFOX) or leucovorin and fluorouracil plus irinotecan (FOLFIRI) was also observed. The aim of this study was to investigate the correlation between serum iron levels and prognosis in advanced colorectal cancer (CRC) patients treated with FOLFOX/FOLFIRI ± molecularly‑targeted drugs. Serum iron levels were measured prior to and at 48 h after treatment with FOLFOX/FOLFIRI ± molecularly‑targeted drugs in 72 advanced CRC patients, all of whom succumbed to the disease between December, 2005 and February, 2012. No patients received radiotherapy. Taking the median rate of increase in serum iron levels as the cut‑off value in each therapy, the patients were divided into cohort I (increase rate greater than the cut‑off value in at least one therapy) or cohort II (increase rate less than the cut‑off value in all therapies). The χ2 test and the t‑test were used to compare patient characteristics between the two cohorts. Prognosis was evaluated between the two cohorts using the Kaplan‑Meier method, the log‑rank test and the Cox proportional hazards regression analysis. No significant bias in patient characteristics (including the frequency of chemotherapy or number of patients treated with molecularly‑targeted drugs) was observed between the two cohorts. Serum iron levels were transiently elevated following treatment (P<0.001), returning to baseline within 2 weeks. Median survival time (MST) in cohort I (n=44) and cohort II (n=28) was 430 and 377 days, respectively. The MST was significantly higher in cohort I (P=0.0382). The multivariate analysis identified a small increase in serum iron levels as an independent risk factor for overall survival (OS). These results suggest that serum iron levels may be used as a new predictive factor in FOLFOX/FOLFIRI ± molecularly‑targeted drug therapy. Serum iron levels may therefore prove to be a useful and convenient biomarker for OS in CRC patients.

The prediction of the host response to an administered therapy by means of a serum biomarker may offer a useful and convenient prognostic or predictive factor in the planning of cancer treatment. Follézou and Bizon (1) reported an increase in serum iron levels following administration of various anticancer drugs, including 5-FU, actinomycin D, adriamycin and cyclophosphamide. Recently, we also reported a significant increase in serum iron levels during therapy with leucovorin and fluorouracil plus oxaliplatin (FOLFOX) or leucovorin and fluorouracil plus irinotecan (FOLFIRI). Moreover, the levels of aspartate aminotransferase, alanine aminotransferase and hemoglobin were unaffected and the levels of transferrin and ferritin were only minimally altered during chemotherapy, while a molecularly-targeted drug exerted no effect on serum iron levels (2).

The aim of this study was to investigate the correlation between serum iron levels and prognosis in advanced colorectal cancer (CRC) patients treated with FOLFOX/FOLFIRI ± molecularly-targeted drugs, in order to establish their potential as a new biomarker.

Seventy-two patients with unresectable advanced or metastatic CRC were enrolled in this study. Treatments based on the Japanese Society for Cancer of the Colon and Rectum guidelines were administered to all the patients at our institution (3). Patients were treated with FOLFOX or FOLFIRI therapy alone or in combination with molecularly-targeted drugs (bevacizumab/cetuximab/panitumumab). All patients succumbed to their disease between December, 2005 and February, 2012. No patients received radiotherapy. Informed consent for the measurement of serum iron levels was obtained from the patients. Approval for this study was obtained from the Tobu Chiiki Hospital Institutional Review Board (no. 12.09.10. no. 2).

Patient characteristics were compared between the two cohorts using the χ2 test (gender, number of patients treated with molecularly-targeted drugs, Dukes’ stage, histological type, primary tumor site and recurrence type) and the t-test (age and frequency of chemotherapy). The median survival time (MST) by cut-off value of serum iron levels was calculated by the Kaplan-Meier method. The overall survival (OS) curves of the two cohorts as determined by the cut-off value were compared by the log-rank test. The Cox proportional hazards regression analysis was used in the univariate and multivariate analyses of prognostic factors for OS. P<0.05 was considered to indicate a statistically significant difference. Data were expressed as the means ± SD and were analyzed using SPSS for Windows version 15 (SPSS Inc., Chicago, IL, USA).

The MST in cohorts I (n=44) and II (n=28) was 430 and 377 days, respectively. The MST was significantly higher in cohort I (P=0.0382) (Fig. 3). The results of univariate analysis are shown in Table IV. A significant difference was observed in the serum iron levels. Multivariate analysis identified a small increase in the serum iron levels as an independent risk factor for OS (Table V).

CRC is the third most common type of cancer worldwide and the fourth most common cause of cancer-related mortality (4). The OS rate in advanced CRC patients has increased over the past decade as a result of advances in chemotherapy. An increase in serum iron levels with the administration of various anticancer drugs was first reported several decades ago. We recently reported a significant increase in serum iron levels during FOLFOX or FOLFIRI therapy (2). In the present study, serum iron levels were investigated as a potential new biomarker of prognosis in chemotherapy.

Biomarkers play an important role in cancer diagnosis, prognosis, treatment and monitoring. Several biomarkers have been investigated with the development of new molecular biological techniques and advances in cancer biology. Preoperative increases in the serum levels of carcinoembryonic antigen, C-reactive protein (CRP), pro-inflammatory cytokine interleukin-6 (IL-6) and other markers have been reported to provide prognostic information (5–16). Prognostic factors for human CRC have been the focus of extensive investigation (17–19). Serum biomarkers have attracted attention as they offer a minimally invasive and convenient tool for determining prognosis. Serum iron levels are determined during the course of routine blood analysis. Therefore, they are a potential easy-to-use biomarker for chemotherapy in advanced CRC patients.

Iron is essential to all human cells, playing an important role in numerous biological processes, such as electron and oxygen transport and DNA synthesis (20,21). However, excess iron poses a threat to cells and tissues due to its ability to catalyze the generation of reactive radicals (22). Therefore, serum iron levels are strictly regulated in the human body (23), mainly by the peptide hepcidin, which is produced in the liver (24–26). Hepcidin is a key regulator of the metabolism of iron, controlling absorption and recycling (27,28). Hepcidin decreases intestinal iron absorption and increases its retention in reticuloendothelial cells (26). The target of hepcidin action is the iron exporter ferroportin, which is mainly present in the basolateral membranes of enterocytes and the cell membranes of macrophages and hepatocytes (29). Hepcidin is increased by iron loading and IL-6 and decreased by anemia or hypoxia (27,30–33). The majority of the iron required by the bone marrow for erythropoiesis is provided by recycling iron from senescent red blood cells via macrophages.

In this study, serum iron levels were transiently elevated following chemotherapy, returning to baseline within 2 weeks. A number of factors may have contributed to this phenomenon. Erythropoiesis, which consumes the largest amount of iron in the body, exerting a profound effect on its distribution and metabolism, is suppressed by chemotherapy. The subsequent reduction in iron consumption for hemoglobin synthesis may have caused this transient increase in serum iron levels. Vokurka et al(34) observed an increase in the expression of hepcidin associated with the irradiation-induced suppression of erythropoiesis in mice. Continuous iron absorption in the gut and its release from macrophages is highly undesirable in situations where erythropoiesis is suppressed. Moreover, the increase in the expression of hepcidin was observed even in the presence of severe anemia due to inhibition of hematopoiesis by irradiation. Hemolysis and anemia decrease hepcidin expression only when erythropoiesis is functional. However, if erythropoiesis is arrested, even severe anemia does not lead to a decrease in hepcidin expression, which is significantly increased. Hepcidin expression during chemotherapy was not measured in the present study. However, if such an increase in the expression of hepcidin was triggered by chemotherapy, the underlying mechanism may be similar to that induced by irradiation.

There were several limitations to this study. First, the patient sample was limited. A larger patient sample may improve data quality. Second, although serum iron levels appear to be a biomarker for OS, the correlation between the increase in serum iron levels and prognosis has not been fully elucidated, nor has that between increases in CRP or IL-6 and prognosis. In addition to cancer cells, chemotherapy suppresses erythropoiesis. If an increase in serum iron levels is the result of suppression of erythropoiesis, this may also indicate suppression of cancer cell proliferation. Third, neither hepcidin as a key regulator of iron metabolism nor IL-6 as a main inducer of hepcidin expression were investigated in the present study. A study on a larger patient population is currently being planned to investigate the association of systemic iron metabolism with the clinical outcome of chemotherapy.

In conclusion, no significant difference was observed in the frequency of chemotherapy or the number of patients treated with molecularly-targeted drugs between the two cohorts. Cohort I exhibited a statistically significant improvement in prognosis. Furthermore, the multivariate analysis revealed that the change in serum iron levels was an independent predictive variable. These results suggest that serum iron levels may be a useful and convenient biomarker for OS in CRC patients.

The authors would like to thank Associate Professor Jeremy Williams, Tokyo Dental College, for his assistance with the English translation of this manuscript. 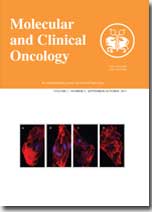