Prognostic significance of the co‑overexpression of fibroblast growth factor receptors 1, 2 and 4 in gastric cancer

The overexpression of fibroblast growth factor receptor (FGFR) 2 is an established prognostic factor and treatment target in gastric cancer. However, the roles of other FGFRs have not been fully elucidated. In this study, we investigated the correlations of the expression of FGFR1‑4 with clinicopathological characteristics and outcomes in gastric cancer. Tumor samples were obtained from 222 patients with gastric adenocarcinoma who underwent gastrectomy between 2003 and 2007. The expression of each FGFR was measured in the tumors by immunohistochemical analysis. The overexpression of FGFR1, FGFR2 or FGFR4 was found to be significantly associated with tumor progression, including depth of invasion, lymph node metastasis, pathological stage and distant metastasis or recurrent disease. Patients exhibiting overexpression of FGFR1, FGFR2 or FGFR4 had a significantly poorer disease‑specific survival (DSS; P<0.001, P=0.008 and P<0.001, respectively). Moreover, the co‑overexpression of all three FGFRs was significantly associated with a poorer DSS compared to the expression of none or only one of the FGFRs (P<0.001 and P=0.001, respectively) and it was found to be an independent prognostic factor (HR=1.71, 95% CI: 1.02‑2.85, p=0.041). In conclusion, high expression of FGFR1, FGFR2 or FGFR4 was associated with tumor progression and poor survival in patients with gastric cancer. Similar to FGFR2, FGFR1 and FGFR4 may be considered as prognostic factors and treatment targets in gastric cancer.

Gastric cancer is the second leading cause of cancer-related mortality worldwide, accounting for ~1 in 10 of all deaths from cancer (1). The outcome of gastric cancer is generally poor, with a 5-year relative survival of <30% in most countries (2). Although radical surgery remains the cornerstone of treatment for gastric cancer, surgery alone appears to have reached its limits in terms of local control and survival. The achievement of locoregional control remains difficult in the presence of advanced disease (3). The majority of patients with advanced gastric cancer receive palliative chemotherapy, which is associated with a median survival of 11–12 months (4). In addition to standard cytotoxic regimens, targeted therapies, using small molecules or antibodies designed to disrupt the activity of specific oncogenic signaling pathways, have recently emerged as a promising treatment strategy. A number of receptor tyrosine kinases (RTKs) have been associated with tumor progression and patient outcomes in various types of cancer. RTK inhibitors, such as human epidermal growth factor receptor (HER), have been evaluated and some have been used to treat gastrointestinal cancers. In a recent ToGA trial (5), trastuzumab, a monoclonal antibody against the p185HER2 protein, improved the overall survival of patients with HER2-positive tumors when combined with chemotherapy. However, only 7–17% of gastric cancer patients have HER2-positive tumors and are considered as suitable candidates for anti-HER2 therapy (6,7). Further investigations are required to increase the number of patients with gastric cancer for whom targeted treatments may be a viable clinical option.

The fibroblast growth factor receptor (FGFR) family (FGFR1-4) belongs to the receptor tyrosine kinase superfamily. FGFRs regulate fundamental developmental pathways by interacting with fibroblast growth factors (FGFs) and thereby control a wide range of events, extending from mesoderm patterning in the early embryo to the development of multiple organ systems (8,9). FGF signaling participates in several biological functions in the adult organism, including regulation of angiogenesis and wound repair. FGFRs are expressed on a number of different cell types and regulate key cell activities, such as proliferation, survival, migration and differentiation, which renders FGF signaling susceptible to subversion by cancer cells (10).

FGFR2 amplifications have been reported in 10% of gastric cancers, the majority of which are of the diffuse type (11). FGFR2 amplification may correlate with poor outcomes in patients with diffuse-type gastric cancer (12). Moreover, the presence of FGFR2 gene amplification in gastric cancer is associated with sensitivity to inhibition of FGFR signaling by tyrosine kinase inhibitors and monoclonal antibodies in preclinical models (13,14). Thus, FGFR2 has attracted considerable attention as a novel therapeutic candidate for the development of targeted anticancer agents (15).

In contrast to FGFR2, the roles of FGFR1, FGFR3 and FGFR4 have not been fully elucidated. Overexpression of these FGFRs in gastric cancer was reported by a few small studies (16–19). In this study, we aimed to investigate the correlations of FGFR1-4 immunohistochemical expression with clinicopathological characteristics and outcomes in gastric cancer.

Our study group comprised 222 patients with primary gastric adenocarcinoma who underwent surgical resection between January, 2003 and December, 2007 in the Department of Esophagogastric Surgery, Tokyo Medical and Dental University. Each tumor was classified according to the tumor-node-metastasis staging system recommended by the International Union Against Cancer. Of the 222 patients, 168 were men and 54 were women. The mean age of the patients was 64.6 years (range, 21–92 years). All the patients were evaluated for recurrent disease by tumor marker analysis or diagnostic imaging (computed tomography, ultrasonography, magnetic resonance imaging and endoscopy) every 3–6 months. Patients with distant metastasis or recurrent disease received chemotherapy with S-1 alone or combined chemotherapy. A total of 20 patients (9%) received adjuvant chemotherapy with S-1 following radical resection. All the patients were followed up until July, 2012. The median follow-up was 60 months (range, 3–111 months). A total of 77 patients (35%) succumbed to gastric cancer, 66 (30%) had recurrent disease and 11 (5%) died from other causes.

Immunostaining of the FGFR family

The staining intensity was scored into four grades as follows: 0, no staining; 1, weakly positive; 2, moderately positive; and 3, strongly positive. The staining extent (positive frequency) was also scored into four grades according to the percentage of stained tumor cells as follows: 0, complete absence of staining; 1, ≤20%; 2, >20 to ≤50%; and 3, >50% stained cells. Composite scores were derived by addition of the intensity score and the staining extent score. For the statistical analysis, composite scores of ≥4 were defined as high expression and scores of <4 as low expression. Two investigators (Hideaki Murase and Yoko Takagi), who were blinded to the patients’ outcomes separately counted the stained cancer cells. Any disagreements between the two investigators were resolved by reassessment and consensus.

The statistical analysis was performed using IBM SPSS Statistics 20 software (IBM, Inc., Armonk, NY, USA). The χ2 test was used to investigate the possible associations between the expression of each FGFR receptor and clinicopathological variables. The χ2 test was also used to assess the correlations between FGFR expressions. The Mann-Whitney U test was used to analyze the associations between FGFR expression and patient age. Kaplan-Meier curves were plotted to assess the effects of FGFR expression on disease-specific survival (DSS) and different DSS curves were compared using the log-rank test. Multivariate proportional Cox models were used to assess the prognostic significance of FGFR and of factors associated with DSS. P<0.05 was considered to indicate a statistically significant difference.

Immunohistochemical analysis of the FGFR family

Correlations among the expressions of FGFR1, FGFR2, FGFR3 and FGFR4.

Correlations of the expressions of FGFR1, FGFR2, FGFR3 and FGFR4 with clinicopathological factors.

Prognostic factors in univariate and multivariate Cox proportional-hazards regression models for DSS in the study group as a whole.

Co-overexpression of FGFR1, FGFR2 and FGFR4

Prognostic factors in multivariate Cox proportional-hazards regression models for disease-specific survival of patients with co-overexpression of FGFR1, FGFR2 and FGFR4.

FGFR-dependent signaling occurs through two main pathways: via the intracellular receptor substrates FGFR substrate 2 (FRS2) and phospholipase Cg (PLCg), ultimately upregulating the Ras-dependent mitogen-activated protein kinase, and the Ras-independent phosphoinositide 3-kinase-Akt signaling pathways (15). Other pathways may also be activated by FGFRs, including STAT-dependent signaling (20). Although all four FGFRs generally signal through a similar network of pathways, a number of qualitative and quantitative differences have been identified and FGFR-specific differences in signaling pathways associated with genetic alterations of each FGFR have been confirmed in different types of cancer (21–24).

FGFR1 amplification was previously identified in breast (25), ovarian (26), bladder (27) and lung cancer (28). In gastric cancer, a previous study reported the presence of FGFR1 amplifications in 12 (50%) of the 24 cases and FGFR1 protein was overexpressed in 37 (61%) of the 61 specimens on immunohistochemical analysis using a monoclonal antibody that differed from the one used in the present study. However, that study reported no significant correlation between FGFR1 expression and clinicopathological characteristics (17). To the best of our knowledge, the present study is the first to demonstrate that the high expression of FGFR1 is associated with poor survival in gastric cancer. The overexpression of FGFR1 was also found to be correlated with liver metastasis in colorectal cancer (29), whereas the amplification and overexpression of FGFR1 may contribute to poor outcomes in luminal-type breast cancer by driving anchorage-independent proliferation and resistance to endocrine therapy (25). The co-overexpression of FGF1 and FGFR1 has also been associated with poor outcomes in esophageal squamous cell carcinoma (30); however, we did not assess FGF expression in this study.

The FGFR4 Gly388Arg polymorphism has attracted considerable attention since the discovery of this germline polymorphism by Bange et al (31). In the human FGFR4 gene, a single-nucleotide polymorphism (SNP) from G to A at codon 388 at exon 9 changes the amino acid sequence of FGFR4 from glycine to arginine (Gly388 to Arg388). FGFR4 Gly388Arg was found to be associated with poor outcomes in breast (32), ovarian (33), lung (34) and gastric cancer (18). FGFR4 amplification was also found in pancreatic (35), renal cell (36) and gastric cancer (19). Ye et al (19) reported that the high expression of FGFR4 is associated with lymph node metastasis and a trend toward worse survival. Our findings are consistent with the findings of that study.

FGFR-targeted therapeutics using small-molecule compounds that inhibit binding of FGF to FGFR is an active topic in the field of clinical oncology (54). Ki23057, a FGFR2 inhibitor, was reported to enhance the chemosensitivity of drug-resistant gastric cancer cells (55). Inhibition of FGFR2 signaling by AZD4547, a selective inhibitor of FGFR1, FGFR2 and FGFR3, was shown to significantly inhibit tumor growth in a dose-dependent manner in FGFR2-amplified xenografts (56). AZD4547 is currently being compared to paclitaxel as second-line treatment for patients with gastric cancer whose tumors exhibit FGFR2 gene amplification (NCT01457846, SHINE). Monoclonal antibodies that selectively recognize FGF or FGFR represent additional options for FGFR-targeted cancer therapy. Anti-FGFR2 monoclonal antibodies inhibit the in vivo growth of SNU-16 and OCUM-2M gastric cancer cells with FGFR2 gene amplification (13). Our results suggested that a selective inhibitor of FGFR1, FGFR2 and FGFR4 or the combined use of anti-FGFR1, -FGFR2 and -FGFR4 monoclonal antibodies may represent an effective FGFR-targeted therapy for gastric cancer.

In conclusion, high expression of FGFR1, FGFR2 or FGFR4 may be associated with tumor progression and poor survival in patients with gastric cancer. Similar to FGFR2, FGFR1 and FGFR4 may represent future prognostic factors and treatment targets in gastric cancer. 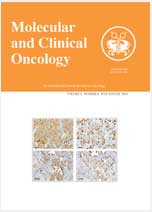