Ovarian tumor is the most common female tumor type. Epidemiological data indicates a steady rise of the incidence rate in Europe and Asia. In the USA, the mortality of ovarian cancer is ~67.7% annually (1). The histological type of most ovarian tumors is serous ovarian tumor. Ovarian serous carcinomas account for 70% of all ovarian carcinomas. Therefore, further research on ovarian tumors is required so that treatment can be successful. Paired box gene (PAX)2 belongs to the PAX family, consisting of nine members, PAX1-9. The genes of the PAX family have a conserved DNA sequence motif, which comprises a 128 amino acid domain in the amino-terminal portion of the protein (2). The role of PAX2 is crucial to embryogenic development, morphogenesis and organogenesis (3). PAX2 overexpression is associated with tumor types, including renal cell carcinoma, breast cancer and ovarian cancer (4–6). Estrogens influence numerous physiological processes in mammals, which mediates its effects through the estrogen receptor (ER). The ER exists in two predominant forms, ERα and ERβ. ERα is used as a therapeutic target and the presence of ERα may be effective for endocrine therapy of tumors. It has been previously reported that PAX2 is activated by estradiol via ERα in breast cancer (7). It was also reported that PAX2 was a common target of estrogen- and tamoxifen (ER agonist)-bound ERα and can promote the growth of endometrial cancer cells (8). Therefore, a correlation may exist between PAX2 and ERα in ovarian tumors, which little attention has been paid to. In the present study, the expression of ERα was detected in ovarian tumor types and the correlation between PAX2 and ERα was assessed.

A total of 58 patients with ovarian serous tumor types, including serous cystadenomas (n=30), borderline serous cystadenomas (n=16), serous carcinomas (n=12) and patients of ovarian mucinous tumors (n=67), including mucinous cystadenoma (n=29), borderline mucinous cystadenoma (n=23), mucinous carcinoma (n=15), were from the Beilun People's Hospital of Ningbo (Zhejiang, China). Patients who received no pre-operative chemoradiation treatment and had post-operative diagnosis as ovarian tumors were randomly selected for the present study. All specimens were the same as used in our previous study (9). It should be noted that one of ovarian mucinous tumors in our previous study was not included in the present study due to a lack of tissue. The samples were collected and 10% neutral formalin-fixed following surgery and paraffin-embedded following dehydration. Hematoxylin and eosin staining and immunohistochemical analysis was used on the basis of the availability of archived paraffin-embedded tissue blocks. Ethical approval was obtained from the hospital and informed consent was obtained from all patients prior to the study. Tumor histological type was based on currently used histopathologic criteria and the histological characteristics were reviewed by two pathologists in a blinded manner.

The ERα levels were measured by immunohistochemical analysis. Briefly, the specimens were sectioned (4 µm thick) using a paraffin slicing machine, mounted onto poly-L-lysine-coated glass slides and allowed to dry at 65°C for 30–60 min. The slides were subsequently deparaffinized in xylene and transferred through three changes of 95% ethanol. The samples were then transferred into water. For antigen retrieval, the slides were boiled in a pressure cooker at maximum heat for 3 min containing 0.01 mol/l sodium citrate (pH 6.0) and cooling for 30 min at room temperature. Endogenous peroxidase activity was inhibited in 0.3% H2O2 for 8 min at room temperature. Following incubation, the slides were washed three times in phosphate-buffered saline (PBS) for 2 min. The slides were incubated primary antibodies against rabbit anti-ERα (cat. no. ab37438; Abcam, Cambridge, UK) at 1:100 dilution for 1 h at 37°C. After washing three times in PBS for 2 min each, the bound primary antibody was detected using a ready-to-use secondary antibody kit (cat. no. K5007; Dako, Carpinteria, CA, USA) for 30 min at room temperature and the chromogenic substrate 3,3-diaminobenzidine. The slides were washed in distilled water, counterstained with hematoxylin, dehydrated and mounted with permanent media.

The appropriate positive and negative controls were included in the sections. Expression levels of ERα were evaluated by counting at least 500 tumor cells in representative high-power fields. Only tumor cells with nuclear staining were considered positive for ERα. Tumor cell percentage was scored as follows: 0 = <1% positive; 1 = ≥1 and <10% positive; 2 = 10–75% positive; 3 = >75% positive. Scoring criteria for staining intensity was as follows: 0 = no staining; 1 =weak; 2 = moderate; 3 = strong staining. The staining index was evaluated as the product of the percentage of positive tumor cells and staining intensity score. Using this method of estimation, the expression of ERα in the tumors was evaluated by determining the staining index with scores of 0, 1, 2, 3, 4, 6 or 9, and ‘-’ for 0 or 1, ‘+’ for 2, ‘++’ for 3 or 4, ‘+++’ for 6 or 9. In statistical analysis, ERα was considered positive with a value of a >2.

Statistical analyses were performed using SPSS 19.0 software (IBM SPSS, Chicago, IL, USA). The χ2-test was used to compare the expression of ERα with various histological types. Linear regression was used to analyze the association between PAX2 and ERα in ovarian serous tumor types. P<0.05 was considered to indicate a statistically significant difference.

Expression levels of PAX2 and ERα in ovarian serous tumors.

Expression levels of PAX2 and ERα in ovarian mucinous tumors.

In our previous study, it was demonstrated that the expression of PAX2 was restricted to all 58 ovarian serous tumor types (Table I). By contrast, only one sample was positive in 68 mucinous tumors from the same patients (Table II) (9).

Correlation between the expression levels of PAX2 and ERα

No doubt estrogens are significant in the development, growth, invasion and metastasis of breast, ovarian and endometrial cancer. O'Donnell et al (12) identified that estrogen-driven growth of epithelial ovarian carcinoma is mediated by the activation of ERα-, but not ERβ-mediated transcription. Hu et al (13) found that the mRNA and protein expression levels of ERα increased in ovarian carcinoma compared with normal ovarian tissues. Estrogen stimulates the growth of ovarian tumor cell lines by ERα (14). In the present study, the expression of ERα observed in borderline cystadenomas and carcinomas were significantly higher compared with cystadenomas in ovarian serous tumors, which indirectly confirmed the results of previous studies (12–14).

Previously a few results indicated that PAX2 was activated by estradiol via ERα in breast and endometrial cancer. Beauchemin et al (7) concluded from their study that PAX2 may serve a novel role in the maintenance of a low invasive behavior in luminal breast cancer cells upon exposure to estradiol, and the overexpression and activation of PAX2 in these cells was sufficient to reduce their invasive ability (7). Hurtado et al (15) suggested that endocrine resistance in breast cancer may results due to PAX2 being a crucial mediator of ER repression of Avian erythroblastic leukemia viral oncogene homolog (ERBB)2 by the anti-cancer drug tamoxifen. PAX2 silencing was able to abrogate the inhibition of ERBB2 transcription and increases ERBB2-dependent cell proliferation (15). Additionally, a previous study determined that PAX2 was a downstream target of ERα in endometrial cells, and PAX2 was a common target of estrogen- and tamoxifen (ER agonist)-bound ERα and may promote the growth of endometrial cancer cells (8).

In addition, ERα is used as a therapeutic target for target organs of endocrine hormone. Tamoxifen is a selective estrogen receptor modulator with anti-estrogenic activity in the breast. As adjuvant hormone therapy, it has a clear beneficial effect in patients with breast cancer. However, tamoxifen shows partial estrogenic activity in the uterus and its use has been associated with an increased incidence of endometrial cancer (16).

The present study was supported by the Clinical Research Fund Project of Zhejiang Province (no. 2013CYC-A77) 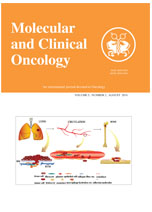