Infections are one of the most common causes of severe neonatal diseases and the leading cause of neonatal death. Although respiratory viral infections are widespread, they are still not recognized as the predominant causes of neonatal deaths. Adenovirus infection is uncommon during the neonatal period, and it frequently has a fatal outcome. Furthermore, it is difficult to distinguish from other common bacterial and respiratory viral infections. The present study reports the case of a 15‑day‑old newborn who presented with coagulation disorders and hypoxemia in September, 2020. Human adenovirus of species D‑53 (HAdV‑D53) was detected in the blood and sputum. Severe pneumonia rapidly progressed to multiple organ failure syndrome and the patient succumbed to the disease, despite receiving extracorporeal membrane oxygenation.

The present study describes the case of a fatal adenovirus infection in a neonate with coagulation disorders and hypoxemia, that rapidly progressed to multiple organ failure syndrome. Th patient succumbed to the disease despite receiving extracorporeal supportive treatment.

A 15-day-old full-term male infant was admitted to a local maternity hospital with fever and anorexia. The neonate was born vaginally at 40(+2) weeks of gestation. The birth weight was 3,300 g. The Apgar score yielded a score of 9 in 1 min and a score of 10 in 5 min. The infant's mother was 27 years old, gravida 2, para 2. The infant was in a good physical condition until 8 days prior to hospital admission. Following a physical examination and clinical analysis, he was diagnosed with pneumonia and received oxygen supplementation, intravenous maintenance fluids, ceftriaxone, clarithromycin and nebulization therapy. The patient was transferred to another hospital, where he was intubated and mechanically ventilated, for increased respiratory distress and a poor response to treatment. However, his general condition continued to deteriorate, and the respiratory distress worsened. He remained on high frequency oscillatory ventilation (HFOV) with a mean airway pressure (MAP) of 17 cmH2O, and the fraction of inspired oxygen (FiO2) was increased up to 1.0 to maintain pulse blood oxygen saturation (SpO2) >85-88%. A chest radiograph revealed exacerbated pneumonia. The patient was in a poor condition and was transferred to the Children's Hospital of Soochow University.

Upon arrival to the neonatal intensive care unit (NICU), Children's Hospital of Soochow University, his SpO2 was 80-85% on HFOV ventilation, with a MAP of 20 cmH2O and FiO2 of 1.0. The laboratory analyses revealed a white blood cell count of 8.00x109/l (neutrophils, 59.8%), a hemoglobin count of 109 g/l, platelet count of 106x109/l and c-reactive protein levels of 6.11 mg/l; the prothrombin time (PT) and activated partial thromboplastin time (APTT) were >170 and 112.5 seconds, respectively. The D-dimer levels were 3470 µg/l, and the infant tested negative for blood culture, TORCH, influenza, parainfluenza, respiratory syncytial virus, syphilis and mycoplasma antibodies. However, the infant tested positive for adenovirus in sputum. Further analyses revealed glutamic pyruvic transaminase levels of 213 U/l, glutamic-oxalacetic transaminase levels of 1147 U/l, bilirubin levels of 20.7 µmol/l, direct bilirubin levels of 17.3 µmol/l, creatinine levels of 28.8 µmol/l, urea nitrogen levels of 1.49 mmol/l and N-terminal-pro-B-brain natriuretic peptide levels of >35,000 pg/ml. The humoral immune indices were as follows: Complement C3, 0.61 g/l; complement C4, 0.07 g/l; IgA, 0.95 g/l; IgG, 11.53 g/l; and IgM, 1.3 g/l. The cellular immune indices were: CD3+ cells, 76.5%; CD4+ cells, 52.3%; CD8+ cells, 23.3%; CD4+/CD8+ cells, 2.2%; CD19+ and CD23+ cells, 1.9%. After 1 day, the patient continued to have low oxygen saturation levels. His oxygenation index was 95 (MAP x FiO2 x100/PaO2), which lasted for >4, and MAP increased to 30 cmH2O. At 3 days following his hospital admission, extracorporeal membrane oxygenation (ECMO) was administered (Fig. 1A). The patient was placed on veno-arterial ECMO to comply with a lung protective ventilation strategy and prevent the progression of pneumomediastinum. The medical practitioner inserted a 14F drainage cannula into the right internal jugular vein and an 8F return cannula into the right common carotid artery. Following cannulation, the blood flow of ECMO was titrated to 0.48 l/min to achieve optimal gas exchange (Fig. 1B). The patient received heparin for anticoagulation, maintaining the activated clotting time between 180-220 sec and the APTT between 60-80 sec. The ultra-protective strategy was used for mechanical ventilation using the pressure control ventilation model with a peak inspiratory pressure of 15 cmH2O, positive end expiratory pressure of 4 cmH2O, a respiratory rate of 15/min and a FiO2 of 30%. The patient's respiratory function and coagulation function progressively deteriorated. Diagnostic bronchoscopy with broncho-alveolar lavage fluid collection was performed on day 3 of ECMO, and adenovirus was identified. Peritoneal dialysis was performed on day 3 of ECMO, following which the patient experienced hypotension and oliguria. During this period, the patient was administered a large dose of noradrenaline (0.5 µg/kg/min) and anti-inflammatory drugs (methylprednisolone, 3 mg/kg/day). Bilateral closed thoracic drainage was performed on day 5 of ECMO, following pleural effusion. Diagnostic bronchoscopy was repeated on day 7 of ECMO which revealed bronchitis, blocked bronchi, and atelectasis. The coagulation function worsened, and the patient developed gastrointestinal bleeding and respiratory hemorrhage. Moreover, there was no notable improvement in the pulmonary symptoms. A cranial ultrasonography suggested massive intracranial hemorrhage (Fig. 2), and the patient succumbed after 11 days of ECMO.

With continuous developments in the field of perinatal medicine, a variety of anti-infective drugs have been used, and notable progress has been made in the treatment of infectious diseases. Pneumonia remains the leading cause of mortality in infants, and distinguishing the pathogenic microorganisms at an early is a difficult task (5). The present study describes the clinical case of a neonate who received antimicrobial and ECMO therapy for respiratory distress syndrome. Subsequently, the patient was diagnosed with adenoviral infection based on blood and sputum sample analyses. The patient's clinical status continuously deteriorated, ultimately resulting in death following 11 days of ECMO treatment.

Neonatal adenovirus infection is uncommon, and the mortality rate of severe adenovirus disseminated infection in neonates is almost 67% (6). The lack of specific symptoms, early identification and effective treatment strategies all contribute to the high mortality rate and fatal outcome in the majority of cases.

The main clinical manifestations of adenovirus infection are similar to those of respiratory tract infections caused by a variety of other pathogens (7,8). Due to the lack of specific clinical features, the early diagnosis of neonatal adenovirus infection is difficult. The majority of these patients present with dyspnea and coagulation disorders, and rectifying hypoxemic respiratory failure may be difficult. Some patients develop refractory hypoxemia despite intubation and treatment with invasive mechanical ventilation.

Respiratory viral infections in the NICU remain under-recognized, Common viruses that cause neonatal respiratory diseases include respiratory syncytial virus, parainfluenza virus, influenza virus, rhinoviruses, varicella virus, coronavirus and human metapneumovirus. To date, a routine test for detecting viruses is not available in the NICU due to the following reasons: i) The clinical symptoms and signs of viral infections are non-specific and overlap with other conditions of critically ill neonates; ii) laboratory examinations to confirm viral infection is difficult; and iii) effective treatment interventions are lacking (9).

Adenovirus is a non-enveloped double-stranded deoxyribonucleic acid virus. In total, there are 55 serotypes of adenovirus that are sub-divided into seven species (A to G), which may cause disease in humans. Types 3 and 7 are the most common pathogens causing pneumonia (11), and the majority of these infections occur in infants <2 years of age, typically resulting in gastrointestinal and respiratory tract manifestations. The adenovirus strain is easily isolated from nasopharyngeal secretions. In the present study, human adenovirus of species D-53 (HAdV-D53) was identified from bronchoalveolar lavage fluid and blood in this patient. HAdV-D53 is known as the cause of epidemic acute conjunctivitis (12). In addition, in the present study, HAdV-D53 was also found in the breast milk of the patient's mother; furthermore, the medical worker also had severe acute conjunctivitis during the treatment period for this patient. It is considered that the virus is highly pathogenic and infectious.

ECMO has been applied more widely in the treatment of critically ill patients with respiratory and circulatory failure with the implementation of the pulmonary protective ventilation strategy (13). The success rate of treatment with ECMO is higher in children, particularly for neonatal respiratory diseases (14). Although the use of ECMO in patients with severe respiratory failure has been shown to lead to improved outcomes (15), there are very few cases in which ECMO therapy was administered for severe adenovirus pneumonia in neonates with poor coagulation function. ECMO in patients with refractory hypoxemia caused by adenovirus may increase the risk of bleeding due to the need of anticoagulation for circuit patency. Bleeding is considered one of the most severe complications of ECMO; thus, its use should perhaps be avoided as much as possible by pediatricians. However, the patient described herein presented with coagulation disorders at the beginning of ECMO, and several efforts were made to maintain clotting function following ECMO. Cranial sonography revealed hemorrhagic tracts in the brain. There is limited evidence or clinical experience available for successful treatment in neonates. Antiviral therapy, such as the use of ribavarin and cidofovir for adenoviral infection have been previously; however, no evident beneficial effect on the clinical status was observed (16,17).

In conclusion, adenovirus pneumonia in neonates is frequently disseminated and fatal, and needs to be differentiated from other conditions, such as sepsis and pneumonia caused by other pathogens. Rapid tests for detecting respiratory viruses are currently available and are crucial in the diagnosis of viral infections in high-risk infants. ECMO may provide an opportunity and time frame for neonates infected with adenovirus though which to improve. However, extrapulmonary complications significantly affect the prognosis.

Funding: The present study was supported by grants from the National Natural Science Foundation of China (grant nos. 81971423 and 81771626).

HW, TP, XL and XZ contributed to the acquisition, analysis and interpretation of the data; they made substantial contributions to the conception and design of the study, and supervised and substantially revised the study. All authors had equal contributions and equal participation in this article. HW and XZ confirm the authenticity of all the raw data. All authors have read and agreed to the published version of the manuscript.

The present study was reviewed and approved by the Ethics Committee of the Children's Hospital of Soochow University (Suzhou, China). Written informed consent was obtained from the parents of the patient.

Written informed consent was obtained from the parents of the patient for the publication of the present case report and the accompanying images. A copy of the signed consent form is available for review by the editor of this journal. 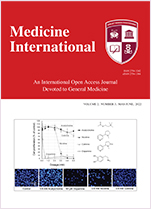