Hepatic fibrosis (HF) is an important health condition linked to chronic liver injury and HF is a disease associated with high morbidity (1). HF is a pathological process involving structural or functional abnormalities of the liver mainly attributed to the excessive accumulation of extracellular matrix components in hepatic tissues, which can lead to liver cirrhosis and liver cancer (2). The morbidity and mortality of HF-induced liver cirrhosis and liver cancer rank sixth globally and are increasing year-on-year in China (3). Previous studies reported that drugs for liver fibrosis treatment mainly inhibit hepatocyte apoptosis (emricasan) (4) and hepatic stellate cell (HSC) activation (PRI-724) (5), reduce fibrotic scar evolution and contraction (simtuzumab) (6), and regulate the immune response (cenicriviroc) (7). However, there is currently a lack of effective strategies and drugs to directly treat this disease (8,9). Numerous studies have demonstrated that the initiation and development of HF are primarily elicited by factors including viral infections, alcohol toxins and metabolites (Such as cholesterol). Furthermore, the activation and proliferation of HSCs also serve as key drivers of HF (10,11). HSC activation is a complicated process controlled by multiple molecules and signaling pathways (12), yet its underlying mechanisms remain largely undetermined. Exploring the molecular mechanisms related to the function of HSCs in order to identify new diagnostic and therapeutic molecular targets could be instrumental in developing new possibilities for the treatment of HF.

Long non-coding (lnc)RNAs are a set of non-protein-coding transcripts with a length of over 200 nt (13). A better understanding of HF could support the use of novel concepts and avenues in the targeted therapy of HF (14). A recent study by Zhang et al (15) reported that lnc-Lfar1 was closely associated with HF and modulated the macrophage activation evoked via lipopolysaccharide and IFN-γ to influence the occurrence and development of fibrosis via the NF-κB signaling pathway. Furthermore, Liao et al (16) recently reported that the lncRNA Gpr137b-ps could bind to and impair microRNA (miRNA/miR)-200a-3p causing inhibition of chemokine (C-X-C motif) ligand 14, which may promote the pathological process of HF via alteration of the activation and proliferation of HSCs. A whole-transcriptome sequencing analysis by Gong et al (17) revealed that lncRNA LOC102553417 (Genbank ID: XR_595047) was expressed at a high level in a rat carbon tetrachloride-induced HF model. LOC102553417 is a lncRNA of rats, which can be queried through the UCSC database (genome-asia.ucsc.edu). However, the role of LOC102553417 in the occurrence and development of HF remains undetermined. In the present study, LOC102553417 silencing was used to investigate its role in HSC activation via the miR-30e/metadherin (MTDH) axis. An in-depth understanding of the functions and mechanisms of LOC102553417 in HF could provide a theoretical basis for the clinical use of LOC102553417 as a diagnostic biomarker and treatment for HF.

The LOC102553417 silencing lentiviral vector (vector no. GV492) was constructed by Guangzhou Anernor Biotechnology Co., Ltd. Briefly, GV492 plasmid vector (100 nM) and packaging plasmid (psPaX2; third generation lentiviral packaging system (vector: packaging vector: envelope ratio, 10:3:1; Promega Corporation) were mixed with lipo3000 (L3000-015; Invitrogen; Thermo Fisher Scientific, Inc.) were co-transfected into 1×106 293T cells (Cell Bank of the Chinese Academy of Sciences). When 293T cells were cultured for 4 days, the cell supernatant was collected, and then the collected cell supernatant was centrifuged at 251.55 × g for 5 min at 4°C, and the supernatant was filtered with a 0.22 µm membrane. The targeting sequences used for the knockdowns (KDs) and negative control (NC, non-targeting.) were as follows: KD1, 5′-GACCCTGCATCAGAGTCTTCCAGA-3′; KD2, 5′-GGACTCTTCCTGGACTACCATAAAT-3′; KD3, 5′-CATACATGCTAGGGCAGCCATTGCA-3′; and NC, 5′-TTCTCCGAACGTGTCACGT-3′. HSC-T6 cells were transduced at 37°C (multiplicity of infection, 30) for 96 h and green fluorescence was observed via fluorescence microscopy to demonstrate transduction (data not shown). LOC102553417 expression was determined via reverse transcription-quantitative (RT-q)PCR. The vector with the highest silencing efficiency was used for subsequent experimentation at 24 h post-transduction.

TRIzol® reagent (cat. no. 15596-026; Invitrogen; Thermo Fisher Scientific, Inc.) was used to extract total cellular RNA. RT-PCR was performed using an RT-PCR kit (cat. no. RT-02011; Chengdu Foregene Biotechnology Co., Ltd.), which consisted of 10 µl SYBR-Green Mix, 2 µl forward (F) primer, 2 µl reverse (R) primer, 1 µl cDNA and 5 µl RNase-free deionized water. After the purity and concentration tests, RNA was reverse transcribed into cDNA (70°C, 5 min; 42°C, 60 min; 70°C, 10 min). Primer Premier 5.0 software (Premier, Inc.) was employed for primer design; each primer was composed of 20–22 bases and the product size was 70–200 bp. The reaction conditions were set as follows: Pre-denaturation for 15 sec at 95°C; 40 cycles of denaturation for 5 sec at 95°C, annealing and extension at 60°C for 30 sec; and for the melting curve, amplification at 55–95°C for 10 sec (81 cycles in total). Three parallel wells were used for each group with a blank control and a NC group at the same time. After determining the cycle threshold, the relative expression of the target gene normalized to the internal control(GAPDH was used for lncRNA and mRNA, U6 was used for miRNA) was calculated using 2−ΔΔCq analysis (18). The primer sequences were synthesized by Sangon Biotech Co., Ltd. as follows: LOC102553417 (F), AGTCCTGCCCACACTGCTTTT; LOC102553417 (R), AACAGAGGCCTGAAATAGAC; MTDH (F), AGCGGGAGGAGGTGACCCCGCC; MTDH (R), ATTTGGTTTGGGCTTTTCA; miR-30e-RT, GTCGTATCCAGTGCAGGGTCCG AGGTATTCGCACTGGATACGACCTTCCAGT; miR-30e (F), GCCGAGTGTAAACATCCT; miR-30e (R), GTCGTATCCAGTGCGAATAC; GAPDH (F), TGTGAACGGATTTGGCCGTA; GAPDH (R), GATGGTGATGGGTTTCCCGT; U6 (F), CTCGCTTCGGCAGCACA; and U6 (R), AACGCTTCACGAATTTGCGT.

HSC-T6 cell suspension was prepared and seeded onto a 96-well plate (100 µl/well) at 1×103 cells/well with three parallel wells for each group. On each of 5 consecutive days, 10 µl CCK-8 reagent (cat. no. FC101-03; TransGen Biotech Co., Ltd.) was added to each well. Following incubation in 37°C and 5% CO2 incubator for 2 h, absorbance was quantified at 450 nm using an ELx800 Absorbance Microplate Reader (BioTek Instruments Inc.).

HSC-T6 cells were transferred directly into a 10-ml centrifuge tube at 106/ml cells per sample, total 1ml. Following centrifugation at 200 × g for 5 min, the supernatant was discarded. Subsequently, cells (100 µl) were suspended in a 5 ml flow tube and incubated with 5 µl Annexin V-PE and 5 µl PI (cat. no. 640914; Biolegend, Inc.) at ambient temperature for 15 min. The samples were then loaded onto a CytoFLEX Flow Cytometer (Beckman Coulter, Inc.) for apoptosis analysis with FlowJo Software V10 (FlowJo, LLC).

According to the manufacturer's instructions of RIP kit (cat. no. Bes5101; Guangzhou Boxin Biotechnology Co., Ltd.), RIP buffer and Argonaute RNA-induced silencing complex catalytic component 2 (Ago2) antibodies 3ug (cat. no. ab233727; Abcam) were equilibrated at ambient temperature for 10 min. The harvested HSC-T6 cells were lysed with RIP lysis buffer at 4°C for 10 min, washed with 2 ml PBS and centrifuged at 200 × g for 5 min at room temperature to collect cell lysate. The cell lysate (100 µl) was incubated with RIP buffer (900 µl) containing antibody-labeled A + G magnetic beads (20 µl) at 4°C for 16 h (overnight). IgG (cat. no. ab172730; Abcam) served as a NC and the supernatant was harvested as ‘Input’ as a control. The immunoprecipitated complex was isolated and detached with 150 µl proteinase K buffer to isolate the RNA at 55°C for 1 h. RT-qPCR was employed to analyze the relative expression of miR-30e and LOC102553417 as aforementioned.

HF is a dynamic process that manifests through extracellular matrix accumulation triggered by chronic liver injury of any etiology, including viral infection, alcoholic liver disease and nonalcoholic steatohepatitis (12). Activation of HSCs is a crucial event in HF, and their proliferation and apoptosis are highly relevant to the initiation and development of HF (20). Previous studies have reported that the proliferation of HSCs can drive the initiation of HF and stimulating HSC apoptosis could ameliorate HF (21,22). The present study demonstrated that silencing LOC102553417 contributed to the significant suppression of HSC-T6 cell proliferation and the significant enhancement of their apoptotic rate. Therefore, it could be hypothesized that LOC102553417 may be a driver of HF, which agrees with a previous finding that LOC102553417 was highly expressed in a rat model of HF (17), and that targeting LOC102553417 could be a potential strategy to treat HF.

The gene encoding MTDH is located on the long arm of human chromosome 8 (8q22) in region 22, with a molecular weight of ~64 kDa and has previously been reported as an miR-30e-5p target gene (23). MTDH can facilitate hepatocarcinogenesis and cancer progression (24); in addition, abnormal expression of miR-30a-5p can impede the proliferative function of liver cancer cells and enhance their apoptosis via targeting of the MTDH/PTEN/AKT pathway (25). MTDH knockout has been shown to impair the proliferation and accelerate the apoptosis of hepatocellular carcinoma cells via the PTEN/AKT pathway (26); however, the significance of MTDH in HF is rarely reported. Previous studies have reported that miR-30e is abnormally expressed in liver injury and hepatocellular carcinoma (27,28). Furthermore, hepatitis B virus X protein may promote the development of liver fibrosis and hepatoma through the downregulation of miR-30e, which targets prolyl 4-hydroxylase subunit α2 (29). Moreover, human antigen R has been reported to be involved in sphingosine 1-phosphate (S1P)-induced bone marrow mesenchymal stem cell migration and can increase the stabilization of S1P receptor 3 mRNA by competing with miR-30e to regulate liver fibrosis (30). The present study demonstrated that LOC102553417 loss-of-function expedited HSC apoptosis by inhibiting MTDH expression through competitively binding to miR-30e, which could be a key mechanism responsible for the action of LOC102553417 on HSCs, which drive HF. The combination of the miR-30e inhibitor and KD-LOC102553417 significantly inhibited apoptosis. The results of the present study demonstrated that the miR-30e inhibitor significantly decreased the apoptotic rate and that silencing of LOC102553417 significantly promoted apoptosis. Furthermore, miR-30e could competitively bind to LOC102553417 and when the miR-30e inhibitor inhibited the expression of miR-30e, thus reducing the binding of miR-30e to LOC102553417, the expression of LOC102553417 was significantly increased and the cell apoptotic rate was significantly reduced. Moreover, miR-30e inhibits LOC102553417 and MTDH expression levels, and expedites the apoptosis of HSCs in which LOC102553417 is knocked down. These results further indicate that the three factors have a mutual regulatory relationship in the apoptosis of hepatic stellate cells.

Notably, the present study has certain limitations. Firstly, the significantly upregulated LOC102553417 expression in clinical HF samples and its clinical significance were not verified. Furthermore, the present study was only performed on rat HSCs and needs to be further explored and verified in human cells and clinical samples. Secondly, an HF cell model was not established to validate the in vivo function and mechanism of LOC102553417. Thirdly, pathway inhibitors were not utilized to verify the downstream pathways of the LOC102553417/miR-30e/MTDH axis; therefore, an in-depth exploration of their interaction is warranted in the future.

In conclusion, the present study demonstrated that silencing LOC102553417 reinforced HSC apoptosis via the miR-30e/MTDH axis, which could be a crucial regulatory mechanism in HF and may provide a theoretical basis for HF-targeted therapy. 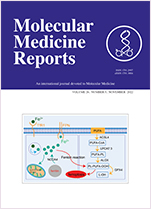