With the development of computed tomogrphy (CT), an increasing number of lung lesions are detected. It has been reported that >50% of resected pulmonary nodular lesions are related to malignancy; therefore, the requirement for rapid and definite diagnoses of lung lesions has been stressed (1)CT-guided needle biopsy has become the dominant method for obtaining tissue samples from lung lesions in order to obtain a pathological diagnosis (2). The procedure is generally regarded as safe, but pneumothorax, hemorrhage and other rare complications may occur. In addition, the reliability of a benign result remains controversial (3). The objective of the current study was to determine the diagnostic accuracy of CT-guided core needle biopsy (CNB) and to retrospectively analyze the correlation between factors and complications of the procedure.

Between January 2009 and June 2010, a CNB was performed on a total of 343 patients with 345 lung lesions in 345 sessions. Among them, two patients received a second CNB, as the size of the tissue sample was not large enough to obtain pathological results. These patients were then followed up for at least two years. The enrolled population consisted of 228 males (66.5%) and 115 females (33.5%). The patient age ranged between 17 and 86 years old (mean age, 60±18.3 years old). The study was approved by the ethics committee of Fudan University (Shanghai, China).

Prior to the procedure, the risks and benefits were explained to each patient and informed consent was obtained. Three interventional physicians, each with >5 years experience of needle biopsies, performed the procedures. All cases were performed using the Philips 64-slice spiral CT (120 kV, 250 mA and a 3-mm thickness; Philips Healthcare, Andover, MA, USA) for imaging guidance. The biopsy tool that was used was an automated biopsy gun (SuperCore™, Angiotech Pharmaceuticals, Inc., Vancouver, BC, Canada) with an 18-gauge needle. The patient lay on the CT table and the puncture point and access routine were determined by CT scan. Following local anesthesia, the needle was inserted through the skin and advanced to the lesion. Intra-operative CT scans were performed to confirm the position of the lesion and needle. Once the needle was located in an appropriate position within or near the lesion, the operator triggered the cannula to close, trapping the specimen in the sample notch. Next, the tissue specimen was removed from the notch and sent to the Department of Pathology (Fudan University, Shanghai, China). Immediately after the procedure, a chest CT scan was performed to evaluate procedural complications, including pneumothorax and hemorrhage. In addition, a chest radiograph was obtained the following morning. The baseline characteristics of the lesions and procedures are summarized in Table I.

Characteristics of lesions and procedures.

Classification of diagnoses and complications

The CNB results were divided into 4 categories: Atypical adenomatous hyperplasia (AAH), malignant, benign and undetermined (3). AAH is a premalignant lesion of lung adenocarcinoma. Although AAH is not ranked as malignant, this category commonly undergoes carcinomatous change.

Final diagnoses were divided into 3 categories: Malignant, benign and undetermined. Malignant tumors were defined by: i) Cancer-associated mortality occurring during the follow-up period; ii) lesions representing complete response, partial response or progressive disease to chemotherapy according to the Response Evaluation Criteria in Solid Tumors (4); and iii) a histopathological examination showing malignant tumor tissue in the specimen received at surgical resection. Benign tumors were defined by: i) Lesions that disappeared or decreased in size with conservative treatment; ii) patient exhibited a positive microbiological conclusion (3,5); or iii) a histopathological examination showing no malignant tumor tissue in the specimen from surgical resection. Undetermined tumors were defined as: i) Lesions treated by radiofrequency ablation or stereotactic irradiation (6); ii) a lesion that was stable in size at follow-up; or iii) a patient that could not be contacted for follow-up (Table II).

Data were analyzed with SPSS 19.0; the χ2 test was used for the statistical analysis. The analysis of pneumothorax and hemorrhage was based on the 345 CNB sessions not the 343 patients. P<0.05 was considered to indicate a statistically significant difference.

In the present study, the overall complication rate was 50.4%. There was a total of 60 (17.5%) cases of pneumothorax in the 343 patients. Among those, 52 (15.2%) were mild, 6 (1.7%) were moderate and 2 (0.6%) were severe. Only 5 (1.5%) required placement of chest tubes. There were 113 (32.9%) cases of hemorrhage in this study. Of those, 78 (22.7%) were mild hemorrhage, 35 (10.2%) were moderate hemorrhage. No severe hemorrhage occurred. One of the patients with moderate hemorrhage complained of chest pain and chest tightness 8 h after the biopsy; the chest radiograph indicated a parenchymal hemorrhage and hemocoagulase was administrated. Another patient developed hypotension with syncope, and resuscitation and hemocoagulase administration improved the individual’s condition. All other hemorrhages were self-limited.

Correlation between factors and pneumothorax.

Correlation between factors and hemorrhage.

In the present study, the incidence of pneumothorax was 17.5%, with 1.5% requiring chest tube drainage. These results are comparable to prior studies (9–11). The decubitus position was found to result in more pneumothoraxes than the supine and prone positions. We hypothesize that the decubitus position separates the parietal and visceral pleura more than the other positions and therefore, air is more likely to enter the pleural cavity as the needle is taken out. Moreover, the majority of lung lesions were found to be located in the middle or inner zone of the lung in the present study. In the biopsy of lesions located in the middle or inner zone of the lung, it is more difficult to keep away from the interlobar pleural; if it is damged, it is more likely to result in pneumothorax. O’Neill et al(12) reported that rapidly (within 10 sec) rolling the patient over to the biopsy-side-down position following needle-out reduced the rate of overall pneumothorax and pneumothorax necessitating a drainage catheter. Moreover, smoking, the decubitus position and a longer length needle in the normal parenchyma were risk factors for a pneumothorax. It is generally considered that a pneumothorax is the most common complication of a needle biopsy of the lung (11,13). However, in the present study, the incidence of hemorrhage (32.9%) was higher than pneumothorax (17.5%) and also higher than the 1–27% reported in the literature (7,11,14). This may be since a pneumothorax is easier to identify in chest radiographs and its obvious symptoms are apt to attract notice. By contrast, mild hemorrhage is difficult to identify in chest radiographs. Furthermore, the current data was based on the presence of haziness on CT images and hemoptysis, instead of hemoptysis only. The results showed that a small diameter and longer length of the needle in the normal parenchyma and more frequent adjustments of the needle were poor predictive factors of hemorrhage.

With regard to pathological yield, in the present study, the false positive and false negative rates and the PPV and NPV were 0, 2.7, 100 and 87.7%, respectively. When a malignant diagnosis is identified by needle biopsy, the clinical decision-making process is generally straightforward due to the extremely low false-positive rates (0.0–1%) (3,15). However, when a benign diagnosis is obtained, there is clinical uncertainty over how to proceed, as a number of these lesions may prove to be malignant (false negatives). Previous studies have evaluated the outcomes following a benign biopsy and have found false negative rates that vary widely (2–54%) (16–18). Combining the results of the present and relevant previous studies, we recommend that patients with benign CNB diagnoses undergo repeat imaging for ≥2 years to document the stability or resolution of the lesions. If the nodule grows, a repeat biopsy (19–21) or resection (22) may be required to obtain a definitive diagnosis.

The main limitations of the present study were as follows: Firstly, in the analysis of the correlation between factors and complications, single factors were considered individually without excluding the affect of other factors. Secondly, a small number of patients were lost for follow-up and a two-year follow-up may not have been sufficient.

This study was supported by grants from the Science Technology Commission of Shanghai Municipality (nos. 0952nm03400 and 11nm0504000). 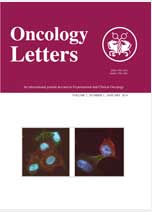