The aim of the present retrospective study was to ascertain the significance of pathological complete response (pCR) on overall survival (OS) and disease‑free survival (DFS) in each disease subtype of operable breast cancer. Using a single‑institution database, 90 patients were identified, who received neoadjuvant chemotherapy (NAC) for operable breast cancer and were eligible for the analysis. In total, 10 patients (11.1%) had succumbed to their diseases and 20 (22.2%) had succumbed to their diseases or exhibited recurrences. The OS of patients with triple‑negative (TN) tumors was significantly lower than that of patients with other disease subtypes (P=0.016). The DFS of patients with luminal tumors was higher than that of patients with other subtypes. Survival was improved with pCR following NAC (P=0.044). Across all subtypes, patients who achieved pCR exhibited a higher DFS than patients who did not, but not significantly. pCR only improved OS and DFS in the TN disease subtype (P=0.022 and P=0.048, respectively). pCR following NAC may have prognostic value in TN breast cancer.

Pathological complete response (pCR) to neoadjuvant chemotherapy (NAC) for breast cancer is a significant predictor of overall survival (OS) and disease-free survival (DFS) (1–3). However, Ring et al previously reported that pCR improves prognosis in patients with estrogen receptor (ER)-negative tumors, but not in patients with ER-positive tumors (4). In addition, Fasching et al reported that patients with human epidermal growth factor receptor 2 (HER2)-negative disease have a more favorable prognosis when pCR is achieved, despite the marked proliferation potential of these tumors based on Ki-67 staining (5). von Minckwitz et al reported that pCR is a suitable surrogate endpoint in the luminal B/HER2-negative, HER2-positive (non-luminal) and triple-negative (TN) subtypes, but not in the luminal B/HER2-positive or luminal A subtypes. No correlation was observed between pCR and prognosis in ER-positive tumors, including luminal A tumors (6). Although the authors reported that pCR has prognostic value in intrinsic subtypes, the study combined patients who had received various chemotherapeutic regimens.

We previously reported the effect of NAC with FEC100 (fluorouracil/doxorubicin/cyclophosphamide) followed by weekly paclitaxel treatment, which is the standard regimen at Osaka City University Graduate School of Medicine (Osaka, Japan) (7). This regimen reaches a pCR rate of 38.9%. The addition of trastuzumab increases the pCR rate when HER2-positive patients are treated with sequential neoadjuvant paclitaxel and FEC chemotherapy (66.7%) (8). The objective of the present retrospective study was to assess the impact of the pCR achieved by this effective regimen in each subtype of breast cancer.

In total, 90 females with histologically confirmed invasive ductal carcinoma of the breast and stage IIA to IIIA disease were included. All patients received NAC as initial treatment at our institution between November 2005 and February 2010. For each patient, the histological diagnosis was determined by core needle biopsy of the tumor. ER, progesterone receptor (PgR) and HER2 overexpression were evaluated in biopsy specimens prior to treatment.

Surgery (total or partial mastectomy with axillary lymph node dissection or sentinel node biopsy) was scheduled 3–6 weeks following the completion of NAC. All patients treated with partial mastectomy received postoperative whole breast irradiation; medial and lateral tangent fields with a total dose of 50 Gy divided into 25 fractions. In cases of close margins, the tumor bed was treated with an additional 10 Gy in five fractions with an electron beam. Regional nodal irradiation to the supraclavicular and chest wall was used in patients who received mastectomy with four or more positive lymph nodes.

Surgical specimens were fixed in buffered formalin and sectioned into 5-mm-thick slices to prepare paraffin-embedded blocks. The specimens were examined by pathologists following conventional hematoxylin/eosin staining. Pathological observations were evaluated in accordance with the 16th edition of the General Rules for Clinical and Pathological Recording of Breast Cancer from the Japan Breast Cancer Society (9). pCR was defined as no evidence of residual invasive cancer in the breasts and lymph nodes, including in patients with non-invasive or in situ cancer and in patients whom no residual cancer cells were identified.

All tumors were assessed for ER and PgR expression by IHC. Patients were classified as having ER- and/or PgR-positive tumors when >10% of cancer cells showed positive staining by IHC. HER2/neu expression was also assessed by IHC according to the 2007 ASCO/CAP Guidelines (10); if the IHC score was 3+, the specimen was considered to exhibit HER2 overexpression and if the score was 2+, FISH was performed to confirm gene amplification (>2.2-fold increase in fluorescence compared with that in the centromere).

Patients were examined following each cycle of chemotherapy to evaluate clinical responses and adverse events. Following surgery or radiotherapy, patients visited every 3 months for 2 years, then every 3–6 months for the next 3 years. Beyond 5 years, patients were assessed annually by physical examination, mammography, ultrasonography, contrast-enhanced computed tomography and bone scan.

The correlation between each baseline clinical variable and the probability of achieving pCR was tested by univariate analysis using the χ2 or Fisher’s exact tests. The independent significance of each variable was assessed by multivariate logistic regression analysis using a step-up procedure. The odds ratios of pCR were calculated from the final model. OS and DFS were measured between the date of the surgery and mortality or recurrence, respectively; mortalities without recurrence were censored in the DFS analysis. Survival curves were calculated by the Kaplan-Meier method and differences were assessed by the log-rank test. SPSS 19.0 (SPSS, Inc., Chicago, IL, USA) was used for all statistical analyses. P<0.05 was considered to indicate a statistically significant difference.

Individual clinical variables are shown in Table I. Between November 2005 and February 2010, 90 patients at our institute received surgery following NAC. The age of the patients ranged between 26 and 71 years (median, 53 years) and the tumor sizes ranged between 15 and 60 mm (median, 30 mm). Follow-up time ranged from 8 to 83 months (median, 53 months) and clinical stages prior to NAC ranged from 2A to 3A.

pCR was observed in 38 of the 90 (42%) patients. By univariate analysis, T1 (P=0.013), ER-negative status (P=0.028) and PgR-negative (P=0.029) status were found to significantly correlate with pCR. In addition, tumor subtype was found to significantly correlate with pCR (P=0.049). Axillary lymph node involvement was associated with pCR, but the association did not reach statistical significance (P=0.058). Differences in pCR according to HER2 status and age were not statistically significant.

HER2 subtype and DFS events in four cases.

A higher pCR rate was previously observed when breast cancer patients with ER- and PgR-negative tumors received NAC (11–15). In HER2-positive cases, NAC was more effective than in other cases due to the standard concurrent use of trastuzumab (12–16). In the present study, relatively high pCR rates were achieved among all disease subtypes. The 31% pCR rate observed in the luminal subtype was markedly higher than that in previous studies. Since pretreatment histological grade and Ki-67 index were not assessed in the current study, the luminal A subtype was not accurately distinguished from the luminal B subtype. Therefore, the high pCR rate observed in ER-positive tumors may be explained by the possibility that the majority of the patients in this subgroup exhibited luminal B tumors.

pCR is generally considered a predictor of OS and DFS. In the present study, pCR following NAC significantly improved OS, but not DFS. The lack of correlation between pCR and DFS may be due to the small size of the study population and since two patients with brain metastasis and one patient who committed suicide were among the patients who achieved pCR. Without the latter three cases, pCR is likely to have been a significant predictor of DFS.

pCR significantly improved OS and DFS only in patients with TN breast cancer. In the luminal subtype, pCR was found to correlate with good prognosis, but the correlation was not statistically significant, possibly due to the small number of events. In the HER2 subtype, NAC was extremely effective, achieving 100% response and 67% pCR rates. In addition, all patients in that subgroup were recurrence-free, with the exception of patients with brain metastasis to whom chemotherapeutic agents and antibodies were not administered. Consequently, HER2-positive patients who received NAC exhibited a good prognosis regardless of whether the patients achieved pCR. In addition, the prognosis of HER2-positive patients who developed brain metastasis may be improved than that of HER2-negative patients (21). Whole brain radiation therapy (WBRT) is a mainstay of treatment for brain metastasis. However, the deterioration of cognitive function due to late radiation toxicity following WBRT is an important issue among long-term survivors (22). If brain metastases are few and small, stereotactic radiotherapy, which is less invasive and more effective than WBRT, may be elected (23). Therefore, further discussion of routine brain screening following surgery, particularly in HER2-positive patients, is required.

Since the design of the current study was retrospective and included a small number of patients, results must be interpreted with caution. Prospective studies incorporating large numbers of patients and longer follow-up periods are required to assess the prognostic value of pCR in patients with initial unfavorable prognoses and to define appropriate therapeutic strategies.

In patients with luminal tumors and HER2-positive tumors, pCR was not useful as a surrogate marker of OS or DFS; other surrogate markers may exist in this subtype since prognosis was affected by hormone and anti-HER2 therapy. In patients with TN tumors, the degree of pathological response following NAC may highlight important prognostic information, as chemotherapy was the only effective therapy for that disease subtype. 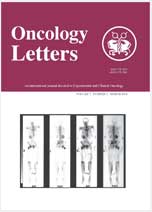