Immediate breast reconstruction following mastectomy is an effective treatment for breast cancer patients. Among several implant options, a latissimus dorsi myocutaneous (LDM) flap is used mainly due to the ease and minimal invasiveness of the procedure. The role of sentinel lymph node (SLN) biopsy with total mastectomy is evolving. Since SLN biopsy is not included in health insurance coverage in the treatment of patients in Japan, it is not generally performed as a separate procedure due to its cost. The present study reviewed the results of seven patients who underwent initial-staged SLN biopsy followed by planned mastectomy and LDM flap reconstruction. Two patients with positive SLNs showed macrometastases and underwent modified radical mastectomy with immediate reconstruction. In contrast, cases showing negative results for sentinel lymph nodes underwent total mastectomy. There were no false-negative cases among the SLN biopsy-negative cases. When an SLN is found to be positive on final pathology, the patient with reconstruction by LDM flap generally requires a potentially difficult reoperation on the remaining axillary nodes. When initial SLN biopsy is generally performed as a separate procedure in Japan, it will be an effective method for screening the axilla for patients who wish to undergo LDM flap reconstruction.

Immediate breast reconstruction following mastectomy has been used frequently as an effective treatment option for patients with early-stage breast cancer. Current techniques focus on a less radical removal of skin, such as skin-sparing mastectomy (SSM) (1–3), often performed only through a circumareolar keyhole incision (4), or nipple-sparing mastectomy (NSM) (5). Cosmetically, these techniques are extremely effective, as the greater part of the native skin and inframammary fold of the breast are conserved (6). Among the various immediate breast reconstruction methods available, autologous tissue has been accepted as the standard option. Regarding the implant, a latissimus dorsi myocutaneous (LDM) flap is typically used in cases with small breast volume or in women hoping to have a baby, due to the ease and minimal invasiveness of the procedure.

Sentinel lymph node (SLN) biopsy is a common procedure for tumor staging. Furthermore, several studies have validated the effectiveness and safety of the procedure in node-negative patients with no increase in local axillary recurrence or distal metastatic spread when compared to axillary lymph node dissection (7–10). However, SLN biopsy is not performed in all institutions since it has not been included in health insurance coverage in Japan. Nodal involvement is classified into three categories: macrometastasis (diameter >2 mm), micrometastasis (diameter 0.2–2.0 mm) and isolated tumor cells (ITCs) (diameter <0.2 mm). Macrometastases certainly have an effect on patient treatment and should obviously be considered clinically relevant. ITCs are regarded as non-significant in terms of staging and treatment. Conversely, the significance of micrometastases remains unknown, with different studies sometimes reaching contradictory conclusions (11).

Macrometastases can be identified by an intraoperative examination of histological sections at intervals of 2 mm, but such sections may reduce the likelihood of identifying micrometastases. Axillary lymph node dissection (ALND) has been recommended in cases with positive SLNs (12,13), but ALND may be avoided in cases of micrometastases given the risks associated with ALND, including lymphedema, limitations to arm mobility and sensory loss (14–16). Conversely, in patients with immediate autologous flap, particularly LDM flap reconstruction, secondary ALND, following identification of a positive SLN upon permanent histological examination after the initial operation is considered a more difficult procedure. Secondary ALND is a difficult procedure because either reoperation of the reconstructed breast or second surgery through the axillary incision is required, both of which may compromise the blood supply of the pedicle or negatively affect the aesthetic results (17–19).

Between April 2007 and March 2009, seven patients with early breast cancer and a clinically negative axilla underwent SSM/NSM with immediate LDM flap reconstruction and SLN biopsy. No patients were treated with preoperative chemotherapy or hormonal therapy. Breast cancer was diagnosed based on the results of a core needle biopsy. In all cases, SLN biopsy was performed using a combination technique involving the technetium 99m tin colloid (74 MBq) and indigo blue dye, which were injected intracutaneously into the areola. Intraoperatively, sentinel lymph nodes were evaluated by 2-mm serial sections stained with hematoxylin and eosin. Pathological evaluation with permanent sections was performed using hematoxylin and eosin with added immunohistochemical staining in cases of suspected metastasis.

Clinical characteristics of the seven cases.

SSM/NSM followed by immediate breast reconstruction is one approach aiming to achieve the best possible cosmetic result in one procedure and one hospital stay and to minimize the physiological and physical trauma of breast cancer. Moreover, with the advent of SLN biopsy techniques that decrease the risk of complications of ALND, the current approach to breast surgery aims to further minimize tissue loss while obtaining maximal oncological safety. The present study reviewed our experience with SLN biopsy before SSM/NSM followed by immediate LDM flap.

Although SLN biopsy is now standard procedure, it is not performed as a separate procedure due to its cost in all Japanese institutions. In most institutions, intraoperative analysis of the SLN status proceeds to ALND immediately on identification of a positive node. Even though macrometastases can be identified by 2-mm serial sections intraoperatively, micrometastases may be overlooked. The current standard of care is to recommend secondary ALND in patients with positive SLNs which have been identified by a permanent histological examination (12,13). ALND is not always required for cases of micrometastases overlooked by intraoperative examination (14–16), given the significantly decreased risk of finding positive non-SLNs in patients with SLN micrometastases compared with SLN macrometastases and given the unclear local control and prognostic impact between ALND and adjuvant systemic therapy for micrometastases (20–23).

For patients considering total mastectomy with immediate reconstruction, the option of SLN biopsy may create unique problems. Numerous plastic surgical techniques are available for breast reconstruction. Tissue expander with revision to permanent implant is considered the least complex option. Despite the availability of this option, return to the axilla following placement of a synthetic device risks implant damage and infection, necessitating replacement (24). Placement of an expander represents the lowest risk for subsequent return to surgery. The transverse rectus abdominis myocutaneous flap is more technically demanding, but provides autologous tissue replacement of absent breast parenchyma. This procedure requires displacement of abdominal muscle and vascular tissue into the chest area. Using a pedicled approach, the axilla is relatively spared, and return to the axilla is technically feasible. The LDM flap is becoming increasingly popular as a reconstructive technique. This technique involves transposition of muscle from the back to the anterior chest wall and medial fixation near the sternum, preserving native nerve and blood supply (25,26). This may represent the most difficult surgical environment for a return to the axilla, since a reversal of the flap is required during ALND. Fortunately, we encountered no false-negative cases in this study. However, we do not recommend that patients with false-negative results undergo further ALND. Althernative types of therapy such as systemic or radiation are suggested at our institution due to our limited knowledge of the prognostic significance of ALND, complications after ALND and the difficulty of the surgical procedure. When the significance of ALND in cases of micrometastases are clarified by currently ongoing randomized clinical trials of SLN biopsy (27,28), we suggest initial SLN biopsy as a separate procedure in a day surgery under local anesthesia in order to determine whether the appropriate surgery should be modified radical mastectomy or total mastectomy with immediate LDM flap reconstruction. In addition, when breast cancer patients are entitled to SLN biopsy under health insurance coverage in Japan, initial SLN biopsy as a separate procedure will offer a more general approach. 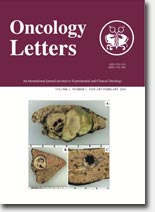