Somatic mutations of isocitrate dehydrogenase (IDH)-1 and IDH2 proteins have been described in gliomas. The mutations target the R132 amino acid residue and the R172 residue in IDH1 and IDH2, respectively. The same mutations were observed in acute myeloid leukemias with normal karyotype, but a new mutation in IDH2 (R140Q substitution) was detected in malignant myeloid diseases and appears to be the most frequent IDH mutation in these pathologies. To the best of our knowledge, no study thus far has reported the presence of this R140Q mutation in IDH2 in tumors of the nervous system and breast cancers. We evaluated IDH1 and IDH2 exon 4 in 48 low-grade gliomas, 58 primary glioblastomas and 94 breast cancers to evaluate the frequency of mutation and investigated the R140Q substitution in IDH2. The results were compared to our recently obtained results in hematopoietic diseases. The frequency of IDH1 and IDH2 mutations in our panel of gliomas was similar to previously reported mutations. No IDH2 R140 mutation was observed. Compared to hematopoietic diseases, the IDH2 R172 mutation was also more rare and IDH1 mutations more prominent in tumors of the nervous system. No IDH1 or IDH2 mutation was detected in the 94 breast cancer samples. Thus, the IDH2 R140 mutation appears to be restricted to hematopoietic diseases.

Somatic mutations of isocitrate dehydrogenase (IDH)-1 and IDH2 proteins have been described in gliomas. The mutations target the R132 amino acid residue in IDH1 and the R172 residue in IDH2, both of which are encoded by the fourth exon of the corresponding gene (1). Mutations of IDH1 are frequent (>80%) in astrocytomas and oligodendrogliomas, whereas they are very rare in primary glioblastomas and other tumors of the nervous system (2,3). IDH2 mutations are rare, but more common in oligodendroglial tumors, as compared to astrocytomas. These mutations are also mutually exclusive with those in IDH1. IDH mutations occur at the substrate binding site and inactivate the standard enzymatic activity (4).

Recently, the same mutations, which are considered to be rare in the majority of common tumors outside gliomas (5,6), were discovered in acute myeloid leukemias (AMLs) with normal karyotype (7,8). In malignant myeloid diseases, a new mutation affecting R140 in IDH2 was detected (9,10). Authors of this study (unpublished data), as well as other investigators (8,9), determined that the R140Q substitution was the most frequent IDH mutation in these pathologies. Thus, mutations of IDH1 and IDH2 were found in 28% of primary AMLs.

Exons 4 of IDH1 and IDH2 were analyzed on panels of DNAs from randomly chosen brain and breast cancer samples. Their sizes were approximately the same as our set of AMLs previously reported (unpublished data). For tumors of the nervous system, the set comprised 48 low-grade gliomas (5 astrocytomas, 22 oligoastrocytomas and 21 oligodendrogliomas) and 58 primary glioblastomas. The breast cancer panel comprised 94 samples, including 60 invasive ductal carcinomas, 7 invasive lobular carcinomas, 4 medullary carcinomas, 5 mixed type, 1 tubular carcinoma, 3 others and 14 not informed.

We investigated whether the IDH2 R140 new mutation was present in tumors of the nervous system and may have been overlooked. We also aimed to determine whether breast cancers exhibited any IDH2 mutation. We determined the sequence of exon 4 of IDH1 and IDH2 genes from the DNA of brain and breast tumor samples.

The frequency of IDH1 and IDH2 mutations in our panel of gliomas is similar to what has previously been reported (2,3). Despite this high frequency, the IDH2 R140 residue was not affected in our series of neural tumors. Compared to hematopoietic diseases, the IDH2 R172 mutation was also more rare and the IDH1 mutations more prominent in tumors of the nervous system (Table I). IDH mutations were completely absent in breast tumors, as previously noted (5,6). However, no previous study investigated the IDH2 mutation in breast cancer. Our study showed that this disease is not associated with the IDH2 mutation. Thus, the IDH2 R140 mutation appears to currently be restricted to hematopoietic diseases. All IDH arginine mutants produce 2-hydroxyglutarate (8,10). The specific role of the R140 mutation in hematopoietic diseases remains to be established, but may be linked to subtle enzymatic differences between allele mutants.

Mutations of IDH1 and IDH2 in four types of human malignant diseases.

a Our data on acute myeloid leukemias are shown for comparison.

This study was supported by Inserm, Institut Paoli-Calmettes and by institutional grants to CRO2. Frozen samples were provided by the AP-HM TumorBank (Authorization no. 2008-70). 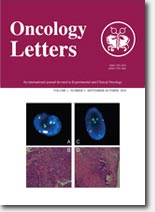