Ulcerative colitis (UC) is a chronic inflammatory bowel disease associated with intestinal inflammation and tissue damage. It is assumed that the oxidative stress that accompanies chronic inflammation contributes to the development of colorectal cancer (CRC). Thioredoxin interacting protein (TXNIP), whose expression is induced by various types of stress including oxidative stress and is downregulated in various types of human cancer including colorectal cancer, is a negative regulator of thioredoxin, which is an important regulator of redox balance. However, TXNIP expression in clinical specimens of UC remains unclear. Herein, using TaqMan RT-PCR assay, we demonstrated that TXNIP expression in UC and CRC colonic mucosa specimens was significantly lower than that in normal tissues (p=0.0007 and p<0.0001, respectively). In addition, in situ hybridization study showed that inflammatory cells expressing the TXNIP transcript were abundant in lymphoid follicles, the lamina propria and submucosa in the colonic mucosa of UC patients, but not in epithelial cells on the flat surface, whereas the TXNIP transcript was abundant in normal mucosa. Our results suggest that downregulation of TXNIP may be partly involved in the pathogenesis of UC, including inflammation and colitis-associated colon carcinogenesis. 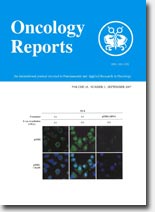