The increase in the amount of solar ultraviolet (UV) light that reaches the earth is considered to be responsible for the worldwide increase in skin cancer. It has been reported that excessive levels of UVA and UVB light have multiple effects, which can be harmful to humans. Experimental measurements were obtained using wide-band solar light YES biometers from 2006 to 2009 in Arica, Chile and from 2003 to 2006 in Valdivia, Chile, both instruments having been calibrated according to the World Health Organization (WHO) criteria and integrated into the Chilean Meteorological Organization network. To explain the possible effect of radiation on skin cancer, revised pathological reports in Arica and Valdivia were analyzed. In Arica, data on men and women were collected between 1997 and 1998-2002, and in Valdivia, between 1997-2000 and 2001-2007. In this study, comparative values of ultraviolet index (UVI) from the above datasets, were analyzed. Arica is a city located in the subtropical zone of northern Chile, 25 meters above sea level, with a latitude of 18˚49'S and a longitude of 70˚19'W. It has a microclimate characterized by stable meteorological conditions throughout the year, including low precipitation (<5 mm per decade), predictable winds, a high percentage of clear sky days and high ground reflectivity due to the presence of light sand. Due to its location near sea level, the population performs a great number of outdoor activities. Valdivia is a city located in the southern part of Chile, 19 meters above sea level with a latitude of 39˚38'S and a longitude of 73˚5'W. The aim of the present study was to determine the relationship between latitude and the risk of skin cancer in two cities with different latitudes. The incidence of skin cancer per 100,000 persons significantly (P<0.05) increased in both genders between the periods 1997-2000 and 2001-2007 in Arica. However, it decreased in men between the periods 1993-1997 and 1998-2002 in Valdivia. The results of this study indicate a steady increase in the incidence of skin cancer in Arica, most probably due to the high levels of UV light and the latitude to which individuals are exposed throughout the year, as well as the accumulative effect of this type of radiation on the skin. It can be concluded that Arica presented a greater UVI than Valdivia, which can explain the high prevalence of skin cancer in this population according to the pathological reports. 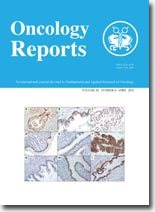