Hepatocellular carcinoma (HCC) is the most common type of liver malignancy, which results in chronic inflammation in the liver (1,2). Typical HCC progression is a multistep process involving transformation, survival, proliferation, invasion, angiogenesis and metastasis (3,4). Although, a number of clinicopathological factors are important in the treatment of HCC, there is no marked and effective medical therapy for patients with advanced HCC (5–8). Therefore, it is necessary to develop more efficient therapeutic strategies and targets for patients with HCC.

Hypoxia-inducible factor-1 (HIF-1), a heterodimer composed of an oxygen-regulated HIF-1α subunit and a HIF-1β subunit, activates the transcription of genes involved in proliferation and angiogenesis (9–11). HIF-1β is stable under hypoxic or normoxic conditions. By contrast, HIF-1α is an oxygen sensitive subunit and its expression is induced under hypoxic conditions (12). The degradation of HIF-1α subunit is facilitated by ubiquitination following the hydroxylation of proline residues (13,14). The other post-transnational modifications, such as acetylation and phosphorylation reactions, can also affect the stability of HIF-1α (15,16). Activated HIF-1 serves a crucial role in the regulation of the expression of certain enzymes in the glycolytic pathway, such as glucose transporters, hexokinase, phosphofructokinase, pyruvate kinase and pyruvate dehydrogenase (17–19). Vascular endothelial growth factor (VEGF), one of the most important angiogenic factors in cancer progression, is a HIF-1α target gene. VEGF has also been revealed to regulate cancer cell proliferation and migration (20).

LOX-like protein 2 (LOXL2) is a member of the lysyl oxidase gene family, with both intracellular and extracellular functions (28,29). Extracellularly, LOXL2 catalyzes the covalent cross-linkages of collagen and elastin in the extracellular matrix. Intracellularly, LOXL2 modifies histone tails and reduces cell polarity, which increases the metastatic potential of tumors (30–32). Intracellular LOXL2 has also been revealed to stabilize Snail protein and promote EMT in certain breast cancer cell lines through interaction with Snail (33). Thus, small molecule LOXL2 inhibitors were considered as suitable drug candidates for treatment of numerous types of cancers. LOXL2-IN-1 hydrochloride (LOXL2-IN-1) is the first published small molecule inhibitor selective for LOXL2 with a strong inhibitory effect (32). The most established LOXL2 inhibitor is β-aminoproprionitrile (BAPN), which irreversibly inhibits the enzyme activity of LOXL2 (34). Recently, a subseries of LOXL2 specific inhibitors containing an aminomethiophene (AMT) scaffold were revealed to inhibit tumor growth (35–37).

The present study demonstrated that LOXL2 upregulated HIF-1α/VEGF signaling pathways via the Snail-FBP1 axis, and this phenomenon could be inhibited by LOXL2 inhibition. LOXL2 represents a potential therapeutic target for HCC. These findings further support the role of LOXL2 in the progression of HCC and implicates LOXL2 as a potential therapeutic agent for the treatment of HCC.

293T cells (2×106/cell culture dish) were plated and transfected with different lentiviral vectors together with packaging plasmids using Lipofectamine 2000 (Invitrogen; Thermo Fisher Scientific, Inc.). After 48 h of transfection, culture supernatants were harvested and filtered with a Millipore Stericup filter (0.45-µm). Huh7 or Hep3B cells were infected with different lentivirus for 24 h. After 4 days, the effects on these cells were examined by western blotting.

Total RNA was isolated from Huh7 cells by TRIzol (Invitrogen; Thermo Fisher Scientific, Inc.). The purity and quantity of RNA were assessed with a NanoDrop 100 spectrophotometer (Thermo Fisher Scientific, Inc.). cDNA was synthesized with a reverse transcriptase kit (Thermo Fisher Scientific, Inc.). SYBR-Green (Takara Biotechnology Co., Ltd.) was added to quantify the expression of VEGF, according to the protocol provided. The sequences of the primers were: VEGF, 5′-TTGCAGATGTGACAAGCCGA-3′ and 5′-GGCCGCGGTGTGTCTA-3′; GAPDH, 5′-GCACCGTCAAGGCTGAGAAC-3′ and 5′-TGGTGAAGACGCCAGTGGA-3′. PCR reaction conditions were performed as follows: 95°C for 60 sec, and 40 cycles of 95°C for 15 sec, 60°C for 15 sec, and 72°C for 45 sec. The relative expression levels were determined using the comparative ΔΔCq method (38).

The different types of HCC cells were seeded at a density of 300 cells/well in 6-well plates and cultured for 14 days. The culture medium was replaced every 3 days. Colonies were fixed with 10% buffered formalin at 37°C for 15 min and stained with 2% crystal violet at 37°C for 30 min. Colonies were counted under a microscope (Micropublisher 3.3RTV; Olympus Corporation), and colony forming was determined as the colony formation rate (number of cell clones experimental group/cell clones in the control group ×100%).

To analyze the expression of proteins, western blot analysis was performed. Total protein was isolated from the cells using RIPA buffer containing a protease and phosphatase inhibitor cocktail (Thermo Fisher Scientific, Inc.). The lysate was centrifuged at 20,8000 × g for 15 min at 4°C. The supernatants were collected and mixed with 5X loading buffer, followed by incubation in a boiling water bath for 5 min. Protein concentration was determined by Bradford protein assay. Western blot analysis was performed using 12% SDS-PAGE gels for different proteins (50 µg per lane). Following transfer to PVDF membranes, 5% non-fat milk in TBST was used for blocking for 1 h at room temperature, followed by incubation overnight at 4°C with each of the indicated primary antibodies. Subsequently, the membranes were washed with PBST three times for 10 min. The membranes were then probed with HRP-conjugated secondary antibodies (cat. no. ab205719 and cat. no. ab205718; Abcam) in TBST for 1 h at room temperature, and washed with TBST three times. Following washing, enhanced chemiluminescence was used to incubate the membrane and bands were visualized using the ECL Plus Western Blotting Detection system™ (GE Healthcare Life Sciences). Signals were detected and documented with the densitometry system LAS-3000 (Fujifilm).

A tube formation assay was used to evaluate vascular activity of HCC cells on HUVECs tube formation. The upper chamber was prepared by plating HUVECs onto Matrigel basement membrane matrix (BD Biosciences) in Transwell filters (0.4-µm pore size; Costar) followed by incubation at 37°C for 24 h. HUVECs and HCC cells were co-cultured at 37°C for 48 h. Tubes were observed under an inverted light microscope.

Huh7 cells were seeded in a 10-cm dish at an initial concentration of 2×106 cells. After 24 h, the medium was replaced with serum-free DMEM and cultured for a further 24 h. The medium was centrifuged at 20,8000 × g for 15 min at 4°C and the supernatant was then filtered by ultrafiltration using Amicon Ultra-4 (5K; EMD Millipore, Merck KGaA). Concentrated protein (30 µl) was collected (per dish) and then added to 1 ml RIPA buffer (Sigma-Aldrich; Merck KGaA). Following incubation with simtuzumab antibody for 8 h at 4°C, A/G-agarose beads were added with gentle rocking for 3 h at 4°C. Following centrifugation at 1,008 × g for 30 sec at 4°C, the pellets were washed with RIPA buffer three times and re-suspended in 2X SDS sample buffer. The samples were then subjected to 12% SDS gel electrophoresis.

All statistical analyses were performed with GraphPad Prism 6.0 (GraphPad Software, Inc.). The data were presented as the mean ± standard deviation (SD), and the experiments were performed in triplicate. For data analyses, a two-tailed Student's t-test was used to examine the differences between groups, and comparisons between multiple groups were determined by one-way analysis of variance (ANOVA) followed by Tukey's multiple comparison test. In all comparisons, P<0.05 was considered to indicate a statistically significant difference.

A previous study has reported that LOXL2 can promote bFGF-induced tumor angiogenesis (44). In the present study, HUVECs were co-cultured along with LOXL2-knockdown or the vector control HCC cells. As presented in Fig. 3A, HUVECs co-cultured with LOXL2-knockdown HCC cells reduced the generation of tubular networks. By contrast, HUVECs co-cultured with LOXL2-knockdown and Snail-overexpressing HCC cells exhibited a normal generation of tubular networks (Fig. 3A). It was then revealed that knockdown of LOXL2 in Huh7 or Hep3B cells inhibited the expression of VEGF but not in the Snail-overexpressing HCC cells (Fig. 3B). These findings indicated that LOXL2 may be involved in the regulation of angiogenesis in HCC.

HCC is the most common type of liver malignancy and its progression is a multistep process involving transformation, survival, proliferation, invasion, angiogenesis and metastasis (3,8). Presently, there is no marked and effective medical therapy for patients with advanced HCC (48). Therefore, it is necessary and crucial to develop more efficient therapeutic strategies and targets for patients with HCC.

FBP1, a rate-limiting enzyme in gluconeogenesis, catalyzes the hydrolysis of fructose 1,6-bisphosphate to fructose 6-phosphate and inorganic phosphate (27,57). Snail interacts with G9a and Dnmt1 to suppress FBP1 expression, and thus enhances aerobic glycolysis. The present study revealed that LOXL2-knockdown did not significantly affect the expression of FBP1 in Snail-overexpressing HCC cells. Similar results were obtained in the analysis of cellular glucose uptake and lactate generation in Snail-overexpressing HCC cells. Knockdown of FBP1 in HCC cells did not alter the expression levels of Snail. Thus, Snail is an upstream suppressor of FBP1. These results indicated that LOXL2 inhibited the expression of FBP1 and enhanced the glycolysis in a Snail-dependent manner. There have been numerous studies that have revealed the expression of LOXL2, Snail and FBP1 in human HCC tissues. For example, LOXL2 was revealed to be frequently overexpressed in human HCC and displayed poor prognosis (54,58–60). High expression of Snail or decreased expression of FBP1 was correlated with poor outcomes in HCC patients (61–66). Notably, HCC patients with high Snail but low FBP1 expression were identified with the worst prognosis. Conversely, patients with low Snail but high FBP1 expression were identified with the best prognosis (67).

HIF-1α is a subunit of the heterodimeric transcription factor HIF-1, which is considered to be a master transcriptional regulator of cellular and developmental responses to hypoxia (68). In accordance with its dynamic biological role, HIF-1α forms a heterodimer with HIF-1β and thus associates with HREs of promoters of hypoxia-responsive genes to induce transcription (69). VEGF is known to be a target gene of HIF-1α. VEGF is one of the most important angiogenic factors in cancer progression and is important to regulate cancer cell proliferation and migration (70). The present study indicated that LOXL2 could induce cell proliferation and angiogenesis of HCC cells. Accordingly, it also indicated that LOXL2 was responsible for the upregulation of HIF-1α and VEGF.

FBP1 has been reported to inhibit HIF-1α activity or expression (27,46). The present study also revealed that knockdown of FBP1 increased the expression of HIF-1α in HCC cells. Additionally, knockdown of FBP1 in HCC cells did not alter the expression levels of Snail. This indicated that FBP1 only regulated the expression of HIF-1α, and Snail was an upstream suppressor of FBP1. Inhibition of the activity of LOXL2 by LOXL2-IN-1 also demonstrated a similar effect in LOXL2-knockdown HCC cells to the expression of Snail, FBP1, HIF-1α and VEGF. By contrast, LOXL2-IN-1 did not alter the expression of Snail, HIF-1α and VEGF in FBP1-knockdown HCC cells. Moreover, it was revealed that LOXL2-IN-1 inhibitor could exert a synergistic inhibitory effect with HIF-1α inhibitor PX-478 on the expression of VEGF. HCC is a highly angiogenic cancer (71,72), and therefore antiangiogenic therapy is an effective strategy in the treatment of HCC. LOX-L2 inhibitors could be potent combination partners for the antiangiogenic drugs approved for the treatment of HCC such as Cabometyx, Cyramza, Lenvatinib Mesylate, Ramucirumab and Sorafenib Tosylate (73,74). The present study revealed a potential role of LOXL2 in HCC, which may provide new insights into the treatment of HCC. However, a limitation of the present study was that the effect of LOXL2 therapeutic antibody or LOXL2 inhibitor was not verified in an in vivo study. We will further investigate the effect of LOXL2 therapeutic antibody or LOXL2 inhibitor in animal models of HCC.

In conclusion, the present study demonstrated that LOXL2 upregulated HIF-1α/VEGF signaling pathways via the Snail-FBP1 axis, and this phenomenon could be inhibited by LOXL2 inhibition. Therefore, these findings further support that LOXL2 serves an important role in the progression of HCC. Considering the high expression level of LOXL2 in HCC observed in several studies, LOXL2 may be considered a promising candidate for novel treatment strategies against HCC.

The present study was supported by the National Nature Science Foundation of China (grant no. 81502694). 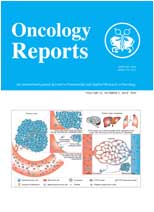