Iron is an essential nutrient that facilitates cell proliferation and growth, and it can contribute to tumor growth. Although iron chelators have shown great potential in preclinical cancer models, they can cause adverse side‑effects. The aim of the present study was to determine whether treatment with 5‑aminolevurinic acid (5‑ALA) has antitumor effects in bladder cancer, by reduction of mitochondrial iron without using an iron chelator, through activation of heme synthesis. T24 and MGH‑U3 cells were treated with 5‑ALA. Ferrochelatase uses iron to convert protoporphyrin IX into heme, thus additional groups of T24 and MGH‑U3 cells were transfected with synthesized ferrochelatase small interfering RNA (siRNA) either to silence ferrochelatase or to provide a negative siRNA control group, and then cell viability, apoptosis, mitochondrial Fe2+, the cell cycle, and ferritin expression were analyzed in all groups and compared. As an in vivo assessment, mice with orthotopic bladder cancer induced using N‑butyl‑N‑(4‑hydro‑oxybutyl) were treated with 5‑ALA. Bladder weight and pathological findings were evaluated, and immunohistochemical analysis was performed for ferritin and proliferating cell nuclear antigen (PCNA). In the cells treated with 5‑ALA, proliferation was decreased compared with the controls, and apoptosis was not detected. In addition, the expression of Fe2+ in mitochondria was decreased by 5‑ALA, expression of ferritin was also reduced by 5‑ALA, and the percentage of cells in the S phase of the cell cycle was significantly increased by 5‑ALA. In T24 and MGH‑U3 cells with silenced ferrochelatase, the inhibition of cell proliferation, decreased expression of Fe2+ in mitochondria, reduced expression of ferritin, and increased percentage of cells in the S phase by treatment with 5‑ALA were weakened. In vivo, no mouse treated with 5‑ALA developed muscle‑invasive bladder cancer. The expression of ferritin was weaker in mice treated with 5‑ALA and that of PCNA was higher than that in mice treated without 5‑ALA. It was concluded that 5‑ALA inhibited proliferation of bladder cancer cells by activating heme synthesis.

Iron is an essential nutrient that facilitates cell proliferation and growth (1), and it can contribute to tumor growth (1). Campbell et al (2) demonstrated that exposure to iron oxide dust tripled the incidence of pulmonary tumors in mice. Richmond et al (3) showed that intramuscular injection of iron-dextran induced sarcoma in rats. Hann et al (4) reported that the growth rate of tumor xenografts could be influenced by levels of dietary iron. Regarding bladder cancer, there have been few studies concerning the association between bladder cancer and iron. Seligman et al (5) reported that bladder cancer cellular proliferation was dependent on iron. Therefore, chelating iron, such as desferrioxamine (DFO), has been evaluated for its antitumor effects (1,6), including in bladder cancer (5). Seligman et al (5) demonstrated that DFO inhibited proliferation of bladder cancer cells. Although iron chelators have shown great potential in preclinical cancer models (6), they can cause adverse side-effects, such as infection and gastrointestinal bleeding (7). Therefore, these challenges must be overcome to improve the therapeutical efficacy of iron chelators for tumor treatment (7).

In bladder cancer, photodynamic diagnosis using 5-aminolevurinic acid (5-ALA) is widely used in clinical practice (11). 5-ALA is distributed ubiquitously in mammalian cells and is a precursor of heme, which is essential in aerobic energy metabolism and the electron-transport system (12). In cancer cells, 5-ALA causes significantly higher accumulation of fluorescent endogenous porphyrins, mainly protoporphyrin IX, than in healthy cells due to certain effects, such as decreased ferrochelatase activity (8,12). The enzyme ferrochelatase converts protoporphyrin IX into heme with iron (13). Treatment with 5-ALA significantly increases protoporphyrin IX in cancer cells and activates heme synthesis (14). Therefore, the aim of the present study was to determine whether treatment with 5-ALA has antitumor effects in bladder cancer by reduction of mitochondrial iron without using chelating iron through activation of heme synthesis.

T24 and MGH-U3 cells were seeded into 96-well plates at 2×103 cells/well and incubated overnight. The growth medium was removed, and serum plus medium with or without 5-ALA (0.1 and 1 mM; SBI Phramaceuticals Co., Ltd.) under dark conditions was applied. Cells at 48 h were assessed using a Cell Counting Kit-8 (Dojindo Laboratories, Inc.) according to the manufacturer's protocol. The absorbance was measured at 490 nm with a reference at 630 nm using an Infinite 200M PRO microplate auto-reader (Tecan Group, Ltd.). Experiments were performed three times with duplicate samples.

Annexin V assays using Muse® Annexin V & Dead Cell Assay Kit (cat. no. MCH100105; Merck KGaA) following the manufacturer's instructions were performed. Briefly, after treatment with T24 and MGH-U3 cells (1×105 cells) with 1 mM 5-ALA for 9 h, the detached and adherent cells were collected and incubated with Annexin V and 7-amino-actinomycin D, a dead cell marker, for 20 min at room temperature in the dark. The events for live, early, and late apoptotic cells were counted with the Muse™ Cell Analyzer (software version. 1.5.0.0; Merck KGaA).

T24 and MGH-U3 cells in 6-well plates at 1×105 cells/well were transfected with synthesized siRNA ferrochelatase (si-FECH; cat. no. sc-60631; Santa Cruz Biotechnology, Inc.) or siRNA negative control (si-NC; cat. no. 4390843; Invitrogen; Life Technologies; Thermo Fisher Scientific, Inc.) with 50 pmol of siRNA and 5 µl of Lipofectamine 2000 (Life Technologies; Thermo Fisher Scientific, Inc.) in 6-well plates according to the manufacturer's instructions at 37°C for 48 h. Following transfection, protein was extracted, and the expression of ferrochelatase was measured in each cell line by western blotting.

Evaluation of Fe2+ in mitochondria

In 6-well plates at 1×105 cells/well, T24 and MGH-U3 cells transfected with si-FECH or si-NC were treated with 0, 0.1 and 1 mM 5-ALA in an RPMI-1640 growth medium supplemented with 10% FBS and incubated for 48 h. Fe2+ in mitochondria was then evaluated using Mito-FerroGreen (Dojindo Laboratories, Inc.) according to the manufacturer's protocol. Fluorescence of Fe2+ in mitochondria was evaluated using a fluorescence microscope (EVOS FL Auto; Life Technologies; Thermo Fisher Scientific, Inc.). The intensity ratio was evaluated by measuring the intensity divided by the number of cells in an ×400 field of vision in the three views that exhibited the strongest intensity detected by three observers (YN, TO and YO). ImageJ software (version 1.8.0_172; National Institutes of Health) was used for the quantitative assessments.

Following transfection of siRNA into T24 and MGH-U3, the cells in 6-well plates at 1×105 cells/well were treated with 0 mM, 0.1 mM, or 1 mM 5-ALA for 48 h. The cell cycle was analyzed using a Muse™ Cell Cycle Kit (MilliporeSigma) following the manufacturer's instructions. The results were analyzed using the Muse™ Cell Analyzer. Experiments were performed three times.

A total of eight C57BL/6J male mice (5 weeks old; 20 g) were obtained from OrientalBioService, Inc. Treatment was started 2 weeks later. The mice were kept in a temperature (24°C)- and humidity (60%)-controlled room, with a 12/12-h light/dark cycle, and food and water were provided ad libitum. The eight mice were randomly divided into two groups as follows: Control group, four mice received 0.05% N-butyl-N-(4-hydroxybutyl) nitrosamine (BBN) in drinking water for 20 weeks to develop muscle-invasive bladder cancer; and 5-ALA group, four mice received 0.05% BBN plus 6 mM ALA (16) in drinking water for 20 weeks. Following treatment for 20 weeks, all mice were euthanized by exsanguination under anesthesia with 2–3% isoflurane and their tissues were harvested for the subsequent experiments. The animal study was approved (approval no. 11921, 2017/2/23) by the Ethics Committee on Animal Research of Nara Medical University (Nara, Japan). All animal experiments were conducted in accordance with the Guidelines for the Welfare of Animals in Experimental Neoplasia (17).

All resected bladders were filled with 150 µl of 10% neutral-buffered formalin, and all specimens were fixed in 10% neutral-buffered formalin at room temperature for 48 h. Paraffin blocks were cut into 5-µm thickness and placed on SuperFrost Plus microslides (Thermo Fisher Scientific, Inc.). Sections were deparaffinized and antigen retrieval was carried out in citric acid buffer (pH 6.0) using an autoclave. IHC staining was performed using a Histofine SAB-PO kit (Nichirei Biosciences, Inc.) according to the manufacturer's instructions. Briefly, slides were treated with 1% hydrogen peroxide in methanol at room temperature for 10 min to block endogenous peroxidase activity. The slides were incubated overnight at 4°C with rabbit monoclonal antibodies against ferritin (product code ab75972, dilution 1:50; Abcam); rabbit polyclonal antibodies against cytokeratin 20 (CK20) (cat. no. bs-1588R; dilution 1:100; Bioss Antibodies); rabbit polyclonal antibodies against survivin (cat. no. 10508-1-AP; dilution 1:500; ProteinTech Group, Inc.), which is specific to the G2/M phase in cells; or rabbit monoclonal antibodies against proliferating cell nuclear antigen (PCNA) (product code ab92552; dilution 1:100; Abcam), which is specific to the S phase in cells. The slides were then incubated at room temperature for 10 min with 100 µl of the secondary antibody [anti-mouse and anti-rabbit IgG antibodies, included in the Histofine SAB-PO kit (Nichirei Biosciences, Inc.), at 1 µl/ml]. The slides were counterstained with Meyer's hematoxylin (Muto Pure Chemicals Co., Ltd.) at room temperature for 1 min, dehydrated, and sealed with a cover slide. Immunoreactive cancer cells were counted based on five independent high-power microscopic fields (HPF; magnification, ×400; 0.0625 µm2), and the number of positive cells was divided by the total number of cancer cells (1–100%) using a microscope (EVOS FL Auto) by two investigators (SH and YM) to quantify the expression level of ferritin, CK20, survivin, and PCNA in cancer cells.

PRISM software version 7.00 (GraphPad Software, Inc.) was used for the statistical analysis. The data are presented as the mean ± standard deviation (SD). The unpaired t-test was used for binary comparisons between two groups. A P-value of <0.05 was considered to indicate a statistically significant difference.

Cell cytotoxicity in cells with gene silencing of ferrochelatase

Pathological findings in the bladders of mice.

The present study has some limitations that should be considered. First, only two types of bladder cancer cell lines were evaluated. The effect of 5-ALA, which inhibited the viability of bladder cancer cells by activating heme synthesis, may be in various types of cancers, especially in cancers where chelating iron has been reported to exert an antitumor effect. Therefore, the present mechanism should be evaluated in different cancer cell lines in future studies. Second, the number of mice used in the in vivo study was small. However, animal use guidelines recommend that the number of animals used in experiments be as limited as possible. Because the results showed significant differences between groups, an additional in vivo study was not performed.

The authors would like to thank SBI Pharmaceuticals Co., Ltd. (Tokyo, Japan) for providing 5-aminolevurinic acid used in this study.

The present study was supported by Ministry of Education, Culture, Sports, Sciences and Technology of Japan, and Grants-in-Aid for Science Research (C) JSPS KAKENHI grant no. 16K11026 (YN).

The data that support the findings of this study are available from the corresponding author upon reasonable request.

The animal study was approved by the Committee on Animal Research of Nara Medical University (approval no. 11921, 2017/2/23). All animal experiments were conducted in accordance with the Guidelines for Welfare of Animals in Experimental Neoplasia. This study did not include patient participation or analysis of patient data. 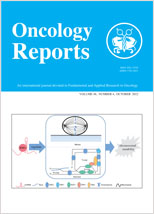