Despite the wide use of 5-fluorouracil (5-FU) for colon cancer, the genes regulating its cytotoxic effect are poorly understood. We used a high-density oligonucleotide microarray representing approximately 7000 genes to determine changes in gene expression caused by 5-FU treatment in the colon cancer cell line, SW620. The microarray showed that the most strongly up-regulated gene by 5-FU was vitamin D3 up-regulated protein 1 (VDUP1), an interesting stress response gene, which was originally reported as a vitamin D3 inducible gene in HL-60. TaqMan RT-PCR assay confirmed that VDUP1 gene expression was significantly increased after 24 h of 5-FU treatment compared with untreated control (p<0.01). Moreover, the expression of vitamin D3 receptor, thymidylate synthase (TS), and E2F1 did not change within 24 h of 5-FU treatment, suggesting a different gene-regulatory pathway from that of VDUP1. Recent studies have gradually clarified the potential role of VDUP1 via interaction with TRX in an anti-tumor effect. Therefore, VDUP1 not only may be induced by stress response as a result of 5-FU cytotoxicity, but may also play a key role in 5-FU cytotoxicity in colon cancers. Our experiment using a microarray and TaqMan RT-PCR assay, together with previous reports, provides new insight into a potential mechanism of 5-FU cytotoxicity. 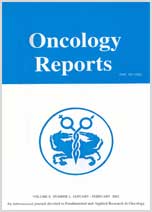