Degenerative lumbar scoliosis (DLS) is defined as a spinal deformity with a Cobb angle of >10°, which develops after skeletal maturity without a previous history of scoliosis. It generally presents in the lumbar or thoracolumbar part of the spine and may be associated with severe back pain (1,2). The prevalence of DLS increases with age and its incidence in patients >50 years of age was reported to be ∼6% (3). The etiology of DLS has not been clearly established. However, the most commonly proposed causes of DLS were ost eoporosis and degenerative diseases of the spinal column (3). Several factors, including life-style, intrinsic mediators and hormonal or genetic factors, are likely to affect the development or the acceleration of DLS (4,5).

A total of 51 DLS patients and 145 control subjects were enrolled in this study. DLS patients were recruited from the Spine Center of Kyung Hee University East-West Neo Medical Center (Seoul, Korea) and the National Medical Center (Seoul, Korea) and were selected among ∼10,000 patients per year during a 3-year period. Each patient was diagnosed by a specialized spinal surgeon and fulfilled all physical examination and radiographic criteria. The DLS group comprised 44 females and 7 males and the mean age was 68.67±8.00 years [mean ± standard deviation (SD)]. The Cobb angle in the DLS group was 19.36±7.38° and the lateral listhesis was 4.84±4.24 mm. A left convex curve was observed more frequently compared to a right convex curve (31 and 20 patients, respectively) (Table I). DLS patients were divided into two subgroups according to clinical characteristics, including Cobb angle (≤30° vs. >30°), lateral listhesis (≤5 vs. >5 mm) and curve direction (left vs. right) (16,17). The control group included 145 patients (124 females and 21 males) who were recruited from a general health check-up program after it was confirmed that they had no clinical evidence of scoliosis or any other severe disorders. The gender and age of the control group were matched with those of the DLS group. This study was conducted according to the Declaration of Helsinki guidelines. Written informed consent was obtained from each individual. The research protocol was approved by the Ethics Review Committee of the Medical Research Institute, Kyung Hee University Medical Center, Seoul, Korea.

Demographic characteristics of the study subjects.

Primer sequences used for each SNP in RIMS2.

The clinical characteristics of control subjects and DLS patients are summarized in Table I. The mean age of the control and the DLS group was 65.57±8.65 (mean ± SD) and 68.67±8.00 years, respectively. In the DLS group, the average Cobb angle was 19.36±7.38° and the length of the lateral listhesis was 4.84±4.24 mm. Patients with a left convex curve outnumbered those with a right convex curve (31 and 20, respectively) (Table I).

Genotype and allele frequencies of RIMS2 polymorphisms in the control and DLS groups.

Haplotype distributions of RIMS2 polymorphisms (rs2028945 and rs10461) in the control and DLS groups.

The results obtained in this study were compared with different ethnic populations by searching the human SNP database (www.ncbi.nlm.nih.gov/SNP; dbSNP BUILD 131), which includes the genotype frequencies of each SNP. Genotype distributions in our control subjects were similar to those in Asian populations, particularly the Chinese population (Table V).

DLS develops de novo in adulthood and presents more frequently in the elderly (3). With increasing life expectancy, DLS may complicate degenerative spondylolisthesis, lateral listhesis or spinal stenosis, in which the neural elements are compressed by bone and soft tissue, leading to nerve root ischemia (2). Therefore, patients with accelerated DLS may develop severe back pain and neurological deficits (3). Despite a variety of studies on DLS, the etiology remains unknown. Therefore, the potential of RIMS2 as a candidate gene was evaluated. Our results demonstrated that rs10461 (Ala1327Ala) was significantly associated with DLS. It was hypothesized that the C allele of rs10461 may be a risk factor in the development of DLS (Table III). In addition, two haplotypes (CC and CT) exhibited significant differences between the control and DLS groups. The results indicated that RIMS2 may be associated with DLS. However, RIMS2 polymorphisms were not associated with the clinical features of DLS (Cobb angle, lateral listhesis and curve direction) (data not shown).

RIMS comprise four members, RIMS1–4. RIMS1 and RIMS2 are 512.7 and 747.9 kb in size, respectively, whereas RIMS3 and RIMS4 are 15.4 and 54.5 kb, respectively (8,15). RIMS1 expresses RIM1α; the gene may encode a single isoform. By contrast, RIMS2 encodes three isoforms (RIM2α, RIM2β and RIM2γ); besides the exon for the α isoform, two additional separate exons in RIMS2 may encode the N-termini of RIM2β and RIM2γ through β- and γ-specific promoters, respectively. RIMS3 and RIMS4 express a single isoform, RIM3γ and RIM4γ, respectively (8,15). The α-RIMs (RIM1α and RIM2α) contain the full complement of domains which are the N-terminal Zn2+-finger domain, the central PDZ and C2A domains and the C-terminal C2B domain (15). They are able to bind to Rab3 and Munc13 proteins (13,21,22) and closely interact with α-liprins (13), which in turn regulate the active zone structure (23,24). Therefore, α-RIMs are considered to be essential for regulating neurotransmitter releases (8,13,25,26), some of which are involved in the neurobiology of schizophrenia (27,28).

The exocytosis of neurotransmitter-filled synaptic vesicles is under tight regulation in presynaptic nerve terminals. RIMs may mediate the regulation of exocytosis via interacting with multiple synaptic proteins, such as Rab3 (6,7), Munc13 (8), ELKS (9,10), RIM-BPs (11), α-liprins and synaptotagmin 1 (12–14). In addition, RIMs are indirectly connected with the active zone proteins Piccolo and Bassoon via ELKS (29). In a previous study, the experimental loss of α-RIMs resulted in the severe impairment of motor control, profound defects of synaptic transmission at neuromuscular junctions and increment of irregularly distributed motor synapses in skeletal muscle fibers (8). These results suggested that RIMs may affect the function of the neuromuscular system. However, no published studies assessing the potential role of RIMs in bone degeneration or the genetic association of RIMS polymorphisms in DLS are available. We demonstrated that RIMS2, known as a regulatory gene for synaptic membrane exocytosis in the central nervous system, may be a candidate gene associated with the risk of DLS in the Korean population. However, additional studies including a larger number of subjects and different populations are required to confirm these findings. In conclusion, the rs10461 in RIMS2 was associated with DLS in the Korean population. This finding suggests that RIMS2 may affect the development of DLS. 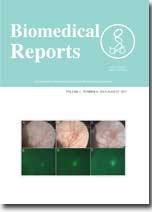