It was previously demonstrated that the main cause behind keloid formation may be keloid fibroblast abnormalities, which are closely associated with the microenvironment of the keloid lesion. The post‑traumatic and chronic inflammation of the keloid lesion area suggest that inflammatory mediators play an important role in the keloid microenvironment and are crucial for keloid fibroblast abnormalities. In this study, we hypothesized that the mechanism underlying keloid formation may involve the continuous upregulation of proinflammatory gene expression in keloid lesions. This hypothesis may explain the inflammatory response, invasive growth and recurrence following resection of keloids, as well as the selective localization of keloids in specific parts of a patient's body and the differences in localization among different patients.

Keloids are a type of benign, proliferative fibromas that form following trauma. The main characteristic of keloids is that they consist of fibroblasts exhibiting abnormally increased activity. Therefore, the connective tissue proliferates excessively with accompanying hyalinization, leading to overgrowth of scars. However, the pathogenesis has not been fully elucidated. Keloid scars are a type of unique benign human tumors without malignant potential that grow beyond their original boundaries and do not regress spontaneously, often resulting in organ deformity and dysfunction. Although independent or combined treatments may may be moderately effective, a meta-analysis revealed the treatment efficacy is not satisfactory (1,2). Keloids commonly recur following resection. Furthermore, the transplantation of human keloids to mice indicated that keloids exhibit tumorigenic characteristics (3).

The mechanisms underlying keloid formation, invasive growth, recurrence following resection, selective localization and differences in localization among different patients have not been elucidated. The exact pathogenesis of keloids has not yet been determined (4), a fact that attracted the interest of numerous scholars and led to various hypotheses (5–8). However, thus far no hypothesis has provided sufficient explanation of the clinicopathological characteristics of keloids.

Previous clinical, histopathological and molecular studies revealed the presence of chronic inflammation in keloids, suggesting that trauma or local inflammation may lead to keloid formation (9–12). Therefore, we hypothesized that the proinflammatory genes in the keloid lesion area are stimulated by the inflammatory response in the microenvironment, leading to the formation of keloids. Issues such as the cause of keloid formation, invasive growth and recurrence following resection, as well as their clinical cahracteristics, may all be explained by our hypothesis.

2. Keloid fibroblast abnormalities may be the main cause of keloid formation

The biological basis of keloid formation lies in the substantial proliferation and apoptosis inhibition of fibroblasts, the imbalance between collagen synthesis and degradation in the extracellular matrix and the significantly elevated production of certain cytokines. It is known that the trauma repair process involves three stages: inflammation, granulation tissue formation and extracellular matrix formation (13). Following the early period of granulation tissue formation, the number of macrophages and fibroblasts is significantly increased. They continuously synthesize extracellular matrix and reshape the tissue through the contraction of granulation tissue. In the process of trauma repair, a balance is maintained for the control of fibroblast proliferation and extracellular matrix synthesis. An increase in cell proliferation with a concomitant reduction in apoptosis may lead to keloid formation (14). Most scholars believe that the abnormal proliferation of fibroblasts is the main cause of hyperplasia and persistence of pathological scars (15). Keloid fibroblasts are considered to proliferate more rapidly compared to the fibroblasts of hypertrophic scars (16), with oversecretion of type I collagen fibers and high expression levels of vascular endothelial growth factor, transforming growth factor-β 1/β2 and platelet-derived growth factor-α (17). Ladin et al(18) demonstrated that the apoptosis rate of keloid fibroblasts was relatively low, which was in accordance with the previously reported downregulation of apoptosis-related gene expression (19,20). In addition, cultured keloid fibroblasts exhibited a distinct increase in collagen fiber synthesis and secretion of matrix metalloproteinase inhibitors compared to normal skin fibroblasts (21). Keloid fibroblasts also exhibited a significantly increased proliferative and anti-apoptotic ability compared to normal skin fibroblasts (22). It was suggested that the keloid fibroblast may be a pluripotent precursor cell with multiple differentiation capacities, similar to the human skin precursor cell, and may be able to differentiate into several types of cells, such as adipocytes, osteoblasts, chondrocytes, smooth muscle cells, vascular endothelial cells, glial cells and oligodendrocytes under different culture conditions (23). Studies using gene chip technology demonstrated an upregulation of ~15% of the genes in keloid fibroblasts, among which the most important are proinflammatory factors, such as interleukin (IL)-1α, IL-1β, IL-6 and tumor necrosis factor-α (TNF-α) (24,25). Based on those findings, keloid and normal skin fibroblasts are significantly different and keloid fibroblast abnormalities may be the main cause behind keloid formation.

3. Role of the keloid lesion microenvironment in keloid formation

Keloids mainly occur in positions such as anterior chest, lateral upper arm, scapular region and suprapubic area, with accompanying symptoms such as peripheral erythema, mild pain and pruritus, particularly during the early phases. The main histopathological characteristics include abnormal proliferation of fibroblasts, overaccumulation of extracellular matrix components such as glycoproteins, fiber adhesion factors and collagen and condensation of reticular collagen (10,11). The center of the keloid lesion is highly collagenized, with an almost complete absence of blood vessels and cells. By contrast, a large number of lymphocytes and fibroblasts are dispersed among a rich network of blood vessels where the keloid is adjacent to normal skin (27,29,30). Proliferation, apoptosis and necrosis coexist independently. The interplay between the invasive inflammatory cells in dermal tissue, vascular endothelial cells and fibroblasts may play a role in the excessive proliferation of keloids. During the process of keloid formation and development, angiogenesis is likely to play a significant role, since it supplies nutrients for keloid formation.

During the pathological process of wound healing or remodeling, fibroblasts are the main target and effector cells. Keloid fibroblasts secrete cytokines and chemokines, such as granulocyte-macrophage colony-stimulating factor, stem cell factor, TNF-α, nerve growth factor, IL-8 and eosinophil-activating factors. By using gene chip technology, Chen et al(24) and Messadi et al(19) discovered that ~15% of genes in keloid fibroblasts, the most important being proinflammatory factors, were upregulated, suggesting that keloid fibroblasts are crucial in the occurrence of chronic inflammation. It was proposed that keloid formation may be caused by inflammation arising from the abnormal secretion of proinflammatory mediators and irregular response to other inflammatory signals mediated by keloid fibroblasts (12). It was also proven that, as a special form of wound healing, keloids exhibit characteristics similar to the long-lasting inflammatory responses, immune abnormalities and invasive growth characteristics of tumors (31,32).

Nuclear transcription factor-κB (NF-κB) is a protein family widespread in eukaryotes, which is composed of polypeptide subunits. Being involved in signal transduction pathways, it is essential for the transcription of a variety of proinflammatory genes. Upon activation, NF-κB may promote the mRNA expression and release of a variety of inflammatory mediators. It is considered that the NF-κB signaling pathway is activated in keloid tissues and fibroblasts, contributing to the persistence of keloid inflammation (19). In cultured keloid fibroblasts, NF-κB activity was increased compared to that in normal skin fibroblasts and the survival and development of keloid fibroblasts was shown to depend largely on NF-κB signal transduction (25). Accordingly, the inhibition of keloid formation by glucocorticoids may be mediated through inhibiting the activation of the NF-κB signaling pathway (33). In addition, non-steroidal anti-inflammatory drugs, such as aspirin and sodium salicylate, may inhibit the binding of ATP to the inhibitor of NF-κB kinase subunit β, thus inhibiting the NF-κB signaling pathway (34,35).

Thus, the clinical, histopathological and molecular biological findings mentioned above indicate that chronic inflammation is present in keloids and plays an important role in the process of keloid formation.

6. Proposed hypothesis for the cause of keloid formation

As discussed above, the keloid lesion microenvironment is mainly responsible for keloid fibroblast abnormalities and keloid formation. Various organisms have adjusted their own structure in order to adapt to the environmental changes during the long-term evolutionary process (survival of the fittest). Similarly, the human skin in different locations, such as the eyelids, dorsum of the body, face and foot, differs in its structure, in order to adapt to the different environmental requirements. Therefore, the local microenvironment of the skin and its susceptibility to external or internal stimuli differ by location. We hypothesized that the proinflammatory genes in the microenvironment of skin keloid lesions are highly sensitive to traumatic and post-traumatic inflammatory responses. The continuous upregulation of their expression following traumatic and inflammatory stimuli results in keloid formation and chronic inflammation.

It was previously proposed that keloid formation may result from inflammation arising from the secretion of proinflammatory mediators and the abnormal response to other inflammatory signals mediated by keloid fibroblasts (12). In accordance with this hypothesis, Chen et al(24) and Messadi et al(25) demonstrated that ~15% of the genes, the most important being proinflammatory factors, such as IL-1α, IL-1β, IL-6 and TNF-α, were upregulated in keloid fibroblasts.

Thus, the fact that proinflammatory genes in the microenvironment of the keloid skin lesions are sensitive to trauma and inflammatory response may explain the selective localization of keloids in certain parts of a patient’s body and the differences in localization among different patients. This chronic inflammation may also explain the invasive growth of keloids.

Based on the above, we concluded that the continuous upregulation of proinflammatory genes in the microenvironment of keloid skin lesions may be the main cause behind keloid formation.

This study was supported by the National Natural Science Foundation of China (no. 81260291). The authors would like to thank Dr Tao Liu and Dr Chuanshan Zhang at the laboratory of The First Affiliated Hospital of Xinjiang Medical University for their assistance. 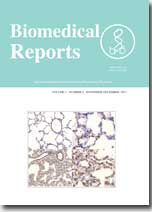