The present study was designed to investigate the phenotypic transformation and migration of adventitial fibroblasts using 5-bromo-2'-deoxyuridine (BrdU) labeling following angioplasty and to explore the correlation between adventitial cells and post-angioplasty restenosis. A vascular restenosis model was established in 23 rats by injuring the common carotid artery with a wire. BrDU was used to label the fibroblasts followed by immunohistochemistry for α-actin. Blood vessels were observed under light microscopy and scanning electron microscopy followed by image analysis. The number of BrDU-positive fibroblasts in the intima, media and adventitia of the blood vessels was determined 3, 7, 41 and 28 days after injury. The results demonstrated that at different time points, the number of BrDU-positive cells was significantly different in the intima, media and adventia (P<0.05). Electron microscopy indicated that the fibroblasts were full of cytoplasm. In addition, many secretory granules were noted on the rough endoplasmic reticulum and a large amount of microfilament bundles were noted after angioplasty. The fibroblasts transformed into myofibroblasts. Seven and 14 days after injury, the myofibroblasts formed wide pseudopods stretching to the fenestrae of the external and internal elastic lamina, and cells had a tendency to migrate into the lumen. The fibroblasts in the adventitia underwent transformation after percutaneous transluminal angioplasty and secreted α-actin. In conclusion, the fibroblasts in the adventitia transformed into myofibroblasts, migrated into and proliferated in the intima and became a component of the newly generated intima. Adventitial cells are thus related to vascular restenosis.

We establishment an animal model of common carotid artery restenosis using a modified wire method. A total of 24 male SD rats weighing 250–300 g were divided into 4 groups and sacrificed at 3, 7, 14 and 28 days after vascular injury. For preparation of the arterial injury model, animals were intraperitoneally anesthetized with 10% chloral hydrate (350 mg/kg) and then a midline incision was made in the neck. Following separation of subcutaneous tissues, the bilateral common carotid artery (CCA) and external carotid artery (ECA) were exposed. A metal wire 0.038 inches in diameter was introduced into one of the CCAs through the ECA and the wire was forwarded and withdrawn 3–4 times to injure the vascular intima and all the layers of the blood vessels, which is similar to the vascular injury following balloon injury or intravascular stenting. The rats with injured CCAs served as the experimental group and those with intact CCAs were the control group.

Preparation of the antigen marker and labeling

5-Bromo-2′-deoxyuridine (BrdU) is involved in the synthesis of DNA in proliferating cells. After BrdU was integrated into proliferating adventitial cells, immunohistochemistry was performed to detect the number of BrdU-positive cells. First, the BrdU powder was dissolved in PBS at a final concentration of 25% (0.25 mg/ml). Then, pluronic biogum powder was mixed together with the above BrdU solution at a final concentration of 2.5% (2.5 mg/ml). The injured and uninjured arteries were washed with sterilized normal saline and the liquid was removed. The BrdU solution was mixing by shaking before use, and then, 0.2 ml of this solution was used to smear the bilateral CCAs.

Tissues were collected, embedded in paraffin and cut into 5-μm consecutive sections which were adherent to the APES-treated slides. The sections were heated at 58–60°C for 30–60 min and the slides were allowed to cool to room temperature for further use.

Double immunohistochemistry for BrDU and α-actin

The 1-mm3 samples of tissues were fixed in 2.5% glutaraldehyde in 0.1 mol/l sodium cacodylate buffer for 1 h. After dehydration, embedding, sectioning and staining with uranyl acetate, the tissues were ultra-sectioned using an LKB-V ultramicrotome (Sweden) and the myofibroblasts in the different layers were observed under a transmission electron microscope (Hitachi H-7500, Japan).

Statistical analysis was carried out with SPSS version 10.0, and the t-test and analysis of variance were performed for comparisons. A value of P<0.05 was considered to indicate statistical significance.

Number of BrDU-positive cells in the different vascular layers at different time points.

Double immunohistochemistry for BrDU and α-actin

Seven days after PTA, the number of adventitial cells increased, the media was thickened and newly generated intima was barely noticeable. At 14 days after PTA, the intima was significantly thickened. Thus, in the experimental group, samples collected at 7 and 14 days were used for further double immunohisto-chemistry for BrDU and α-actin. The nucleus was stained by BrDU and BrDU-positive cells had a blue nucleus. α-actin-positive cells had brown cytoplasm. The results showed, 7 days after PTA, that the BrDU-positive cells in the adventitia were also positive for α-actin, suggesting that the proliferating cells also expressed α-actin. In addition, these cells aggregated around the external elastic lamina. At 14 days after PTA, the number of cells positive for both BrDU and α-actin were markedly reduced but these cells in the newly generated intima increased dramatically (Fig. 2). Double immunohistochemistry revealed that the phenotype of the adventitial cells changed after PTA, and that the adventitial cells had transformed into myofibroblasts.

Phenotypic transformation of cells in the adventitia

A majority of researchers postulate that proliferating cells at an early stage following PTA are VSMCs in several regions of the vascular media. VSMCs have been found to proliferate at 24–48 h after vascular injury (15) and their proliferation reaches a peak at 7–14 days after injury. These proliferating cells are mainly found in the vascular media. Following PTA, VSMCs in the vascular media auto-regulate and the VSMC phenotype switches from a contractile quiescent to a proliferative motile phenotype (synthetic phenotype). These cells are star-like in morphology and organelles increased. However, these cells lack contraction while proliferation, migration and secretion are significantly enhanced. In vascular restenosis, the phenotype of VSMCs reverses approximately 2 weeks after arterial injury, and the VSMC phenotype switches from a proliferative motile to a contractile quiescent phenotype. At 4–6 months after injury, VSMCs are in a relatively quiescent state when the restenosis has formed (16). However, our findings were inconsistent with those described above. Under light microscopy, at 3–7 days after PTA, the cells in the vascular adventitia were significantly altered and a large amount of short-spindle-like fibroblasts were noted. They had large nuclei and full cytoplasm and were in a proliferative state. Analysis of BrDU-positive cells in all layers showed that cell proliferation was active in the vascular adventitia, which was consistent with the findings of Scott et al who observed that cell proliferation was mainly found in the adventitia at an early stage following PTA and the proliferation of adventitial cells was more obvious than those in the media. These findings differed from previous results that early cell proliferation was predominantly found in the vascular media. Double immunohisto chemistry showed, 7 days after PTA, that the BrDU-positive cells began to express α-actin. The myofibroblasts were transformed from fibroblasts located near the external elastic lamina. The α-actin expression was also found in the newly generated intima 14 days after PTA. Twenty-eight days after PTA, the α-actin expression was absent in the intima and adventitia. This suggests that cells migrating into the newly generated intima lose the ability to express α-actin at a late stage following PTA and these cells were transformed into fibroblasts. Wilcox and Scott (5) found that, at an early stage after arterial injury, proliferating adventitial cells were negative for α-actin. Phenotypic transformation occurred at 14 days after PTA and cells were positive for α-actin. Our results indicated that the time when fibroblasts underwent phenotypic transformation and expressed α-actin was different from that noted in the study of Wilcox and Scott. Our findings also confirmed that fibroblasts in the vascular adventitia underwent phenotypic transformation after arterial injury (6). The fibroblasts were transformed into myofibroblasts which possess the ability to proliferate, synthesize, migrate and specifically secrete and express α-actin. Thus, not only VSMCs in the media but fibroblasts in the adventitia have throwback after PTA. That is to say, the phenotype of these cells becomes primitive (17), which is shared by fibroblasts and VSMCs and is also a premise of the proliferation and migration of adventitial cells. In the present study, as noted by electron microscopy, myofibroblasts had many mitochondria and active Golgi body and the granules on rough endoplasmic reticulum increased, which suggest that the cells acquired the functions of synthesis and secretion following phenotypic transformation.

Some of the results of the study were from a doctoral dissertation for Tianjin Medical University and we thank He N.S. for assistance with the research study. 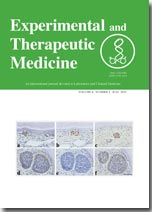