Cartilage defects are difficult to heal spontaneously, as cartilage tissue lacks blood vessels, nerves and lymph supplies, and the cartilage lesions do not usually reach the progenitor cells of the bone marrow (1). Severe cartilage damage caused by degeneration or excessive use may lead to osteoarthritis (OA), which causes pain, compromises mobility and poses a significant disease burden across the world (2). At present, cartilage tissue engineering is considered to be one of the most promising therapeutic approaches for the treatment of cartilage defect. The mechanism of this therapy is based on the fact that bone marrow mesenchymal stem cells (BMSCs) have the potential for multilineage differentiation, including osteogenesis, chondrogenesis and adipogenesis, as well as extensive proliferation.

Growth factors play a crucial role in the regulation of BMSC differentiation. A number of studies have demonstrated that transforming growth factor-β (TGF-β), bone morphogenetic protein (BMP) and insulin-like growth factor are able to induce chondrogenic differentiation in vitro, and promote the formation of cartilage-like tissue in vivo (3–6). However, growth factors not only upregulate the expression of hyaline cartilage-specific markers, such as collagen II, but also inevitably lead to further hypertrophic differentiation and contribute to the development of fibrous cartilage (7–10). Furthermore, the high cost, rapid degradation and easily-lost activity of growth factors limit their widespread use, particularly in clinical practice (11–13). In order to promote chondrogenesis and maintain the stable chondrogenic phenotype without hypertrophy, there is an urgent requirement to develop safe and low-cost drugs that can act as a substitute for or cooperate with growth factors (11,12).

Herba Epimedii (HEP) is a widely used traditional Chinese herb to treat osteoporosis in China, Japan and Korea (13,14). Icariin (ICA; C33H40O15; molecular weight, 676.65), the main pharmacologically active compound of HEP, has been suggested to be a potential accelerator for cartilage tissue engineering and a substitute for growth factors. However, these results were based on the use of chondrocytes (11,12,15). Although the application of chondrocytes in cartilage tissue engineering is relatively prevalent, several major challenges exist, including chondrocyte dedifferentiation, donor site morbidity and limited sources for harvesting cartilage tissue (1). Therefore, the present study investigated whether ICA had the potential to promote stable chondrogenesis of BMSCs without hypertrophic differentiation on the basis that the same chondrogenic medium containing TGF-β3 was added.

At day 14, cultured cells were washed three times with phosphate-buffered saline (PBS) and fixed for 10 min with 4% paraformaldehyde. Specimens were blocked with 5% bovine serum albumin for 1 h and incubated at 4°C overnight with the following primary antibodies: Anti-collagen II (1:100; GeneTex, Irvine, CA, USA), anti-aggrecan (1:200; Millipore, Billerica, MA, USA) and anti-SRY (sex determining region Y)-box 9 (SOX9) (1:200; Abcam, Cambridge, UK). Subsequent to washing three times with PBS, the cells were incubated with fluorescent secondary antibodies (Beyotime Institute of Biotechnology, Shanghai, China) for 2 h. For nuclear staining, DAPI (Beyotime Institute of Biotechnology) was applied for 3 min and subsequently observed under a fluorescence microscope (Leica DM 4000 B; Leica Microsystems, Wetzlar, Germany). Cell counting of 1,000 cells in five randomly selected fields was performed by Image-Pro Plus 6.0 software (Media Cybernetics, Inc. Rockville, MD, USA) and the percentage of positively stained cells was calculated as the ratio of the number of positive cells to the total number of DAPI-positive cells.

ALP activity was measured in the culture supernatants as previously described (7). Briefly, the media were replaced with the phenol red free equivalent at day 12. The culture supernatants were collected after two days and centrifuged at 1,400 × g for 10 min. Soluble ALP activity was detected with an alkaline phosphatase kit (Nanjing Jiancheng Bioengineering Institute, Nanjing, China).

Data are presented as the mean ± standard deviation and were analyzed using SPSS 16.0 software (SPSS, Inc., Chicago, IL, USA). The differences between the multiple group comparisons were evaluated by one-way analysis of variance followed by Tukey’s test. P<0.05 was considered to indicate a statistically significant difference, and P<0.01 was considered to indicate a marked statistically significant difference.

SOX9 is considered to be an early chondrogenic marker that induces the synthesis of collagen II and aggrecan. The present study further investigated whether ICA was able to promote the expression of SOX9 and subsequently induce chondrogenesis. As shown in Fig. 2C and D, the TGF-β3 + ICA group exhibited more intense staining of SOX9 and an increased percentage of positively stained cells (47.87±13.32%) compared with the TGF-β3 group (32.02±9.42%). Notably, the majority of cells stained positively within the aggregates, while less staining was detected in the single cells, suggesting that it is necessary for BMSCs undergoing chondrogenic induction to form aggregates and that ICA can induce the chondrogenesis.

It was also observed that BMSCs cultured in the absence of chondrogenic medium did not synthesize collagen II, aggrecan and SOX9; however, the protein expression levels were markedly increased in the TGF-β3 group. Furthermore, ICA treatment significantly promoted the synthesis of these cartilage-specific markers during the chondrogenic induction, which was consistent with the results of immunofluorescence analysis and RT-qPCR (Fig. 3B–D).

ICA does not promote hypertrophic differentiation of BMSCs

ICA has been effectively used in the treatment of osteoporosis, brain injury and cardiovascular disease (14,17,18). In particular, the long-term development of the drug and extensive case record of its safe usage have made it an attractive treatment option (12). When chondrocytes were cultured as the source cells, ICA was revealed to promote cartilage ECM synthesis and the expression levels of chondrogenic genes. ICA also improved the restoration efficiency of supercritical-sized osteochondral defects and enhanced the integration of newly formed cartilage with subchondral bone in a rabbit model (11,12). Several studies have shown that ICA is a safe and strong chondrocyte anabolic agent, which can enhance chondrocyte proliferation, attenuate lipopolysaccharide-induced inflammatory responses and reduce ECM degradation through the inhibition of nitric oxide, matrix metalloproteinase synthesis and cathepsin K activity (15,19). Furthermore, Zhang et al (20) reported that ICA reduced the activity of the transcription factor nuclear factor-κB in an inflammatory model induced by tumor necrosis factor-α and also protected chondrocytes from damage due to OA. There are certain potential molecular mechanisms that explain these effects. For instance, ICA not only enhances the expression and secretion of various growth factors, including BMP-2 and TGF-β1, but also upregulates the expression levels of Drosophila mothers against decapentaplegic (Smad) proteins, including Smad1, Smad4 and Smad5, which are key regulators specific to TGF-β1 activation affecting chondrogenic genes (21,22). There has been considerable evidence to suggest that BMP and TGF-β signals play a pivotal role in chondrogenic differentiation (3,5). Hypoxia-enhanced chondrogenesis of BMSCs occurs via the activation of the mitogen-activated protein kinase (MAPK) P38 pathway (23). Furthermore, ICA stimulates P38-MAPK activation in cardiomyocyte differentiation or neuronal protection (17,18). Thus, we hypothesized that ICA may promote the directed chondrogenic differentiation of BMSCs.

Glennon-Alty et al (16) reported that MSCs initially grew as a monolayer and subsequently compacted to form mono-layered and multi-layered aggregates; collagen II tended to be expressed at the center of the aggregates. A number of other studies also demonstrated that BMSCs induced with chondrogenic medium developed into a round phenotype and aggregated spontaneously into spheroid- or rod-like cell agglomerates. The formation of the aggregates exhibited a more intense staining for chondrogenic matrix deposition (24,25). Consistent with these studies, the present data revealed that treatment with ICA led to the formation of an increased number of and larger aggregates. More intense staining for collagen II, aggrecan and SOX9 was also visible within the aggregates. Notably, less staining for SOX9 was detectable in the single cells outside the aggregates, which may be due to the fact that chondrogenic differentiation requires the cell-cell and cell-matrix contacts created within the aggregates (25).

Previous studies have revealed that ICA significantly affects the expression levels of cartilage-specific genes (Col2a1, aggrecan and SOX9) and leads to higher levels of aggrecan production (11,12). Similarly, it was observed in the present study that ICA notably upregulated the expression levels of these genes, increased the staining intensity and protein levels of collagen II, aggrecan and SOX9. Hattori et al (26) demonstrated that SOX9 was highly expressed in chondrocytes of the prehypertrophic zone and was able to directly suppress hypertrophic differentiation. In the present study, upregulation of the expression of the SOX9 gene and protein indicated that ICA either delayed or prevented the BMSCs from dedifferentiating into a hypertrophic phenotype, although the same chondrogenic medium containing TGF-β3 was added. Aggrecan in the ECM maintained the structural integrity of the articular cartilage and allowed the normal biological function of the chondrocytes, including adhesion, migration, proliferation and differentiation, to be retained. In particular, aggrecan expression and synthesis was greatly enhanced in the ICA treatment group, consistent with another study (11).

In conclusion, the present study investigated the effects of ICA on BMSC phenotypes, including cell morphology and ECM synthesis, and the expression levels of cartilage-specific genes in vitro. It was demonstrated that ICA not only promoted the formation of larger aggregates but also enhanced ECM synthesis and increased the expression levels of cartilage-specific genes. However, ICA exhibited no effect on hypertrophic differentiation, suggesting that ICA may be a potential promoting compound for cartilage tissue engineering and may reduce the effect of growth factors that contribute to further hypertrophic differentiation. 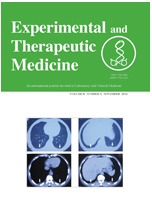