Fat distribution affects the risk of developing obesity‑related chronic diseases. Glypican 4 (Gpc4) may be involved in the regulation of obesity and body fat distribution. The aim of the study was to explore whether Gpc4 affects fat accumulation and the possible mechanism. C57BL/6J mice were fed with a high‑fat diet for eight weeks and treated with a peroxisome proliferators‑activated receptor γ (PPARγ) agonist, rosiglitazone, for another four weeks. The weight of inguinal and epididymal fat pads was determined. The Gpc4 mRNA and protein expression and two probable regulators of the Gpc4 gene, specificity protein 1 (Sp1) and Sp3 mRNA, were also measured. Mice treated with rosiglitazone showed a significant increase in subcutaneous fat weight compared with the untreated mice. The expression of Gpc4 mRNA and protein was significantly higher in visceral than in subcutaneous fat in all the groups. Compared with untreated mice the expression of Gpc4 and Sp3 mRNA in subcutaneous fat and the expression of Sp1 and Sp3 mRNA in visceral fat in mice treated with rosiglitazone increased significantly. The Sp3/Sp1 ratio was consistent with the expression of Gpc4 mRNA and protein in subcutaneous and visceral fat. The present study indicated that Gpc4 may play an important role in fat distribution, and this effect is perhaps regulated by the ratio of Sp3/Sp1 in the subcutaneous and visceral fat tissues.

Obesity has become a severe public health problem worldwide and it is closely associated with specific chronic diseases, including type 2 diabetes, metabolic syndrome and certain cancers. However, the risk of developing these disorders is different in two obesity types. Fat distribution in subcutaneous and visceral adipose tissues have different influences on developing these disorders (1). Individuals who exhibit peripheral obesity (fat mainly accumulated in the gluteofemoral region) are at little or no risk of obesity-related diseases, whereas individuals who exhibit central obesity (fat mainly distributed in visceral depots) are prone to developing these complications. However, depot-specific regulation of adipocyte genes and the mechanisms underlying depot-differences in the metabolism and function of subcutaneous and visceral fat depots thus far remain to be investigated.

Glypican 4 (Gpc4), a member of the heparan sulfate proteoglycan family, plays an important role in the regulation of cell growth, differentiation and morphogenesis (2). Gpc4 also acted as an essential modulator of key regulatory proteins, including Wnt, bone morphogenetic proteins, fibroblast growth factor and sonic hedgehog (3). The expression level of Gpc4 may contribute to the regulation of preadipocyte differentiation by means of regulating the binding of growth and differentiation factors to their cognate high affinity, signal-transducing receptors (4). The expression level of Gpc4 mRNA presents a clear difference in subcutaneous and visceral adipose tissues. There were strong correlations of Gpc4 expression with body mass index (BMI) and waist/hip ratio (WHR) in human adipose, which indicated that Gpc4 may play an important role in obesity and body fat distribution (5). Our recent study showed that the filial generation mice had higher epididymal adipose tissue weight and Gpc4 mRNA expression when the pregnant mice were exposed to low-dose di-2-ethylhexylphthalate (6), indicating that the Gpc4 gene may be involved in fat accumulation. However, the mechanism of how Gpc4 regulates fat distribution is still not understood.

Peroxisome proliferators-activated receptor γ (PPARγ), a major regulator of adipocyte differentiation, exerts an important role in fat accumulation. A study showed that the PPARγ agonist in vivo induces adipose tissue redistribution from visceral to subcutaneous fat (7). The mechanisms that have been proposed include the variation of the differentiation of preadipocytes from subcutaneous and visceral regions (8) and the depot-specific regulation of lipid uptake, storage and energy expenditure genes in visceral and subcutaneous fat (9–11). Another hypothesized mechanism is that PPARγ activation may affect the expression of the Gpc4 gene in subcutaneous and visceral adipose tissues that are involved in the regulation of fat distribution. Therefore, to verify the hypothesis, in the present study high-fat feeding (HF) C57BL/6J mice were treated with a PPARγ agonist rosiglitazone (RSG) and the effects of PPARγ activation in vivo on HF mice and the expression of Gpc4 mRNA and protein in epididymal and inguinal depots, which were used as representative of visceral and subcutaneous fat respectively, were assessed. The mice were also evaluated in vivo for two probable regulators of the Gpc4 gene, specificity protein 1 (Sp1) and Sp3 to explore the hypothesis that they, perhaps, to a certain degree, are involved in fat distribution regulation of Gpc4.

Twenty-one male C57BL/6J mice (weight, 18–22 g) were purchased from Shanghai SLAC Laboratory Animal Co., Ltd. (Shanghai, China). The animals were divided into three groups. Mice in the control (CON) group (n=7) were administered a standard diet containing 10% kcal from fat. Mice in the HF group (n=7) were fed with a home-made high-fat diet that contained 58% kcal from fat, 27% kcal from carbohydrate and 15% kcal from protein (12) for 12 weeks. The remaining mice were fed with a high-fat diet for eight weeks and then supplemented with the PPARγ agonist RSG (Sigma-Aldrich, St. Louis, MO, USA) at a dose of 10 mg/kg high-fat diet for an additional four weeks as the RSG group (n=7). The dose of RSG was selected based on a previously published study (13). RSG was mixed with the powder diet. Food and water were available ad libitum. All the mice were maintained with a control temperature of 20±2°C, a relative humidity of 50±10% and a 12-h light/dark cycle. Animal experimental procedures were conducted under an animal protocol approved by the Institutional Animal Care and Use Committee of China Medical University (Shenyang, Liaoning, China).

At the end of the 12 weeks, all the mice were sacrificed. The weights of the inguinal and epididymal fat pad samples were determined immediately, and subsequently stored at −80°C for reverse transcription quantitative polymerase chain reaction (RT-qPCR) and western blot analysis.

The total RNA of the subcutaneous and epididymal adipose tissues was extracted using RNAiso plus (Takara, Dalian, Liaoning, China) according to the manufacturer’s instructions. The reverse transcription and PCR reactions were performed using the ABI Prism Real-time PCR 7500 system (Applied Biosystems, Inc., Foster City, CA, USA) as described previously (14). β-actin was used as the endogenous control gene. RT-qPCR data were analyzed using the 2−ΔΔCT method (15). The sequences of the forward and reverse primers are listed in Table I.

All the data were expressed as the mean ± standard deviation. Statistical analysis was conducted by the Student’s t-test within the same group and one-way analysis of variance among different groups using SPSS 13.0 software (SPSS, Inc., Chicago, IL, USA). P<0.05 was considered to indicate a statistically significant difference.

{ label (or @symbol) needed for fn[@id='tfn2-etm-08-06-1813'] } Differences among the three groups were analyzed by analysis of variance. Data are presented as the mean ± standard deviation of seven mice.

Expression of Gpc4 mRNA and protein in subcutaneous and visceral fat

RSG, an agonist of PPARγ, exerts multifunction via the stimulation of PPARγ on a number of cell types (17,18) and is used clinically to treat type 2 diabetes mellitus. In the present study, a section of the results obtained were similar to previous studies (19,20). RSG decreased serum glucose and insulin, decreased the synthesis of leptin and triglyceride, and increased the synthesis of adiponectin (21). The results also showed that RSG promoted subcutaneous fat gain and had little effect on visceral fat accumulation, which implied that PPARγ activation in subcutaneous fat tissues exerts a higher ability to increase fat accumulation than that in visceral fat tissues in mice feeding with a high-fat diet. The possible mechanisms leading to the effects of RSG treatment include the differentiation of preadipocytes from subcutaneous regions being markedly augmented compared with that from visceral regions (8). However, another study showed that there was no difference in preadipocytes between subcutaneous and visceral sites and they were enhanced to the same extent by treating with RSG in the two depots (22). The second possible mechanism is that RSG treatment may be associated with the depot-specific regulation of lipid uptake, storage and energy expenditure genes in visceral and subcutaneous fat (9–11). These studies demonstrated that RSG treatment resulted in the increase in the subcutaneous fat accumulation and reduction in visceral fat accretion by stimulating lipid uptake in subcutaneous fat and increasing energy expenditure greatly in visceral fat. Another hypothesized mechanism is that certain developmental genes are differentially expressed in adipocytes derived from subcutaneous and visceral depots, which may play an important role in body fat distribution. Gpc4 is a gene known to exert a role in early development and pattern specification. However, a recent study identified Gpc4 as a novel adipokine capable of enhancing insulin signaling and modulating adipocyte differentiation (23), indicating a potentially important role of body fat regulation. Gesta et al (5) demonstrated that different adipocyte precursors are responsible for a specific fat depot development and may be involved later in the functional differences observed between visceral and subcutaneous adipose depots. The present study showed that in all groups the expression of Gpc4 mRNA and protein was significantly higher in visceral than in subcutaneous fat, which was similar to a previous study that indicated a difference in Gpc4 expression in subcutaneous and visceral adipose tissues (5). The mice treated with RSG were also found to have increased Gpc4 mRNA and protein expression levels in subcutaneous fat compared with untreated HF mice, but no difference was measured in the visceral depot between HF and RSG-treated mice. Thus, the present results indicated that the levels of Gpc4 mRNA and protein expression in subcutaneous adipose tissue were associated with PPARγ activation, and may play an important role in fat distribution. Indeed, the expression of Gpc4 in subcutaneous fat has a strong correlation with BMI in humans, and high levels of Gpc4 expression in visceral adipose tissues and low levels in subcutaneous adipose tissues appear to be linked with high WHR (5). In addition, circulating Gpc4 levels had a significant positive correlation with the WHR and the ratio of visceral to subcutaneous fat area, indicating the association of Gpc4 with body fat distribution and insulin resistance (24).

In conclusion, PPARγ activation was demonstrated to increase the Gpc4 mRNA and protein expression in subcutaneous adipose tissues but had no effect on visceral adipose tissues, which was consistent with the change of the ratio of Sp3/Sp1 in these depots. The present study indicated that Gpc4 may play an important role in fat distribution, and this effect is possibly regulated by the ratio of Sp3/Sp1 in the subcutaneous and visceral fat tissues. 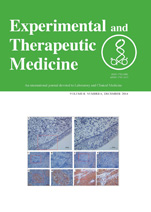