To investigate the role of oncogenes in the development of metastatic ability, the Ha-ras oncogene was transfected into murine kidney cell line NRK and an alternative murine cell line C127 cells. The resulting transfectants, NRK-Ha and HC127, were assayed for their invasive capability in an in vitro invasion assay and compared with their parental cell lines. All transfected cells were demonstrated to express a 0.6 kb mRNA for the ras oncogene by Northern blot analysis. Using a modified Boyden chamber, we showed that the motile ability of the cell lines, transfected versus non-transfected, were not altered by the introduction of the Ha-ras oncogene. However, ras transfected NRK-Ha cells were able to penetrate and invade through an artificial basement membrane coated filter when compared with the non-transfected parental cell line. Neither the C127 cells nor its ras transfected HC127 cells were able to migrate or penetrate through an artificial basement membrane coated filter. Using immunoblot analyses, we determined that invasive NRK-Ha cells expressed a mature form of protease cathepsin B with a molecular weight between 25-28 kD. Furthermore, using subcellular fractionation and immunoblot, we localized this mature form of cathepsin B to the plasma membrane fraction of the invasive NRK-Ha cells. The plasma membrane fraction of invasive NRK-Ha cells was able to degrade basement membrane components such as fibronectin and the patterns seen were similar to those of purified cathepsin B degradation. Non-invasive NRK, C127 and HC127 cells had only the precursor form of cathepsin B with a molecular weight between 38-45 kD and were unable to degrade basement membrane components. We suggest that the presence and expression of the Ha-ras oncogene alone does not confer metastatic capability, but rather that the ras oncogene must signal specific intracellular redistribution of proteases such as cathepsin B in order to promote tumor cell invasiveness. 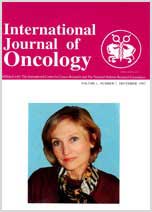