Conversion of normal human oral keratinocytes to tumorigenic cells is associated with the acquisition of resistance to TGF-beta.

Normal human epithelial cells cannot proliferate and undergo apoptosis in the presence of transforming growth factor-beta (TGF-beta) in vitro, but many human epidermoid cancer cells are resistant to TGF-beta. Resistance to TGF-beta may thus, in part, be responsible for uncontrolled proliferation of cancer cells. Though detailed mechanisms for the resistance of cancer cells to TGF-beta remain unknown, resistance may be due to decreased expression of TGF-beta receptors from cancer cells. To investigate this possibility, we determined the expression of TGF-beta and type II TGF-beta receptor in primary normal human oral keratinocytes (NHOK), human papillomavirus-immortalized human oral keratinocytes (HOK-16B) and two tumor cell lines derived from HOK-16B (CTHOK-16B-BaP and CTHOK-16B-DMBA). Our results show that (1) the cellular and secretory TGF-beta levels in immortalized and tumor cells were notably lower than in NHOK and (2) the level of type II TGF-beta receptor of the tested cells was similar to each other. Taken together, the conversion of NHOK to tumorigenic cells may, in part, be due to the acquisition of NHOK resistance to TGF-beta through underexpression of this cytokine. 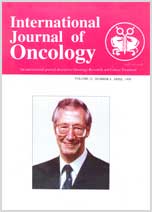