Although strong evidence is mounting that telomerase reactivation and the thereof resulting stabilization of telomeres is a major mechanism for human cells to overcome replicative senescence, a causal relationship linking telomerase activation conclusively to tumorigenesis remains to be established. Thus, the possibility exists that telomerase activation is passively co-selected as tumors develop. To elucidate the function of telomerase during tumorigenesis, we followed telomerase reactivation during immortalization of human primary cell types with in vitro transforming agents and determined the tumorigenic potential of these cells at various stages of transformation. The effects of SV40, v-Ki-ras, HPV-18 and HPV-16 E6/E7 oncoproteins on telomerase expression was examined in primary and immortalized human prostate epithelial (HPE), human prostate fibroblast (HPF), and umbilical vein endothelial cells (HUVEC). All of five SV40-transformed HPE and HPF lines were telomerase positive and had shorter telomeres than primary cells. The two HPV-18 immortalized HPE cell lines also expressed telomerase activity. In contrast, E6 or E7 alone could not produce immortalized HUVEC and did not reactivate telomerase. Life-span, however, was extended. The E6/E7 immortalized HUVEC had telomerase activity and short but stable telomeres. HPE, HPF or HUVEC cells which had been transformed by one oncoprotein alone were not tumorigenic although they had overcome cellular senescence and re-activated telomerase. However, if these cells were transformed by a second agent, either infection with v-Ki-ras or X-ray treatment, they were able to form tumors in nude mice. This suggests that tumorigenesis is a multistep process and that telomerase activation alone is not sufficient for malignant transformation in human cells. 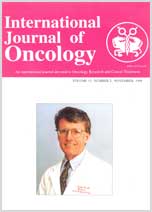